5 key trends in US shellfish aquaculture 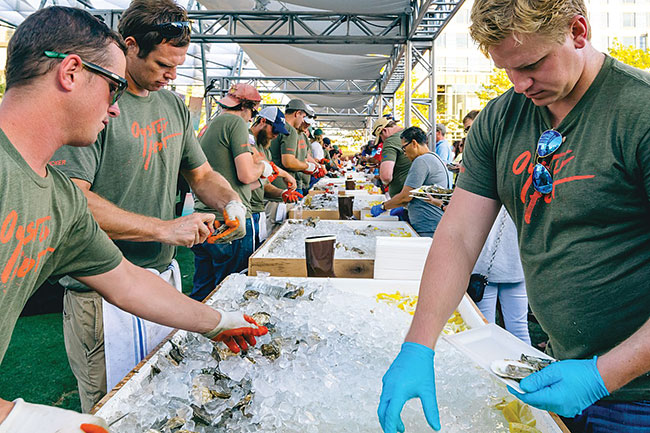 Shuckers at an Island Creek oyster festival. Savvy marketing has increased consumer demand for oysters in the US Credit: Natasha Moustache

Given the subtle surprises of merroir, plump meat and none of the silt found in their bottom-grown wild cousins, plus a host of environmental benefits—it’s no wonder consumer appetite for farmed shellfish is increasing.

But these inherent qualities did not do the sales job alone. Strong marketing, industry educational efforts, and operational gains have driven US sales of mollusks to surge 34 percent in the last five years, according to the 2018 Census of Aquaculture recently released by the US Department of Agriculture (USDA).

Aquaculture North America (ANA) has rounded up some of the trends growers are talking about, along with input from scientists and industry experts who gathered for the 40th Milford Aquaculture Seminar in Connecticut in January.

Oyster’s eco credentials appeal to younger consumers
Over the last decade, leading companies have transformed oysters into lifestyle brands—“de rigueur for a warm summer day with a glass of rosé,” as Massachusetts-based Island Creek Oysters president Chris Sherman puts it. This species now accounts for 64 percent of total mollusk sales.

Growers have moved from shucking at a few restaurants to owning their own franchise-extending raw bars, full-service restaurants, and farm stores. Among leaders, a promotional mix may feature e-commerce, earned media and digital marketing, and events, such as oyster fests, shucking contests, and farm tours. Island Creek, which now supplies 41 states, has appeared at South by Southwest, Art Basel, and the Newport Jazz Festival.

Such marketing created “an awakening of a sleeping demand” for oysters among younger consumers that goes deeper than gastronomical culture, Sherman says. “It’s a product that they can feel good about because of its services rendered to the environment and coastal communities.”

“Environmental mindfulness is more important than ever,” adds Graham Watson, a four-year veteran of California’s Hog Island Oysters who started West Passage Oyster Company in Rhode Island in 2016. Talking about the farm’s tours—offered year-round— he says, “We love bringing people out to talk about the ecosystem and educate them on where their food is grown.”

With regulatory progress, an influx of new farmers
While the number of mollusk farms has grown steadily overall, it’s ballooned in certain states, like Virginia and Maine where the USDA reported increases of 90 and 146 percent respectively from 2013 to 2018. State leases suggest even more robust counts.

In Maine, many new farmers have been able to get their feet wet because of the relative ease of acquiring Limited Purposed Aquaculture (LPA) licenses. With no scoping or public hearings, approval is granted in just a few weeks, though it’s limited to certain species, only one year, and a small footprint of under 400 square feet.

In Mississippi, response to the Department of Marine Resources’ maiden offering of an Oyster Farming Fundamentals course in 2018 has been very good and some of the students have become full-fledged farmers.

Another step forward has come through an initiative of NOAA Fisheries that yielded permitting data on 22 states. Because some states have already solved some problems others are still grappling with (such as having a one-stop permitting website) this compendium is helping foster discussions among states and spur progress, says Kevin Madley of NOAA.

Through non-profit Manomet, the technique of Jordan Kramer (pictured) in growing quahogs is being shared with other farmers. Peer-to-peer mentorship programs are trending up in shellfish aquaculture

Cooperation, not competition
To counter the knowledge gap about regulations and more, CEI, in tandem with other Maine aquaculture organizations, offers a free, 12-week course, “Aquaculture in Shared Waters,” which started in January. For the first time in its eight-year history, the program is being live-streamed to a second training location in Maine. The organization taps experienced oyster, mussel, and seaweed growers to speak.

“They lower the bar and reduce the learning curve,” Cowperthwaite says.

“The best person to learn from is someone who’s already been through it all,” echoes Dr Allison Colden of CBF.

This program, still shy of its two-year anniversary, matches a newcomer with a veteran grower based on geography and cultivation methods. “We had no idea what the reception of the existing farmers would be to new people coming into the industry,” says Colden. “But they’ve been very eager to help…supportive and collegial. At this point, they don’t see them as somebody who’s coming in to knock them out.”

As farmers seek to boost production, technology can also help. “Five years ago, we were intent on growing the farm to scale, with an expanded lease. That’s a different beast,” admits Abigail Carroll, founder of Nonesuch Oysters in Maine. “An employee begged for Oyster Tracker because it was more user-friendly.”

This software system, launched in 2018, visualizes production, provides activity alerts, and simplifies regulatory reporting. Today, it’s deployed in 10 US states, Prince Edward Island in Canada, and Ireland. “It was a game changer for my team,” says Carroll.

Another example: the ear-hanging technique of growing scallops, developed in Japan and tested in Maine’s waters some three years ago, has been adopted at four Maine farms and will enter a fifth trial this summer. The technology transfer, which includes a significant investment in specialized equipment, is a CEI-sponsored effort to bring that high-value crop to the state.

Students of the maiden offering of an Oyster Farming Fundamentals course in Mississippi in 2018 have since become full-fledged farmers Credit: Russell Grice

Diversification—on everyone’s lips
Another reason shellfish farming is surging is because commercial fishermen—whether they catch lobsters in Maine or blue crabs in Maryland—are turning to aquaculture as a hedge against climate change and regulatory issues. It’s a way to diversify income.

Bangs Island Mussels, which acquired Calendar Island Mussels last November to meet growing demand for mussels, has been a leader in diversification. In addition to testing sea scallops, this Maine mussel grower is co-culturing sea kelp.

It’s a move with another benefit: biodiversity. According to the Island Institute, farmed mussels located near kelp have stronger shells and larger meats.