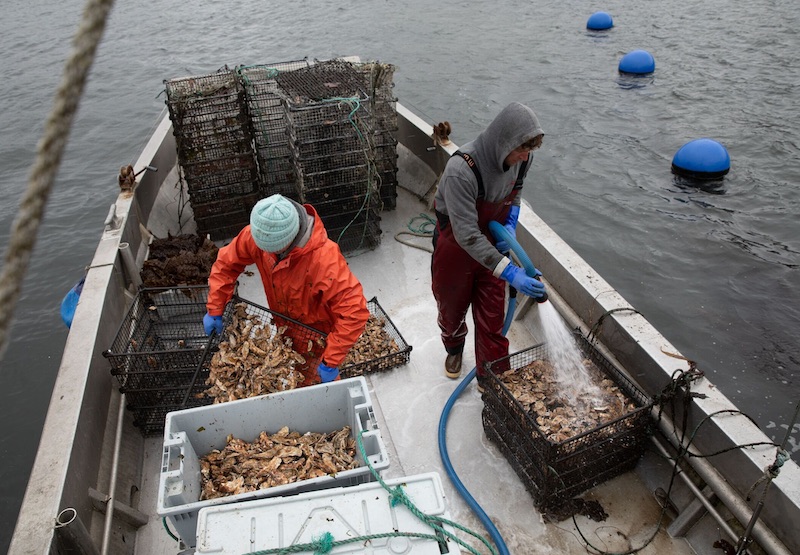 Phasing out the state’s subsidy for pathogen testing would effectively put us out of business, says Weatherly Bates of Alaska Shellfish Farms.

A proposal to end state subsidies for shellfish-pathogen testing will hurt Alaska’s shellfish industry if approved, say the state’s farmers.

Like other oyster growers, Greg and Weatherly Bates send oyster samples to a lab in Anchorage for testing for paralytic shellfish poisoning (PSP) weekly for half of the year and monthly in the winter. Growers pay for shipping to the lab and the Department of Environmental Conservation (DEC) pays the testing fees, which DEC estimates to be around $500-$700 per test.

DEC Commissioner Jason Brune proposed to phase out the subsidy after Alaska Governor Michael Dunleavy proposed to cut the $700,000 per year budgeted to DEC for shellfish toxin testing.

Bates, owner of Alaska Shellfish Farms, based in Halibut Cove, AK, estimates that paying for the tests themselves will increase the farm’s operational costs by 50 percent. “The proposal to scrap funding for testing would be catastrophic to our industry. Without subsidy our shellfish industry will end because business in Alaska relies on a narrow margin to operate,” she said.

Oyster growers and geoduck harvesters have been getting the subsidy for the past 10 years. Bates says the health of Alaskans who consume wild shellfish will also be at risk if the proposal is approved.

She explained: “Alaska is the only Coastal State to my knowledge that does not regularly test shellfish for paralytic shellfish toxins despite a long history of illnesses, death and shellfish subsistence in Alaska. The State offers no advise other than ‘know before you dig.’ Our testing saves lives because when we find elevated toxins we notify the public through non-profits and people do not go out and recreationally harvest potentially deadly shellfish.”

Alaska Fisheries Development Foundation (AFDF) executive director Julie Decker says eliminating the subsidy will mean $250,000 of the shellfish industry’s measly $1.5 million revenue will go to PSP testing. “That’s a big chunk of the annual revenue and that’s just for one type of activity. They’ve got other types of expenses,” Decker said.

At the annual conference of the Alaska Shellfish Growers Association in January, a representative from the Office of the Governor heard the shellfish growers’ concern about the proposal.

“After he heard the significant impact it would have on farmers, the representative said that it’s possible that the administration wasn’t clear about the large impact the proposal would have,” said Decker. “So I think there’s going to be a lot of discussion about it throughout the next few months during the legislative session.”

Shellfish growers were talking to their legislative representatives as of press time.