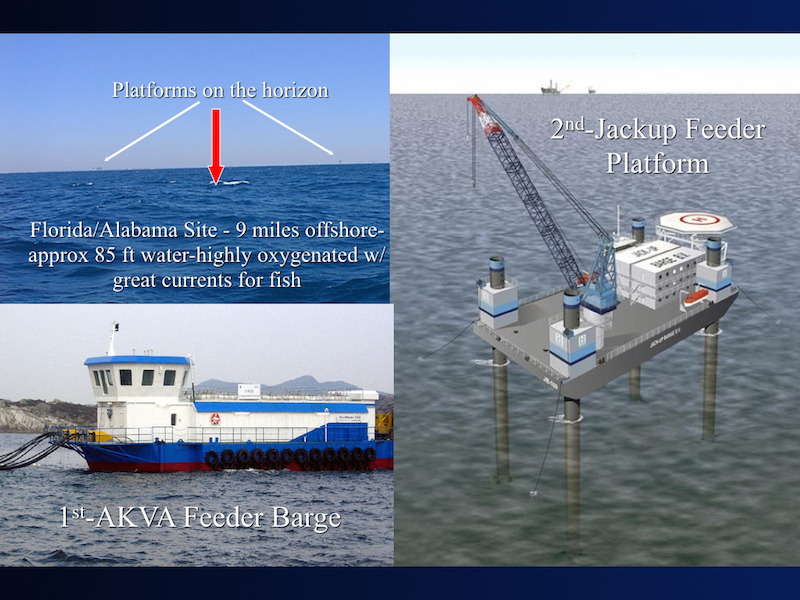 Americans are really into seafood. The US, however, produces only five percent of what it consumes, making it the world’s biggest importer of seafood.

What is more interesting, though, is that it is blessed with 95,471 miles of national marine coastal resources.

Considering the volume of US seafood consumption and its extensive shorelines, why is the US aquaculture industry not as extensive?

An industry expert, inventor and fish farming developer, minced no words when he answered this question.

“The exhaustive permitting process with state and federal agencies and the lack of interest by other established foreign seafood producers to enter the heavily litigious US business world makes investment in Gulf of Mexico fish farming speculative. The US legal system can strike down any existing or proposed fish farming operation by some unfriendly person or organization filing a lawsuit,” explained John Ericsson, Gulf Marine Institute of Technology (GMIT) CEO and managing director since 1995.

First of its kind

Ericsson may also have the answer to how a major mariculture project may stay afloat profitably in such conditions with the FlorAbama Marine Sea Farming Project.

The project will be located 10 miles south of the Florida-Alabama state line. This site is within an approximately 500-acre area in the Gulf of Mexico designated by the government for commercial fish farming.

“It is the first and only currently permitted commercial 27.5-acre fish farming project approved to do business by the US Army Corp of Engineers and US Environmental Protection Agency (EPA) to do offshore fish farming in the Gulf of Mexico. This project allows the opportunity to start a real sea cage farming project with the pre-established ability to expand operations as long as you follow the permit requirements,” he said.

GMIT is a federally and publicly supported 501-C-3 nonprofit research institute that was formed in 1995 to study and implement technologies to grow native finfish as well as provide clean, healthy oysters using jack-up and stationary offshore oil platforms in the Gulf of Mexico.

GMIT intends to acquire commercially proven submersible sea cages for fish grow-out operations and a feeder barge manufactured in Norway to provide automated fish feeding and other systems for the project.

ExportFinance of Norway has an export credit guarantee for Norwegian fish farming sales and imports to the US for up to $10 million.

GMIT will acquire an oil jack-up barge/platform from the oil industry to provide a safe operations base and house onsite operations staff and management team.

Under the plan, GMIT will build a $96-million 134,000-foot million marine hatchery in the Florida/Alabama region. This multi-species, recirculation fingerling facility will produce millions of fingerlings to supply the cage culture fish and shrimp farming operations. It will also help replenish the natural fisheries, which was harmed by the BP oil spill in April 2010.

The use of submersible cages and the latest fish farming technologies is a key component of the project.

During specific operations such as harvesting, grading, defouling and close inspection, the cage system can be deballasted and/or lifted out of the water using the jack-up platform crane.

“The FlorAbama project is committed to eventually produce ‘organic’ seafood. We intend to use the latest organic farming solutions and fish meal/oil substitutes for food supply and health maintenance, including using marine Nanno C algae food supplements that we have built with US-patented systems for growing commercial volumes,” Ericsson said.

He added: “Great planning, knowledge and deep financial commitments will be in place from the start-up to commercialization process.”

Year One harvest projection is at 1.5 million lbs of cobia, amberjack, red porgy and redfish and Year Three, 11.2 million lbs.

The ambitious project is two decades in the making. “I have traveled the world for 20 years meeting with the best public aquaculture companies in Greece, Japan and elsewhere for establishing a successful development plan for the new mariculture industry in the Gulf of Mexico and the US.

“With appropriate funding, things will start happening very rapidly in the Gulf to make this infant industry a reality. We intend to use the best offshore fish farming systems in the world with the best foreign, established, fish farming companies providing knowledge and technology to grow fast-growing gulf seafood like amberjack, cobia, red porgy and gulf shrimp,” he said.

In April, GMIT kicked off its crowdfunding at https://www.crowdfunder.com/gulf-marine-institute-of-techn to raise the funding goal of $2 million to launch the project. GMIT intends to raise up to $10 million in start-up capital, with USDA Rural Development Agency project loan guarantees available for another $10 million.

Ericsson believes the investment opportunity is strong. There is a “huge US market” for premium quality, fresh organic seafood valued at $5 billion annually. Typically, he said, foreign suppliers are unable to cater to this demand because of the use of chemicals in their farming and processing procedures, which are not allowed by US standards.

“Our seafood will be inspected and approved by USDA inspectors located in existing Bayou La Batre, Alabama, seafood processing plants,” he said.

Ericsson expressed confidence that seafood sourced from US waters would make a difference to US consumers, “considering the questionable and often illegal methods used in growing and processing seafood in other unregulated sea food producing countries.”

He added: “I think the bulk of this sea farm capacity will be taken by quality-minded US seafood purveyors, restaurants and other upscale fresh seafood market outlets like Whole Foods and Publics.” Some flash-frozen products would also be available, initially to the US market.

Looking beyond US shores, he sees potential in foreign markets such as the high-end Japanese seafood market, which had earlier expressed interest in buying GMIT’s fresh, air-shipped, Gulf-farmed seafood.

Meanwhile, Ericsson is waiting for the crowdfunding and other initial funding efforts to hit the start-up funding target.

“We will get funded eventually either by BP fine funds, state and/or federal coastal restoration funds or investors,” he said. “Our project is the highest and best use of the $18.7 billion in BP in federal fines recently awarded to the Gulf states and feds to offset the marine damages created by the BP oil spill disaster.” (See side bar).

Ericsson estimates GMIT will hit its $10-million sales target two to three years from the establishment of the hatchery and the start of fish farming operations. But he is in no rush. “I have already waited 20 years to get all the factors right and necessary for a commercial success,” he said. “I’m a hard-headed, determined Swede, who does not give up or fail to accomplish what I started with my many friends and investors since 1985.”

The world saw the largest marine oil spill in history in April 2010 when the BP Deepwater Horizon oil drilling platform in the Gulf of Mexico blew out. It polluted an estimated 1,100 miles of shoreline and extensively damaged the ecosystem and marine life.

As a result, GMIT was forced to abandon the 2010 launch of its offshore fish farming project. Consequently, GMIT filed a massive multi-million lawsuit against BP and all parties liable for the disaster. GMIT’s federal lawsuit is still pending release.

Settlement proceeds are pledged to the FlorAbama project.