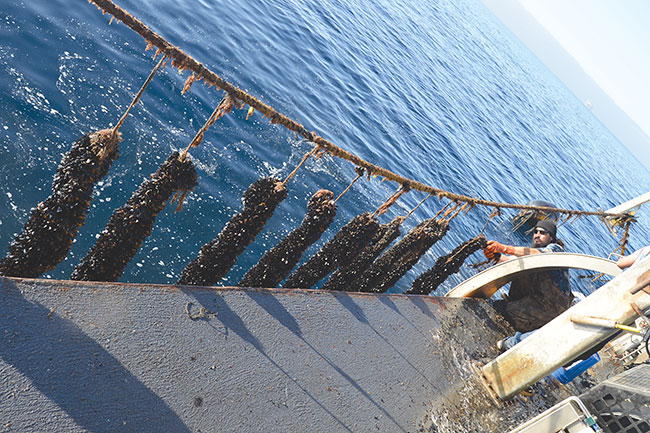 Calling it “an opportunity too good to ignore,” NOAA scientists are giving a thumbs-up to offshore mussel farming in the Northeast United States based on new research and a trove of data. The news signals a step forward on how to chip away at the $15 billion US seafood trade deficit.

Serial entrepreneur Phil Cruver claimed “first mover” status in the space in 2012 when he founded the 100-acre Catalina Sea Ranch off Long Beach, California. Despite waves of publicity since, regulatory and funding concerns have given entrepreneurs the jitters such that only research trial farms have followed.

But this new strong scientific basis for offshore mussel farming could be the first step in changing all that.

The researchers at the Milford Laboratory, part of NOAA’s Northeast Fisheries Science Center, have authored a series of papers—including one yet-to-be-published—that give prospective aquaculture entrepreneurs “fundamental knowledge” for farm planning, as well as a broad overview of environmental, economic, and social issues.

Study taps into data, farm experiments
Notable in the research is a study that assessed water temperature, currents, and food availability in the Exclusive Economic Zone (EEZ) off Long Island, New York, Rhode Island, Massachusetts, and New Hampshire. The lab believes that this is “the first work that uses historical series of environmental data and examines a large extension of the Northeast US coastal shelf ecosystem.”

“The exciting finding was that every latitude and longitude is suitable for mussel farming at some depth, with optimal depth varying according to location and season,” says Dr Gary Wikfors, lab director and one of the authors. One result of the study is a prescription of sorts for the best depth at which to submerge longline and mussel ropes. To validate the recommendations, researchers measured mussel performance at an experimental farm offshore Cape Ann in Massachusetts.

“We also recognized the potential to use depth adjustment of farm design to mitigate expected warming from climate change,” adds Wikfors. “So, we found a larger-than-expected opportunity with what appears to be long-term sustainability.”

Another paper published in the series examines the risk from harmful algal blooms (HABs), concluding that “blue mussel farms in federal waters can thrive in spite of blooms initiation offshore.” When exposed to toxins, researchers have learned, blue mussels recover more quickly than other bivalves, such as oysters.

One study recommends the best depth at which to submerge longline and mussel ropes Photo: NOAA Fisheries/Mark Dixon

Darien Mizuta of the NOAA Milford Laboratory studying the performance of blue mussels offshore. Mizuta was the lead author of a new study that yielded fundamentals for farm planning Credit: Milford Lab

Why offshore mussel farming
NOAA’s 360-view of issues is good news for New Englanders, whose fishing heritage—both jobs and local culture—may be threatened by climate change and a growing waterfront population. “Growth in seafood production is dependent upon aquaculture,” the authors argue.

And going offshore reduces the competition for space along the coast, pushback about visual impact, and concerns about water quality. Issues about damaging bottom sedimentation are mitigated at greater depths with higher water circulation, they note. The probability of disease spread is also diminished.

In a win-win scenario for clean energy and aquaculture in New England, the Milford authors envision a co-siting, in which mussel growers could take advantage of wind farm platform structures and use space between turbines. Rhode Island currently hosts an active windfarm, with such facilities in Maine, New Hampshire, and Massachusetts in various stages of leasing and construction planning.

Risks and frustrations
But, as Cruver has learned, the myriad of regulations can be frustrating. For example, because there is no consistent requirement, the depth of submerged farming structures must be decided case-by-case during permit review.

Other impediments exist, including the availability of mussel seed, but the largest question is: If Northeast farmers grow more mussels, will consumers buy them? Currently, American appetite for the bivalves significantly lags that of other markets. As reported in Aquaculture North America (ANA), US annual consumption is only 0.15 lbs per capita, compared to 5 lbs in Europe and 33 lbs in New Zealand.

But in this area, too, Wikfors is optimistic. “The success of Prince Edward Island mussel farming has created a new market for mussels in the northeast US that is growing beyond the production capacity of PEI,” he says. “This is the dynamic making domestic mussel farming attractive economically.”

The conclusion: It’s not a question of “whether to,” but “how to.”