Equipment that gather data, technology that makes sense of that data and software that predict potential outcomes are going to be the focus of R&D efforts Photo: Cooke Aquaculture

Analytics software, networked sensors and even new gene editing tools will continue to transform the aquaculture industry. For some fish farming operations, technology adoption could mean the difference between thriving and just surviving.

As aquaculture companies navigate a post-pandemic world, technology will become a key partner in meeting various challenges along the way, say industry experts.

Economics, environment drive adoption
In the last decade, technology has helped fish farming operations boost productivity and efficiency. Emphasis on the use of technology to lessen the impact on the environment, is now coming to fore, according to Dr. Stephanie Colombo, Canada research chair in aquaculture nutrition and assistant professor at Nova Scotia’s Dalhousie University.

There will be more pressure on farmed seafood producers to be more accountable for their impact on the environment, she says. In the next decade, she sees technology playing a greater part in assisting these operations reduce their carbon footprint as well as help them deal with the rapidly changing environment.

“Overall, the use of new and emerging technology will continue to have a positive impact in the industry,” says Colombo. “The key drivers are going to be economic and sustainability in nature.”

Some of the technologies ACFFA is seeing on fish farms these days include Artificial Intelligence-driven systems that monitor fish and the marine environment in real time. These systems can track various parameters such as oxygen levels, algal blooms and water temperatures, estimate fish biomass, fish health, tide and wind conditions, as well as tension on mooring lines and the strength of currents. Other areas of development are remote feeding systems that enable trained personnel to feed the fish and monitor multiple farms from on-land location; fish-transfer and parasite detection systems.

Sensors and predictive tools
Equipment that gather data, technology that makes sense of that data and software that predict potential outcomes are going to be the focus of R&D efforts, according to Jonathan Grant, Natural Sciences and Engineering Research Council – Cooke Industrial research chair and professor of oceanography at Dalhousie.

“We are going to see more improvements and continued interest in networked sensors that provide real-time data on factors such as water temperature and oxygen levels. The Internet of Things (IoT) will see further implementation in aquaculture facilities,” he says.

“Sensors will not only become better at telling us about the environment of the fish but will also tell us how it is affecting the fish and how the fish are reacting to it.”

He cited Innovasea Systems Inc. as one of the leaders is this field.  The company is one of the trailblazers in the use of acoustics telemetry in gaining insight into aquatic animal behaviour.

“The tags detect how the fish are behaving and the environmental sensors tell the farmer why they are behaving that way,” says Grant.

The tags also enable fish farmers “determine when and where the oxygen is low. So, this tells you when and where you should turn on or turn off the O2.”

AI-enhanced feeding
With fish feed accounting for at least half of a farm’s expense, it’s critical that operators get it right.

“Thankfully there are now AI-enabled tools that help farmers monitor fish weight and size, feeding behaviour, and also help determine just how much to feed the fish,” says Colombo.

ReelData cameras placed inside fish tanks gather data on fish waste and fish behaviour. ReelData identifies uneaten feeds in real-time. The tool calculates the “appetite of a tank” and then interacts with a facility’s application programming interface (API) to adjust feeding.

The product also reports on feeding patterns and provides farmers insight on over- or underperforming tanks and the patterns that cause such performance. 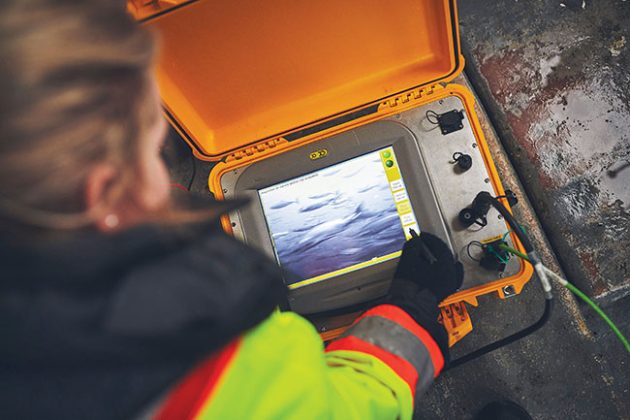 For some fish farming operations, technology adoption could mean the difference between thriving and just surviving Photo: NAIA

Disease management
Sea lice and other aquatic parasites costs the aquaculture industry billions of dollars each year. An infestation can start out as a minor inconvenience affecting fish health but it can rapidly evolve into something that causes a massive die off.

The control of sea lice and other pathogens is an area where technology can certainly help, according to Colombo.

Scottish company Ace Aquatech has developed a modular, mechanical lice-removal system. The system is currently being tested and is planned for release in 2022. It uses a low-voltage electric field and water jets to remove lice and eggs as tiny as 50 microns from the fish. It combines low-voltage electric fields, water jets, and a minimal thermal treatment in the final stage de-waterer.

Housed in a containerized design, the system can be attached to small workboats. This makes the system ideal for localized deployment or deployment of several units in different locations.

Underwater microbubble barriers have been used to block microorganisms and algal blooms from entering fish farms. However, there has been no publicly available data on the method’s effectiveness.

Bruno Lopez, general manager at PSP Solutions, believes the experiment will enable his company to further improve the system’s design.

Another emerging technology to watch out for, according to Colombo, is the use of CRISPR-Cas9 gene editing technique in fish. The technique involves cutting a cell’s genome at a desired location. This allows undesirable genes to be removed. Using the same technique, new genes can also be added.

“There will likely be interest in using this gene editing technique in enhancing fish size and weight,” says Colombo. “However, I am more interested in finding out how CRISPR can be used to improve fish resilience.”

She says development in the area of how gene editing can be used to edit out weakness to diseases is something worth looking out for.

Prepping for a tech revolution
Prepare for more technology innovations to spillover into a fish farm near you.

Anthony Fadell, co-inventor of the iPod and iPhone, says in a session during the event:

“There will be early adopters, laggards and people in the middle, but at the end of the day everyone cares about return on investment.”

In an interview with The Advocate, Fadell, who is principal at global advisory and investment firm Future Shape, says there will be successes and failures among these adaptors but “now is the right time for this revolution to occur in aquaculture.”