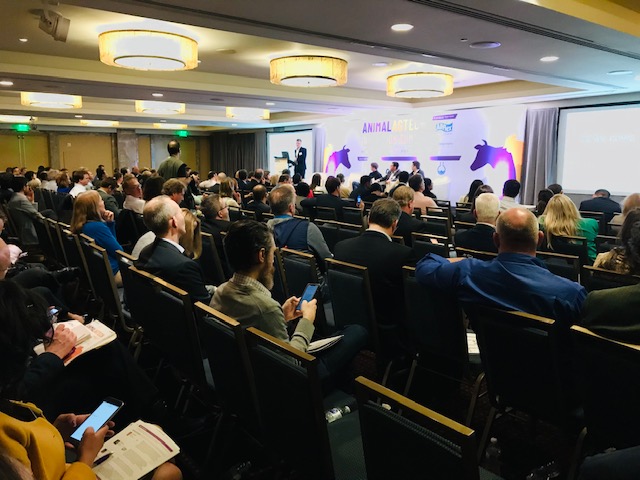 The inaugural Animal AgTech Innovation Summit was held in San Francisco in 2019. This year, the event was held online.

Beef, chicken, pork and seafood farmers often compete for consumers’ attention and wallets but at the 2021 Animal AgTech Innovation Summit on 8 March, they united under the animal protein producers banner to reflect on the positive developments that emerged from a devastating year.

The annual Animal AgTech Innovation Summit moved online this year and saw its biggest attendance since its debut in 2019. A total of 576 players in animal agriculture from 35 countries heard 81 experts speak at 22 conference sessions, said the organizer, Rethink Events.

Human resilience in the face of adversity, the impact of innovation and technology, and the durability of food systems are the three powerful forces that emerged from 2020, said keynote speaker Jeff Simons, CEO of Elanco.

“We say that the food system bent but it didn’t break,” echoed Erin Fitzgerald, a panelist from the advocacy group U.S. Farmers and Ranchers in Action, adding that “unbelievable collaboration” made this happen.

The crucial role of technology and innovation in solving some of the world’s greatest problems (think COVID-19 vaccines), such as reducing greenhouse gas emissions, keeping food systems safe, protecting people and enhancing productivity, became the dominant theme in the conference sessions.

In the aquaculture track, innovations in feed hold the key to the industry’s sustainability, said the panelists, which included Johann Andreassen of Atlantic Sapphire, David Kelly of Innovasea, Clement Ray of Innovafeed, and Larsen Mettler of S2G Ventures.

All four agreed that aquaculture is already the most sustainable form of animal protein production but innovation in feed that have a much lower carbon footprint than conventional feed will make it even better, said Andreassen.

He said Atlantic Sapphire will be “fully out of the ocean” in two to three years from now, meaning that it will be using alternative feeds that are not dependent on fishmeal or fish oil. “It’s the last piece that remains (to address) to be fully out of the oceans. We are working with multiple companies in innovating feeds that eliminate the use of marine ingredients,” he said.

Innovations in instrumentation in order to provide real-time data on both environmental conditions as well as feed feedback to optimize the operation of farms will help farmers produce protein as most efficiently as they can, suggested Kelly of Innovasea.

Producing seafood closer to the consumer, which will reduce emissions from transportation will further enhance the industry’s sustainability, the panelists said.