Who’s in charge of Canadian aquaculture? In British Columbia, where Atlantic salmon farming brings in over $1.5 billion annually to the province’s economy, the Canadian government is the primary regulator. Provincial governments are otherwise the primary regulators in other provinces, with involvement of the Fisheries and Oceans Canada (DFO) in a number of aspects.

“Aquaculture in Canada is a bit complex in terms of jurisdiction across the country,” he said at the conclusion of the two-day 2018 Canadian Council of Fisheries and Aquaculture Ministers (CCFAM) meeting, which brought together ministers with statutory responsibilities over fisheries and aquaculture in federal, provincial and territorial levels.

The push for a federal Aquaculture Act by Canada’s seafood farmers aims to simplify the framework. The ministers expressed support for and commitment to the proposal. The Aquaculture Act, they said, “gives expression of the legitimacy of aquaculture as legitimate user of the marine environment.”

“We have directed our officials to develop federal legislation that will respect federal, provincial and territorial jurisdictions and provide greater parity for industry. That federal legislation will ensure Canada’s aquaculture sector is a global leader in producing quality aquaculture product in an environmentally sustainable manner.

“In taking advantage of these opportunities, we are working together to solve the challenges ahead that will make Canada respected throughout the whole world when it comes to sustainable products from the ocean,” Wilkinson, CCFAM chairman, told the press.

Part of the Aquaculture Act would be a commitment of and a recognition by all parties “that we need to have greater commonality of standards across the country; that we need to be working towards ensuring that we are enhancing transparency in terms of how things are done; and providing greater certainty to the industry that investments in different parts of the country will be done on similar terms,” he said.

Wilkinson said however that this in no way means that the federal government will usurp the regulatory authority of provinces where the provincial government is the regulator. “There’s no intention on the part of the federal government to invade jurisdiction. There are mechanisms through which we can ensure that provincial jurisdiction where the provinces are the primary regulators will continue to apply. But greater consistency in a country like Canada is good for industry and is good for ensuring environmental sustainability. And it also allows us to convene a conversation that allows us to discuss things like best practices to ensure were doing everything that we can that to grow the industry in an environmentally sustainable way.”

The Canadian Aquaculture Industry Alliance (CAIA) welcomed the support of the ministers to advance the legislative development process for an Aquaculture Act in Canada.

“The timely development and passage of a federal Aquaculture Act is the most important and overriding need for the sustainable and competitive growth of aquaculture in Canada,” explained Timothy Kennedy, CAIA President & CEO. “There is such incredible opportunity for this young and innovative sector in Canada. This important support from Ministers is very much appreciated and will provide a fresh look at seafood farming in Canada. Canada remains the world’s only major farmed seafood producing country without modern national legislation specifically designed to govern a responsible and sustainable aquaculture industry.”

While the ministers recognized seafood farmers are already doing global best practices, there appears to be an intent to make regulations stricter under an Aquaculture Act. Kennedy welcomed them, saying: “We are already amongst the most sustainable producers in the world, and are happy to compete to be even better.” 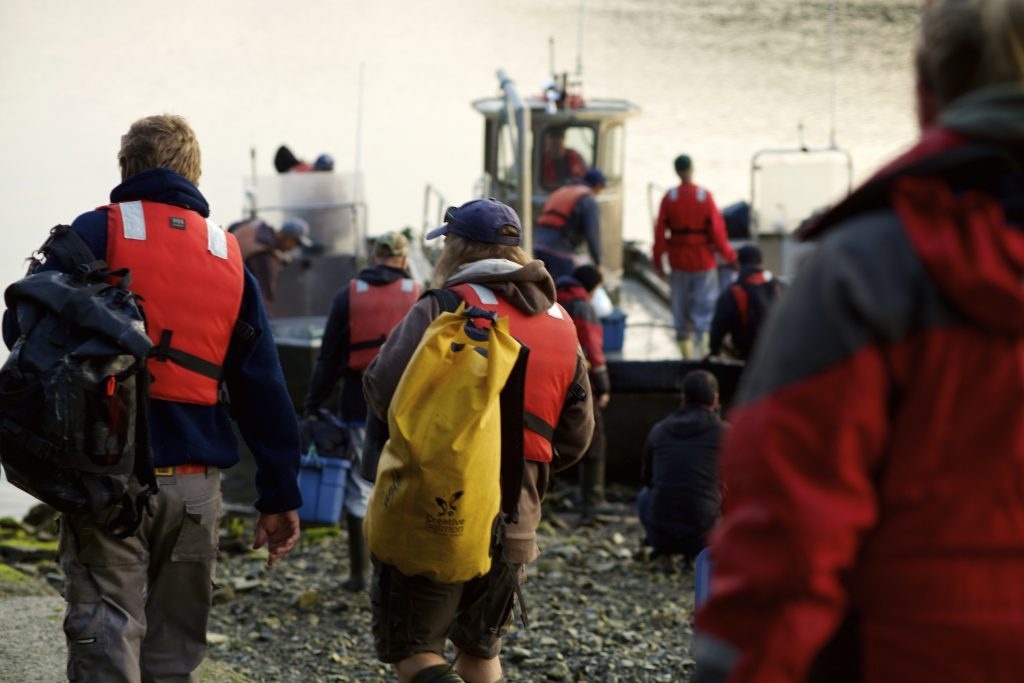 BC salmon farm workers heading to the boat that will take them to the farm. CCFAM ministers say the Aquaculture Act “gives expression of the legitimacy of aquaculture as legitimate user of the marine environment”
Print this page