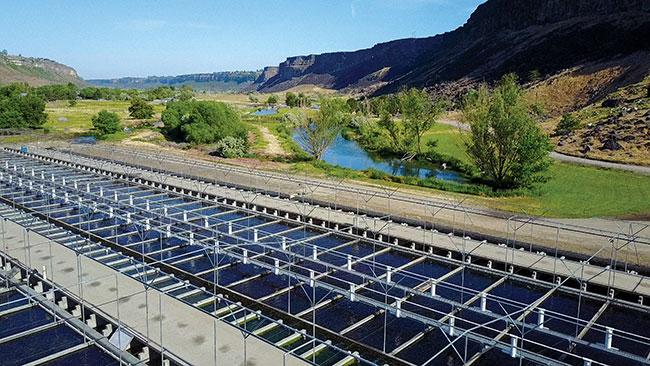 The flow-through raceways of Riverence located in the area of south-central Idaho known as Magic Valley Credit: Riverence

David E. Kelley, the writer-producer known for such TV shows as Chicago Hope and Ally McBeal, once said that, when he was creating Boston Legal, he felt a certain compulsion to be more vocal about issues.

The future of wild salmon is one of them.

Kelley, a lifelong fisherman born in Waterville, Maine, chose Nimmo Bay, British Columbia, as the setting for an episode of Boston Legal and built the threats to wild salmon into the storyline. He began exploring how land-based aquaculture can relieve the pressure on wild harvests—and now has become the second largest trout producer in the US.

Kelley has emerged as a conservation-minded businessman who puts attitudes (and assets) into action.

In 2014, as the Spring Salmon Group, he bought a Washington State hatchery, Aquaseed, and renamed it Riverence. Two years later, he added seven Idaho locations, which became known as Evaqua Farms. His company, which also recently purchased a processing plant from the leader in the sector, Clear Springs, can trace its products from broodstock to egg to retail through a proprietary cloud-based system, Origin AquaTech.

These ventures grew out of Kelley’s collaboration with Robert Young, a fourth-generation cattle rancher. “Land-based aquaculture was proving its potential as one of the healthiest, most efficient, and environmentally sensitive protein production models on the planet,” the company says. “However, they discovered that aquaculture was trailing [livestock agriculture] on breeding values, applied nutrition, technology, animal husbandry practices, and distribution methods.”

The company has since hired aquaculture veterans, as well as sustainability specialists, technology practitioners and a branding expert, totalling approximately 175 employees. After a recent three-day quarterly review meeting, Gabe Watkins, director of communications, told Aquaculture North America (ANA) that the entire operation will be rebranded Riverence.

Although Kelley is not involved day-to-day, it is hard to doubt the commitment of this Princeton grad and former attorney. His name appears on rosters of aquaculture innovation workshops, and Riverence donates money to conservation funds—and chef-prepared steelhead trout samples to film fundraisers.

Kelley has talked about his aquaculture business to Neely Swanson, a former colleague and blogger. As reported in “Fish Story,” Kelley told her the goal was to be environmental stewards and make a profit while doing so. Thinking about the people around him, he added that the subject can get boring. “I see eyes glass over when I start to talk about it. Michelle [Pfeiffer, his wife] elbows me in the ribs…and I shut up.”