Aquaculture Canada concluded on a high note on Wednesday with clear signals the aquaculture industry is robust and is on course for continued growth, but it also highlighted the areas of concern that continue to dog the industry. 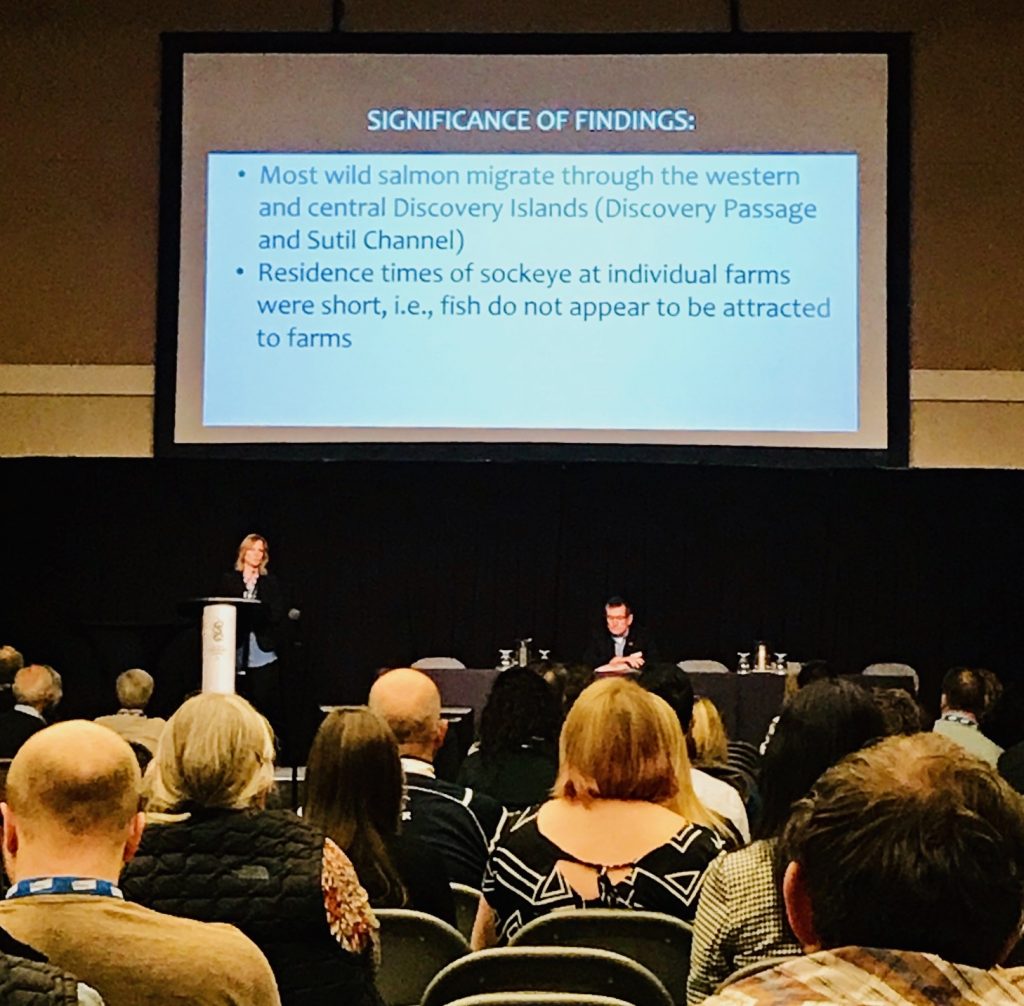 Delegates at Aquaculture Canada listen to results of a scientific research. Such messages need to reach a broader audience to help dispel misconceptions about the industry

Roughly 350 delegates–30 percent more than last year’s– attended the four-day event held in picturesque Victoria, BC. The event’s theme, “Partnering for a Sustainable Tomorrow,” provided the unifying thread among the representatives from industry, academia, governments and communities and served as foundation for key messages.

Keynote speaker Kimberley Thompson, director of Seafood for the Future at the Aquarium of the Pacific in Long Beach, California, called on the industry stakeholders to be “hands on deck” in rejecting popular yet misguided narratives about aquaculture by sharing accurate, science-based information more consistently and by owning up to past mistakes.

“More collectively and broadly, we have to acknowledge aquaculture is a great tool and it can do great things but it has done bad things in the past. We got to be honest about the fact that mistakes happen and if an event happens, own up to it — ‘this happened and it sucks but here’s what we’re doing to move forward,’” Thompson said.

She emphasized the need for cross-sector collaboration if the industry is to dispel misconceptions driven by a small group of educated and affluent “concerned citizens and environmental groups” yet who are so influential that they sway policies, she said.

“There’s room for everyone at the table,” she emphasized. “I can’t say this enough: if we’re not all working on this together we may as well maybe not do it at all. I don’t want it to be that doom and gloom because there’s still things we can do but we really do need to be working together and be more transparent with each other as well as with our intended publics.”

Conference sessions showcased the progress in addressing headline-grabbing concerns such as sea lice and farmed-and-wild-salmon interactions, but it is a challenge when it comes to communicating the value of scientific research to the broader community, said Dr Simon Jones, who is this year’s AAC Research Award of Excellence honoree.

“We’re good at discussing our work with each other but perhaps one of the ways that science and research can actively contribute to the decisions that are made concerning the growth of the industry is to find ways to communicate science to a much broader audience, the broader public that quite frankly needs to be convinced that it’s not all about sea lice, it’s not about viruses from Norwegian salmon that are somehow present in BC killing wild salmon,” Jones said.

“It would be through that level of communication that we can best serve our managers and decision-makers and more fully extract the value of the investment that we make in the scientific process,” he said.

In welcoming conference delegates to Victoria on behalf of the First Nations, advocate for First Nations and coastal communities Dallas Smith acknowledged that “aquaculture has been a loaded word for a number of years” in BC, the country’s largest producer of farmed salmon.

Smith noted that aquaculture in BC has “turned the page” with the groundbreaking memorandum of understanding signed last year between the federal government, First Nations government and provincial governments that address First Nations’ long-standing concerns.

“We’ve seen economics be the only driver on how decisions are made when it comes to resource development and management, and I’m proud to come from a province where we’ve managed to change that balance now,” he said. “We need those proteins to come with small environmental footprint and I’m really pleased to support this industry that’s providing them.”

“I just get a sense of enthusiasm and excitement for the industry now,” commented Joanne Liutkus, president of the Aquaculture Association of Canada (AAC), which organized the event. “The aquaculture industry is working towards ways of building partnerships and educating the public more and we’re really open to that. So it’s just very positive outlook.”

“We’re really happy with how everything’s gone and feel that it’s a big success,” she added, summing up the conference experience.

Aside from the growth in delegate numbers, Liutkus also noted the growth in participation from overseas exhibitors. There were companies from Norway and Scotland among the 39 exhibitors, she said. “There are new, smaller suppliers, companies from different areas of the industry coming through that you wouldn’t have seen in the past, such as feed ingredient suppliers, for example, and new technologies. Another thing to note with the trade show is that there were more international booths.”

“We’re really happy with how everything has gone and feel that it’s a big success,” she concluded.

Next year’s edition of Aquaculture Canada will be held jointly with WAS North America in St John’s, Newfoundland and Labrador, from 30 August to 2 September.