But biological issues remain a grim reality for salmon farmers 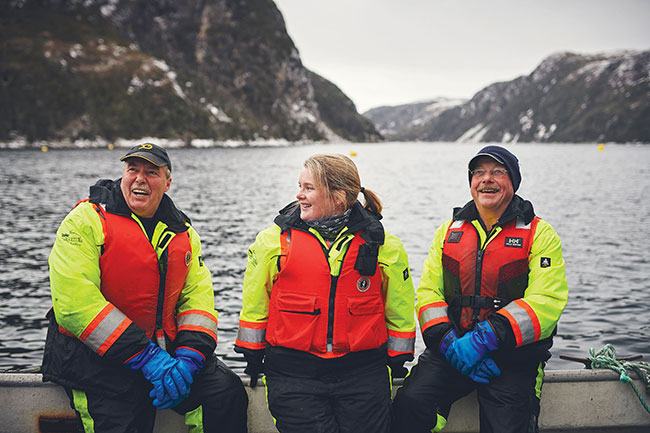 Survey conducted during the pandemic shows 71 percent of Newfoundlanders and Labradorians fully support seafood farming, up from 56 percent in the 2017 survey ALL PHOTOS: Newfoundland Aquaculture Industry Association

Enthusiasm for Newfoundland and Labrador’s aquaculture industry appears unstoppable as latest insights show community support is on the uptick and the salmon sector is on a better footing to recapture growth.

Public research conducted during the pandemic shows 71 percent of Newfoundlanders and Labradorians fully support seafood farming, up from 56 percent in the 2017 survey by pollster MQO Research. The latest poll also shows opposition to aquaculture has diminished, with just 6 percent against it, down from 14 percent in 2017.

Executive director of the Newfoundland Aquaculture Industry Association (NAIA), Mark Lane, says the realization that aquaculture provides a “heightened level of food security,” such as seen in this pandemic, has mobilized community support.  “We’ve seen what happens when you don’t get to transport food and goods into the province,” he says.

Lane recently stepped down as executive director in NAIA.

The provincial government recognizes the industry’s role in the economic recovery of the debt-ridden province. A highly anticipated report released in May offered a six-year plan to revitalize the economy, including the need to streamline the regulatory decision-making processes for aquaculture licences and site approvals to facilitate industry growth.

“Aquaculture can provide employment to help sustain rural communities. The province needs a responsive regulatory regime that protects the environment while allowing the industry to grow. Marketing and communication efforts are required to help Newfoundlanders and Labradorians understand the economic benefits of the industry,” says “The Big Reset” report.

And if the rise in NAIA’s membership numbers is any indication, industry players are also keen to grow the industry and benefit from its growth. In the last year, since the covid pandemic’s onset, NAIA added 30 international service suppliers to its membership, bringing the total to roughly 150 members. This represents a 300-percent growth in six years, says Lane.

Government data shows overall salmon yield went down 6 percent to 14,167 tonnes in 2019 from the previous year as a result of “temperature events” that killed 2.6 million or roughly 5,000 MT of salmon at Mowi Canada East.

In 2020, overall production further contracted, by roughly 45 percent, to 7,802 MT. The decline did not come as a surprise to Mowi nor to the industry regulator, the Ministry of Fisheries and Land Resources.

“Anytime you have a major issue in salmon farming like the company had in 2019, it takes years for those sorts of repercussions to kind of roll through the system,” Mowi Canada East managing director Alan Cook told this publication in an interview this past summer. “We had pretty limited production out of Eastern Canada last year.”

Incidents involving infectious salmon anaemia (ISA) have landed the salmon producers in the headlines over the past several months. The finfish disease, detected initially in the mid-90s in Atlantic Canada, has caused significant economic losses for them as they have had to harvest salmon prematurely or cull entire cohorts of salmon when the virus is detected.

Parent company Mowi ASA reported losses of $17.7 million (€15 million) in the second quarter of 2021 as a result of early harvests of ISA-diseased salmon at its Newfoundland unit.  This past summer, Grieg NL reported suffering “minor financial impact” from the culling of a million fish after one of them was found to have the virus.

Environmental challenges due to sudden low dissolved oxygen levels at a Mowi farm site on the province’s south coast killed more than 92,000 salmon in September.

Though the science and the technology around salmon farming is much improved and farmers are more environmental-impact focused, those dark clouds threaten to impede progress.

Mowi COO for Farming Americas, Fernando Villarroel, whose areas of responsibility include Chile, Atlantic Canada and Western Canada, says improving the biological performance of the company’s operations in Newfoundland, in particular ISA and sea lice management, are a top priority.

Last summer, Mowi Canada East for the first time put into operation a full range of sea lice control systems. It also restructured, cut the fat in the organization, and is keeping a keen eye on costs.

“Newfoundland, is one of the few farming regions with significant potential for growth, and Mowi has the fundamentals in place to capture such potential,” says Villaroel, adding that goal is to reach a stable production of 25,000 tons per year.

According to Cook, another goal is to expand Mowi’s presence in the province with the addition of two new farms in 2022, and one each in 2023 and 2024.

Other farmers, also attracted to the province’s proximity to eastern Canada and the northeastern United States markets, do not want to be left behind.

A number of them have responded to the Department of Fisheries’ October 2020 call for Expression of Interest (EOI) in establishing marine salmon farming operations in the south coast of the province. The Fisheries Department identified the “Bays West” area as having the potential for commercial development, which could add approximately 15,000 to 20,000 MT to Newfoundland’s annual production of Atlantic salmon, it says.

A department spokesperson in September told this publication that applicants meeting the assessment criteria for the EOI have been invited to participate in the second phase of the procurement process. “The final proponent will be selected in late 2021” after proposals submitted in phase three are assessed, said the spokesperson.

As the industry further develops and expands salmonid operations, the province anticipates that salmonid production will exceed 50,000 MT – more than six times current volumes – by 2030, and provide an even bigger economic boost by contributing as much as $600 million to the province’s coffers and creating 7,000 additional jobs.