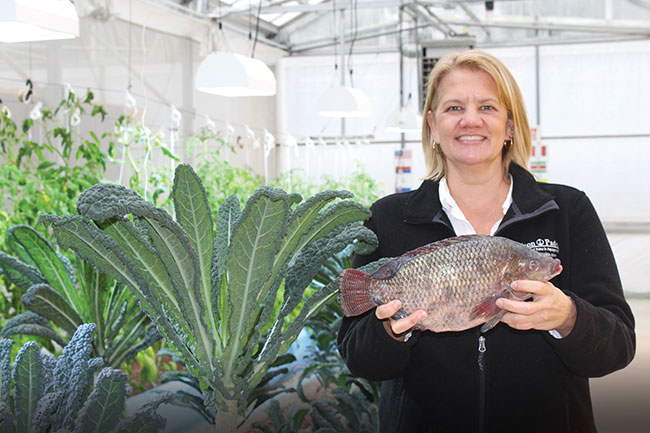 Aquaponics grower B.J. Davis misses the “thumbs-up” he would get from sous-chefs when he delivered greens to restaurants at posh spas in Sedona, Arizona. Absent, too, are the school kids on farm tours who grow wide-eyed when they realize how much science and math they need if they want to to become aquaponics farmers, too.

But while COVID-19 has temporarily robbed Davis of these pleasures, the co-owner of The Fish’s Garden in Camp Verde, Arizona, is instead using this period to scale his operation with a new greenhouse — and double lettuce production without adding any more fish.

This enthusiastic architect-turned-farmer is among a growing legion who are embracing aquaponics at a time when there is a refinement of technology to make it more efficient. Both academic institutions and industry are probing a range of elements, including artificial lighting and water quality, with an eye toward saving energy and labor.

“There’s a lot happening now,” says Dr Ron Malone, an environmental engineer and educator who holds a number of patents on floating bead filters. “Before there were more spiritual, I-want-to-be-in-harmony-with-nature type of growers. In the developing world, aquaponics was a practical supplement for food. Now we’re getting a whole different group of people coming in and trying to make it more efficient.”

That includes both growers and scientists. In fact, Brandon Yep, a researcher at the University of Guelph, found that in the past three years, over 160 scientific articles have been published on aquaponic technology, detailing numerous trends and technological advancements.

From the Netherlands, Germany, Italy, Switzerland, and Iceland, researchers are building on early work done in the US and particularly that of the pioneering Dr James Rakocy of University of the Virgin Islands (UVI), who developed the first commercial coupled aquaponic system and began offering workshops in 1999. The program has hosted students from more than 50 countries. One of those was B.J. Davis.

Currently, the largest segment is commercial production. Those farmers, however, might not be who you think. Aquaponics expert Rebecca Nelson, who co-founded Nelson and Pade in 1985, says, “Going back 20 years, I thought our market would be fish farmers who want to be more profitable, diverse, and sustainable. Or hydroponics farmers that want the same things, and so they would add fish. But that isn’t at all how the industry evolved. The people moving forward in the aquaponics industry are those interested in having a business and doing some kind of farming that’s fully sustainable.”

Her customers with small- and medium-sized commercial operations, who earn a good living from them, include former architects, engineers, teachers, and medical professionals, people who “planned it correctly and then executed with a science-based system and good management and marketing.”

“It’s really the Holy Grail for someone looking for a green business,” she adds. 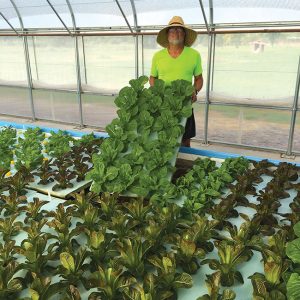 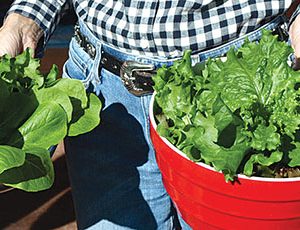 The Fish’s Garden lettuce is served at the restaurants of posh spas in Sedona, Arizona 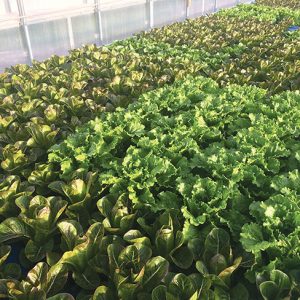 Trends
Aquaponics systems grow food in a way that addresses many sustainability issues, including limited water, environmental pollution, aversion to antibiotics and pesticides, and shrinking arable land, according to Yep.

His research cites a strong majority of commercial growers opt for tilapia and leafy vegetables, the preferred crop because they develop well in nitrogen-concentrated water, grow fast, and are in high demand.

“When you do the math,” says Nelson, “the leafy greens grow the fastest and will have the best return.” The labor and footprint required for crops must also be factored into the profitability equation, which is why tomatoes and strawberries are lower on the list.

But leafy greens is a broad category. Davis has experimented with over 50 varieties of lettuce. His arugula is in high demand and, when he expands, he will add to his core raft systems some media beds for other crops like micro-greens “which are really big around here for restaurants.” He listens to his customers, for whom he also grows custom crops on request.

The fish in his system are a hardy crop of bluegills, which he sells to bass farms as a feeder population. But the greens are the money-makers.

Owned by Davis and his wife Cat, who was an electrical engineer, The Fish’s Garden is also on the cusp of the trend to improve operational efficiency. When they initially contemplated a move from their hometown of Toronto to Arizona to start an aquaponics business, their first step was to scrutinize a pro forma “to demonstrate that we could make money as a couple.” Now, after six years of harvests, they are moving to all LED lighting and doubling their solar energy to further reduce their utility bills.

System components and design
For any system to succeed, uneaten feed and fish waste must be removed quickly or water quality will degrade. Growers juggle considerations of effectiveness, expense, and maintenance in choosing the solids and bio filters to do that work.

Now filters have been developed that can serve both functions. The ease of backwashing and maintenance have also been improved.

Another decision is the pumps to move water among system components. They include both electrically run impeller (submersible and inline) and airlift designs. To conserve energy, there have also been advances in airlift technology, according to D. Allen Pattillo, an aquaculture specialist at Auburn University.

Dr. Malone, who is also the president of AST Filters, says his company’s preference is to design systems with airlift operations. Otherwise, with pumps, there is a great energy cost. “You’re killing several ancient trees in the form of oil to produce a couple heads of lettuce. We can’t sustain that.”

He also favors decoupled systems, a trend that Yep notes is “becoming increasingly popular.” Unlike the classic closed system with water flowing in one continuous loop (exemplified by Racozy’s design) this newer approach utilizes sub-loops designed for superior filtration, isolation of disease, and adjustability of nutrients, water temperature and pH. Plants and fish each get what is optimal.

“You can carry 20 to 30 percent more trays with a decoupled system,” Malone adds. “Essentially, you can get more out of your feed and, at the same time, lessen your environmental impacts by digesting the sludge internally and decoupling the system.”

He appears optimistic, especially as he speaks about the future impact of students who are learning about aquaponics now. “It’s hard to say where aquaponics might be in another 10 years,” he adds.