Two projects focused on increasing food security in remote communities in Canada are gaining traction. One of them is a collaborative project between the Moose Cree First Nation and Canadian Aquaculture Systems Inc. 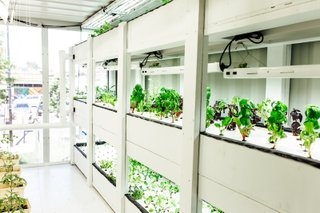 A section of ÉAU’s vertical aquaponics farm in Montreal

In the two-and-a-half years since the Moose Cree First Nation in Northern Ontario received funding for a feasibility study in 2015, they have determined that an aquaponics operation would be the most effective option.

“We’re now at the detail and design phase – educating the community about aquaculture and aquaponics, laying out the plan for the building, having drawings done, and basically moving the project forward,” says Moose Cree Director of Economic Development, Stan Kapashesit. “If all goes well, we’re hoping to put a shovel in the ground next building season.”

Collaboration with Canadian Aquaculture Systems has boosted the project. Company president Daniel Stechey says the project will not only benefit the local community through increased food security, but will provide opportunities by incorporating educational elements to engage the youth.

“It’s not just First Nations or remote communities,” says Stechey. “There are communities all over the world where food security is an issue and they’d like to have more control over what they produce.”

The next key challenge, he says, is to get it right so that the project can be replicated in other communities.

In Quebec, a similar effort is underway. A company called Écosystèmes Alimentaires Urbains (ÉAU) developed the first vertical aquaponics farm in Montreal. When that urban farm began attracting the attention of local communities, the company shifted its focus from urban farming to working with communities to build projects around their needs.

“For a project to have a clear impact on food security, on socio-political issues and empowerment, it has to be tailored to a community,” says ÉAU co-founder and CEO Olivier Demers-Dubé.

ÉAU is currently working on 10 projects in the province in partnership with various aboriginal communities, food cooperatives, non-profits and businesses. Demers-Dubé believes aquaponics will become a key food production method and that the projects ÉAU helps establish will inspire the development of similar ones.

“At the rate the world’s population is growing, 1.3 billion people will need food by 2050 and the livestock that we produce right now will not be enough, for obvious reasons,” says Demers-Dubé. “Aquaponics is not necessarily the only answer, but it will make a difference.”