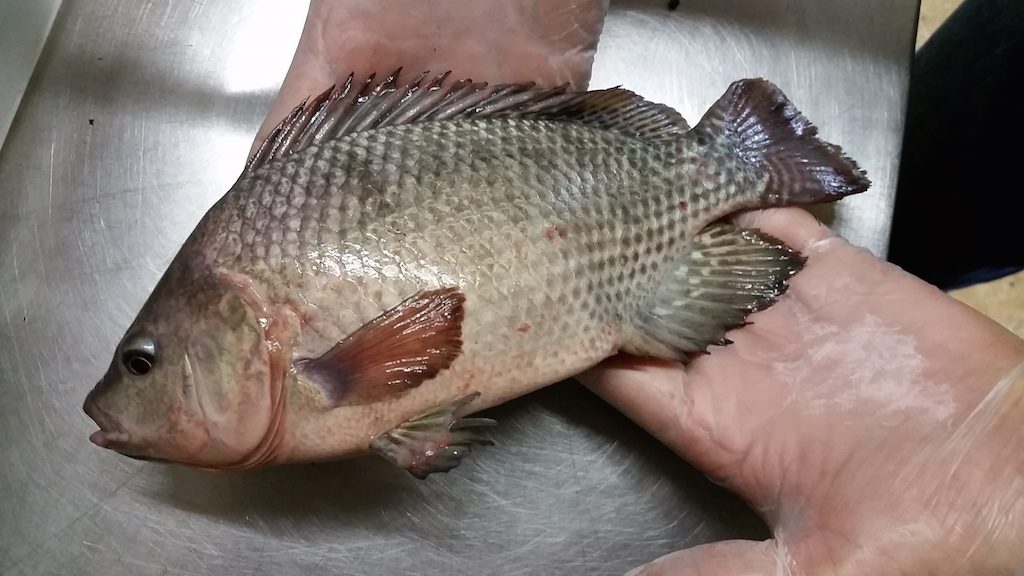 Toronto’s first and only commercial aquaponics operation is poised for major leaps forward.

Aqua Greens, founded in 2014, produces organic basil, chives, arugula and lettuce, and organic tilapia. It currently sells 12,000 plants and 500 fish a month to upscale downtown restaurants and resorts north of the city. With organic certification almost complete, the company will very soon be sealing more lucrative and long-term deals with a large international restaurant chain (which already purchases greens) and at least one large natural food retailer.

Tilapia are usually sold at 1.5 kg, but the restaurant wants smaller fish from Aqua Greens

— about 350g — that will fit on a plate. “It’s certainly a quicker turnaround,” notes co-owner Craig Petten. “We may be able to get them ready in less than two months. We’re not sure yet.”  At harvest, the fish are picked up by another company which keeps them in holding tanks for four days, during which all waste leaves the body and the flesh firms up. The fish then go to market. “Having certified organic fish will mean tens of thousands of extra dollars in gross income every year,” Petten says.

Considering all the hydroponic vegetable and the aquaculture production aspects of their entire system, Petten and co-owner Pablo Alvarez say the fish have been the most simple. “They eat and poop, they’re doing great, no problem with disease,” says Petten. “We monitor the effluent water quality, taking out the solids and ammonia, adding iron, potassium and calcium. Of course, we have to adjust as they grow to maintain the amounts of the various nutrients.” They have two tanks, one with smaller fish and one with mature fish, with all fingerlings supplied by Sandplains Aquaculture.

Petten and Pablo Alvarez started the aquaponics venture after spending 30 years in the restaurant business. A few years ago, they both enrolled in a three-year Sustainable Energy Building Technology program at Toronto’s Humber College and decided to learn more about aquaponics. After graduation, the pair studied facilities in three US cities, took more courses and worked at a facility.

For their own aquaponics operation, they settled on design created by faculty at the University of Virgin Islands, but had it stacked in four storeys. They continue to be mentored by a firm called Aquagrowers. “We had a preliminary LED lighting setup for the greens with Philips and it worked fantastic, but it was just too costly for us at that point,” says Petten, “so we went sodium lights from PL Lighting in Beamsville. The sodium are great for non-flowering greens. But we’ll be using LED in the scale-up.”

A major Aqua Greens expansion is in the works – but organic certification is first. Petten says it’s been a bit of a challenge to achieve it because a certification for both aquaculture and greenhouse production is fairly new. Aqua Greens has already achieved Oceanwide certification in 2015 (obtained through the Vancouver Aquarium), which relates to standards for fish health and sustainable production. Dr Nick Savidov believes aquaponics to be extremely sustainable, stating publically that it’s “the only food production system in the world that provides only food and no waste.”  Savidov, Senior Research Scientist at the Aquaculture Centre of Excellence at Lethbridge College in Alberta, has been studying aquaponics for years and has developed affordable and efficient high-yield methods for the Canadian environment, methods that have been called the best in the world. He is an advisor for Aqua Greens.

Alveraz and Petten are the proud winners of a 2015 Ontario Premier’s Award for Agri-Food Innovation Excellence, a prize that includes lots of media exposure and $5,000 in cash.