Aquaponics: The future or a niche? 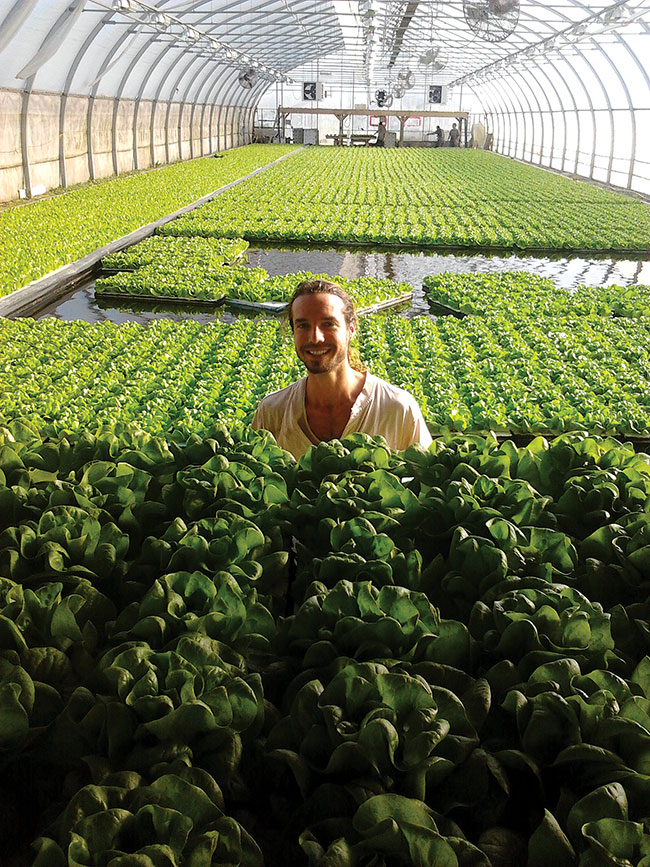 Is aquaponics going to be the new frontier for food production, or is it just a fad that will settle into a niche?

“I feel this is a budding industry,” says Mark Warrell, production manager at Nevada’s Dayton Valley Aquaponics. “Market feasibility studies show very strong growth in the aquaponics sector. The commercial sector in aquaponics is a feasible business model and shows promise to feed the future.”

Warrell’s colleague, business manager Trevor Birba says loss of fertile land because of climate change and the growing popularity of land-based aquaculture are “creating tailwinds” for this growing sector.

Rebecca Nelson, co-founder of Nelson and Pade, one of the largest aquaponics supply and training companies in North America, says she sees an increase every year not just in the number of farms, but in the size of those farms. And people from all walks of life are jumping in.

“Our customers range from doctors and architects to school teachers and veterinarians,” says Nelson. “Pretty much every career field you can think of.”

From a sustainability perspective, aquaponics is certainly attractive to many. But how long will those operations last? Wilson Lennard, an Australia-based consultant who has clients in North America and Europe, feels the industry is in a “shakedown period,” where the wheat is being separated from the chaff.

Lennard believes that outside of niche markets and large-scale operations, aquaponics is best utilized in areas with poor soil or water quality.

Richard C. Shultz, a faculty member at Santa Fe Community College in New Mexico, agrees. Shultz ran an aquaponics business in Texas and worked on aquaponics commercialization in Canada. He said the jury is still out on the economic viability of aquaponics in temperate climates. He also feels that those best positioned to succeed in aquaponics are those with fish-farming background.

The Dahlia Campus Greenhouse aquaponics farm has been credited for transforming a Denver neighbourhood from a food dessert to a food oasis Credit: Mental Health Center of Denver

Superior Fresh president Brandon Gottsacker (at right) and staff at the company’s Wisconsin facility. An expansion that will see greenhouse space increase from six to 14 acres and salmon production increase from 200,000 lbs to 1.5 million is underway Credit: Superior Fresh

Why some fail
“People just jumping into aquaponics because it is trendy, deciding that they’re going to do a large volume of fish and plants without a lot of experience, I don’t really see successes coming from those,” says Shultz.

This is where hands-on training and long-term grower support becomes crucial, says Nelson.

“We lend them our 30 years of experience,” she says. “And our systems come with standard operating procedures and manuals. They have all the tools they need to succeed in operating the system.”

JD Sawyer, founder of Colorado Aquaponics and The Aquaponics Source, acknowledges there have been many “flops,” but says there are lessons to be learned from those failures. Many companies have been hobbled by poor system design, such as not utilizing space efficiently or effectively. But the other major issue, similar to all aquaculture, is a lack of good business planning and marketing strategy.

“If you’re going into this for business or to replace your day job, you’ve got to have a plan and you need to know where you’re selling this food, have markets identified and customers identified,” says Sawyer.

Jonathan Van Senten, an assistant professor with the Virginia Tech Department of Agricultural and Applied Economics, agrees about the importance of marketing.

“If you’re very small scale but you have a niche market that you can sell a very high quality product to, you can be profitable,” says Van Senten. “But it’s hard to compete with things that are commodities. Lettuce, for example, it’s very hard to compete with that on price. That’s really where you need to have these very large facilities that can get those economies of scale.”

Dr Steven Summerfelt, chief science officer for Superior Fresh, one of the larger aquaponics companies in the US, says a big part of their success has been front-loading their operation with subject-matter experts. Most of the smaller, owner-operated facilities are unable, or cannot afford, to do so.

“Aquaponics, especially for Atlantic salmon, is quite complex in order to maintain the ideal water quality for the performance of both salmon and leafy greens or even fruiting vegetables,” says Summerfelt. “They’re not at a scale that makes it possible to get a lot of production efficiencies or even to afford the experts that understand the horticulture, water chemistry, food safety, sales and marketing.”

The future or fad?
The experts we spoke with were conflicted as to the future of aquaponics. Some, like Sawyer, say the sector has tremendous growth potential.

“It’s still arguably in its infancy, but there was virtually nothing going on 10 years ago other than a few small operations,” says Sawyer. “Aquaponics is definitely here to stay, it’s a critical part of the food solution that we need for our planet.”

Others are more measured in their assessment. Lennard thinks aquaponics will always be a niche sector. Hydroponics and RAS, he notes, are very popular topics currently, but are still a tiny fraction of overall production.

“I think aquaponics will be the same,” says Lennard. “It will find its niche and that’ll be based more on where it can be done, where it’s economically viable.”

Lennard does see one circumstance in which aquaponics could become a driving force to feed the future. “Maybe it’s a hundred years into the future, when we’ve destroyed the planet and we all have to live inside greenhouses.”