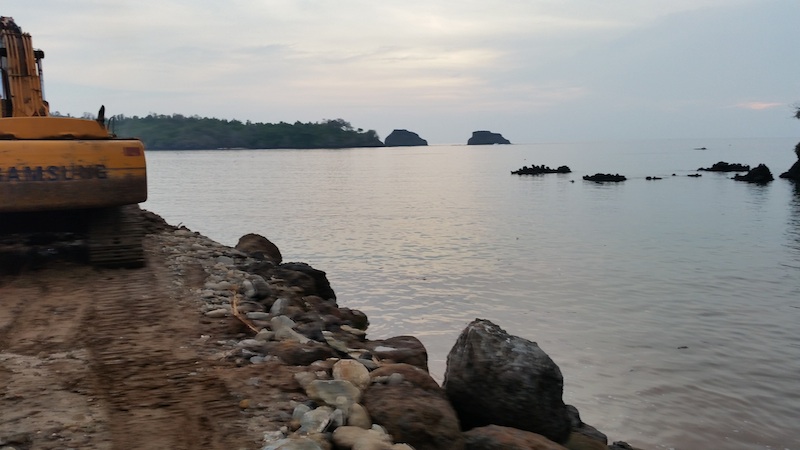 “I don’t want to say it’s revolutionary,” says Aquasense International Corporation CEO James F. Reilly. “But it is evolutionary. We have a very unique product.”

Reilly is referring to the tilapia raised in Aquasense’s open-ocean farm in the Gulf of Panama. Aquasense is currently in the process of commercializing its hatchery – expanding its broodstock pond and its raceways to hold an increased number of fry. After that, the company expects to start stocking their cages by end of summer.

Aquasense began work as an aquaculture entity in 2003 in the Bahamas with a deepwater cobia farming operation in coordination with the local Cape Eleuthera Institute and the University of Miami.

“We were mildly successful,” says Reilly. “We were successful in proof of concept and in growing cobia. I think after a cost-benefit analysis we didn’t feel the return on investment was going to be where we would want it to be in five to seven years. It was more of a species thing. Even though they’re a fast growing fish, it wasn’t a very resilient fish. There was quite a bit of scientific management, specialized feeds, you needed a team of scuba divers constantly netting and managing this contraption. So we left that site.”

In 2007, Aquasense moved operations to Panama – the Panamanian government is very open to this type of industry, says Reilly, with easier access to permitting. Within three years they settled specifically on Isla San Jose, a private island which provided great water, infrastructure and easy logistics in getting to the island from the mainland. For the species, this time they chose tilapia.

“It’s a great fish, very resilient, disease resistant,” says Reilly. “We could have just done it in lakes, but we’ve already learned how to grow fish in the open ocean. The whole salt water process, we felt, really changed the taste of the fish versus the same fish grown in brackish water. We were convinced we had something here.”

Beyond the taste – which some consumers at tasting events compared to red snapper – the open ocean process has another benefit – water clarity. In the open ocean by Isla San Jose, Reilly says, the water is clean and free of contaminants.

“We’re in this huge body of water that’s constantly moving and constantly flushing out contaminants,” says Reilly. “We get great currents, we’re on the pacific side of Panama so we have four to five meter tidal changes. We have nutrients coming to our cages – these fish are omnivorous, anything that gets on the cages, they’re eating. They’re constantly in an environment full of nutrition. You can’t get that in an estuary. A lake, maybe, but you’d have to aerate it.”

Another key aspect of Aquasense’s product, says Reilly, is their specialized feed. Research showed that the fish had more omega 6 than omega 3 by more than a two to one ratio, which was cause for concern about the health of the fish. Reilly says Aquasense worked with Skretting to develop a new feed which would boost omega 3 levels.

“We stripped out all the soy, all the corn and we replaced it with flaxseed and walnut oil,” says Reilly. “We don’t have conclusive evidence yet, but we know based on our preliminary research we can tip the scale. We’re not going to get them to an omega 3 level that’s equal to salmon or tuna, but we want to make it a more nutritious fish.”

Reilly is also very proud of the efficiency of the operation. Aquasense is using technology to automate their processes as much as possible, including automatic feeders, underwater cameras on site and even using a video adapted drone to survey the site. These efforts pay dividends for the fish and the company itself.

“Our goal is to change the status quo,” says Reilly. “We want to have fewer hands on the fish because any stress that you add to the environment is going to change the growth of that fish. The more human interaction with that fish, the more problems you’re going to have. I’m not going to say we’re never going to have a diver in the net or around the cage but we want to have fewer.  Better to have eyes in the sky and under the water. It’s not expensive! With all the wireless and satellite technology, that makes everything a lot cheaper and that makes my investors happy.”