AUBURN, Ala. - For months now, an Auburn University research team has been keeping close tabs on roughly 250 tagged paddlefish and smallmouth buffalo in the Alabama River in an effort to learn more about how lock-and-dam systems on a waterway impact fish movement upstream and down. 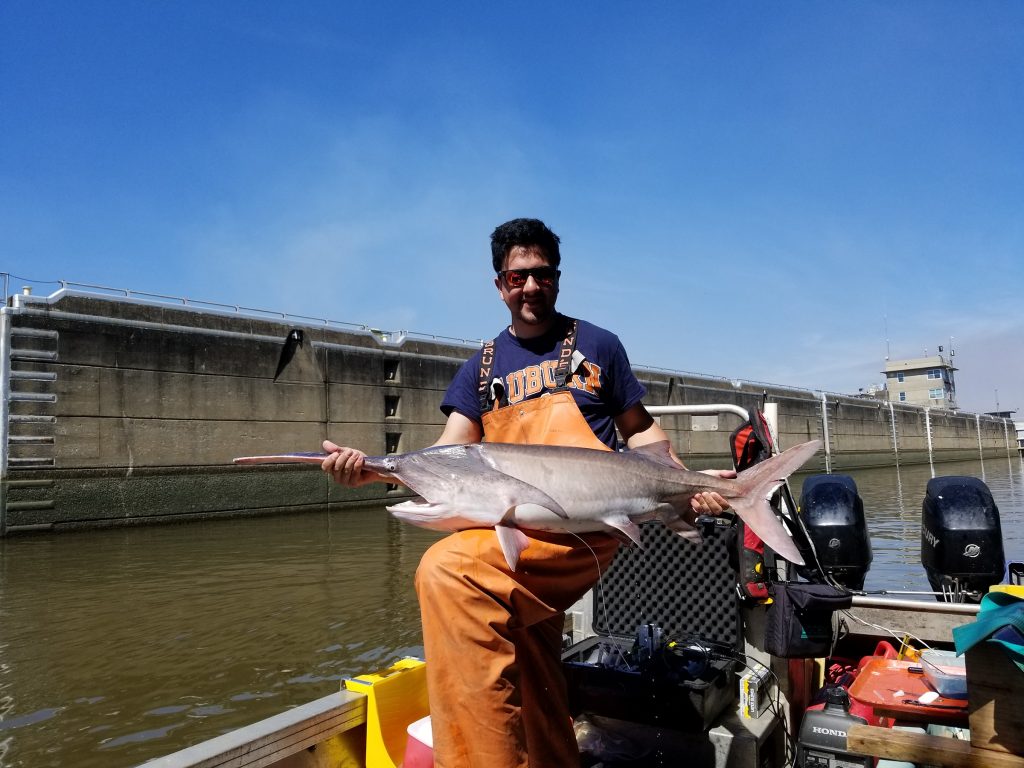 Auburn fisheries graduate student Henry Hershey holds a paddlefish he and his fellow students will tag and release back into the Alabama River near the Claiborne Lock and Dam. A research team is studying how lock-and-dam systems on a waterway impact fish movement upstream and down.

In the study, led by School of Fisheries, Aquaculture and Aquatic Sciences faculty Dennis DeVries and Russell Wright, they and a cadre of graduate students have tagged each fish with a tiny transmitter that “pings” the fish’s location every 3 seconds. If the fish is in range of an array of receivers the team has placed around three Alabama River lock-and-dam systems—Claiborne, Millers Ferry and Jones Bluff— the pings are registered, and the fish’s location is recorded. As the tagged fish swim around the dams, the system generates thousands of data points that show where and how the fish move.

“That allows us to get a two-dimensional position on a relatively fine scale of where that fish actually is,” Wright said. “We can determine, as they approach the dam moving upstream, whether they choose a path through slower-moving water or whether they just come racing up and try to go over the spillway, regardless of water velocity. What is it about any particular area that they use that allows that fish to make it past the dam or not?”

“In a normal, uninterrupted river fish move freely upstream and downstream,” DeVries said. “”But if you build a dam, that blocks the passageway.”

Many fish species migrate upriver each spring to spawn, but dams can interfere with the spawning runs, causing the fish to either turn around, spawn at the dam or not spawn at all, DeVries said.

“The idea is to see if there’s a way to get those fish past that dam and move upriver,” he said.

The researchers’ current investigation stemmed from a smaller study they were involved with a few years ago in which the Nature Conservancy attempted to move fish past dams the same way boats manage passage: through lock systems. A lock system allows a vessel to enter a chamber where the water level can be raised or lowered to bring the boat to the top or bottom of the dam. The Nature Conservancy conducted “conservation lockages” daily in an effort to mitigate the effects of the dams on fish.

The theory was that fish would enter the chamber downstream and exit it above the dam, thereby bypassing the obstacle. It was virtually impossible, however, to determine if that technique was effective. That’s where DeVries and Wright entered the picture.

With funding from an internal Alabama Agricultural Experiment Station grant, they tagged fish with transmitters and started tracking the movement to discover whether fish were actually using the lockages. Their findings? Among the three dams, fish moved up- and downstream at Claiborne Lock and Dam only, and most of that movement was not through the lock system, but by going over a crested spillway at the dam.

During high flooding, water levels are high enough that fish can sometimes make it over a crested spillway. The Millers Ferry and Jones Bluff dams, which registered no fish moving past them at all, are much higher and have only gated spillways, so that a navigational lock is the only way a fish could move upstream past these structures.

Their findings demonstrated the importance of tracking fishes’ actual movements instead of managing them based on assumptions, so DeVries and Wright expanded the project to investigate other questions related to fish movement and populations.

“We’re trying to see what they’re doing below the dam,” DeVries said. “There are areas that are shallower, deeper, higher flow, lower flow, and when we watch the movement of these fish, they’re not just going straight up the river.

“We want to figure out whether they are energetically optimizing their pathway up to the dam, and then, if they can’t make it up over the dam, conserving energy and testing the dam from time to time.”

Initial funding for the expanded study came from the U.S. Army Corps of Engineers in 2016, and the scientists have received additional funding each year since, for a total of close to $3 million.

The movement data from the tagged fish is giving the research team insight into how to potentially mitigate the dams’ negative impact. For example, the team has discovered that some fish are attracted to the still water in the lock chamber and are content to stay there, even when the water level rises above the dam.

“Are there things we can do to get them more efficiently into and out of the lock?” Wright said. “Possibly so.”

One option might be to install fish ladders to facilitate the natural migration of the fish over the spillway.

“If we can do things to the dam, the design of the dam, or the holding area that makes it easier for them to get past the dam, then at least at Claiborne, we can make a more efficient use of this crested spillway to move fish past the dam,” Wright said.

DeVries and Wright are focusing largely on paddlefish in the project because it is a highly migratory species, making it ideal for a dam passage study. Paddlefish also have economic value in that they produce large eggs that can replace the smaller sturgeon eggs used in caviar.

“One paddlefish can be worth thousands of dollars in terms of the value of the eggs,” Wright said, adding that the species also is a conservation concern.

Currently, six graduate students and a technician are involved in the project, performing electrofishing and gillnetting to collect fish, inserting the tags in fish, downloading data from the receivers, helping analyze that data and working in the lab with the fish and samples that have been collected.

“Our students are out there in a lot of really taxing, trying conditions,” said DeVries.

The team has tagged about 250 fish so far. Each tag costs $400 to $600. To perform the procedure, the students anesthetize a fish if necessary and make a small opening in the body cavity to insert the tag just inside.

“They then use sutures to close the opening, put veterinary-grade superglue on it, clean the incision, and then make sure the fish fully recovers and swims away,” DeVries said. “They’re to the point where they can do the procedure in under two minutes.”

The students also place the receivers, which cost a couple thousand dollars each, near the three dams. They have installed receivers in the lock chambers, above and below the dams and further downriver, using concrete parking bumpers to anchor them in place.

The receivers cycle through the different tag frequencies every 10-20 seconds, generating a data point every time they detect a tag ping. As a result, DeVries said the team has, “millions of data points,” to work with.

“Our work will yield evidence on what impact dams are having on fish ecology right now: Are they contributing to declining populations of some species, causing genetic shifts or providing population barriers?” Wright said. “Documenting a problem is important. That way, if you make a judgement call about things, such as flood control versus fish passage, you at least know if there is a reason to even have this argument.”