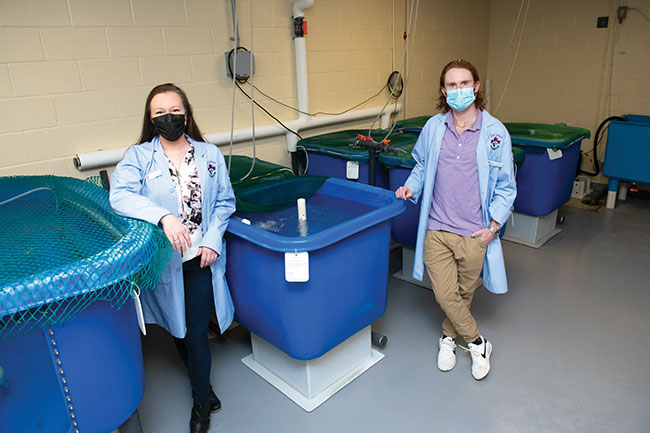 Raelyn McCurdy and Daniel Maguire, AVC Class of 2023, studied the impact of certain diets on the ability of Atlantic salmon to resist Y. ruckeri infection.

Through the VetSRA program, students conduct research projects under the guidance of a faculty member and present their findings to the University community.

Maguire looked at adding CpG oligodeoxynucleotides (CpG ODN) to fish food to see if it would stimulate an immune response to ERM. A group of Atlantic salmon was fed a commercial diet, and another group the same food coated with CpG ODN. After the fish were exposed to the bacterium, mortalities were recorded and clinical signs examined to determine if the supplement stimulated a response that would provide immunity. Maguire found that CPG ODN did not stimulate an effective immune response against Y. ruckeri, and that further research is needed regarding food additives.

McCurdy investigated the effects of Omega-3 and Omega-6 fatty acids and a microalgae supplement on the ability of Atlantic salmon to resist infection with Y. ruckeri. Fish were exposed to the bacterium and fed either a standard commercial feed, or one of three experimental diets containing microalgae supplements. One of the microalgal diets was enriched with Omega-3 fatty acids and the other with Omega-6. McCurdy found that feeding a diet high in Omega-6 fatty acids reduced the ability of fish to resist infection. The other experimental diets performed comparably to each other but did not yield significantly different results than the commercial diet. The results of this study are important in furthering understanding of how diet impacts the function of the immune system in fish.

Maguire and McCurdy intend to work in aquatic animal medicine upon graduation in 2023.

“Through VetSRA, I learned more about the essential role of research in aquaculture and veterinary medicine,” said McCurdy, who completed an MSc in aquaculture nutrition before attending AVC.