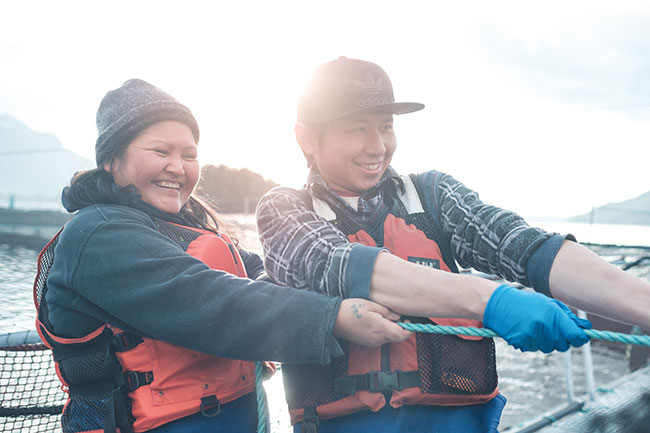 Like the net being pulled by these Cermaq Canada employees, the Deeper Dive website aims to get the public to learn more about the salmon farming industry Photo: Cermaq Canada

Misconceptions about salmon farming have hurt public perception of the industry. A digital campaign called Deeper Dive by the British Columbia Salmon Farmers Association hopes to change that.

Launched in October, Deeper Dive addresses 10 topics related to the sector that are often misunderstood by the public.

“We have used science and research to address concerns about the salmon farming sector for years,” says John Paul Fraser, executive director of the BC Salmon Farmers Association. “Until now, we did not have a public platform where everyone can view the collective research in a way that is easy to understand and shareable in social media.”

Task force’s findings
The platform’s roll out coincides with the release of findings by a task force that looked into the challenges of the farmed salmon industry, forestry and tourism in Campbell River, BC.

The coastal town accounts for almost one quarter of aquaculture employment in the province. Three of the world’s leading aquaculture companies – Mowi, Cermaq, and Grieg Seafood – have their North American head offices in town.

Lack of awareness and understanding of the role of salmon farming, as well as the “urban narratives and agendas of third parties” threaten the industry, said the Campbell River Business Recovery Task Force.

It found that members of the community and even their elected leaders are unaware just how important the three industries are to the local economy.

“I was surprised to see that, even in the case of Campbell River with its longstanding economic base in primary industries, the task force commented on a lack of recognition of the large positive impacts of related investment, jobs and business activity. Aquaculture people should be concerned,” commented Stewart Muir, head of the nonprofit Resource Works, an advocate for the responsible use of BC’s natural resources.

The task force referred to the three sectors as “first-dollar industries,” meaning the money they generate is spent and re-spent throughout the community through wages and local purchasing of good and services.

“There is a direct connection between the health of first-dollar industries to the number of schools, retail options, scope of health care, the number of parks, property values and general community amenities and attractiveness that are hallmarks of this community,” the task force said.

It believes it is the responsibility of the community and elected leaders to “understand what is at stake when any one of these sectors is threatened.”

“Threats come sometimes from market headwinds and lack of awareness but other times by impediments driven by urban narratives and agendas of third parties; either of which have little or no connection to this community, care for or have any understanding of it. There must be a balance between industry and social interests, something that is not evident today. We believe that all of the community’s political representatives need to understand this balance and vigorously defend it.”

It recommended that community members and elected leaders engage with the industries, be aware of their respective importance to the community at large; and be ready to defend them from “outside interests.”

The task force will re-convene by 1 March 2021 to track the progress of its various recommendations.