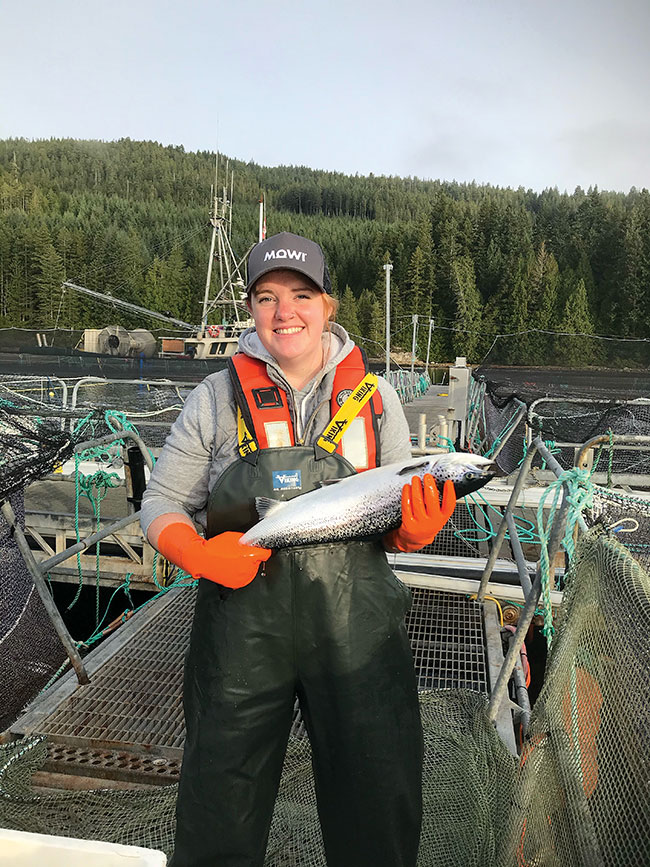 “I am a food production vet. It is my job to ensure these fish have a healthy life where I maintain their welfare and ensure they are advocated for. Then they go to feed people. It’s amazing. It’s good,” said Dr. Terra MacDonald, health manager and veterinarian, Mowi Canada West. “But after the culling of 925,000 fish, “I never felt such defeat. It had a serious impact on my mental health.” Photo: Terra MacDonald, mowi Canada west

By the time a federal judge reversed the government order to close 19 Discovery Islands salmon farms, jobs had already been lost, facilities shuttered, and fish killed. Yet a professionalism marked the reaction to the April decision – despite the ups and downs, loss and uncertainty that aquaculture companies, their teams, and local communities had suffered for over a year.

“I was glad to see the recognition of the importance of procedural fairness,” said Dr. Terra MacDonald of Mowi Canada West, referring to the 66-page ruling by Justice Elizabeth Heneghan. “Individuals in power should not be allowed to make one-sided decisions and claim there was a process, when that clearly was not the case.”

Some took sharper aim at activists. In a press release, Jim Parsons, president of the Northwest Aquaculture Alliance, interpreted the decision as a rejection of “the outrageous and unproven claims of anti-fish farming, fearmongering activist groups.”

In the background, though, many powerful emotions still linger. In December 2020, when then-minister Bernadette Jordan of Fisheries and Oceans Canada (DFO) announced that farming sites around the Discovery Island archipelago must be free of all fish by June 30, 2022, Mowi Canada West received notice just 15 minutes earlier, recalled Dean Dobrinsky, human resources and communications director at the time. “I was initially shocked, then angered, then highly motivated,” he added.

One haunting event occurred in February 2021, when the mandate left Mowi with no other route than to euthanize 925,000 salmon, which were about a year and a half old. Professionals at the Big Tree Hatchery first sedated them and then added a powdered anesthesia to the tank water.

Said MacDonald, the veterinarian overseeing the work, “I felt defeated. I felt angry. I was sad. I cycled through every possible emotion those three days. My focus there was to ensure that it was done as humanely as possible so that I can sleep at night.”

Veteran hatchery manager, Chris McNeill, was also there. “We’re farmers, so we’re used to culling events that are planned and purposeful. But this directive from the government barred us from following through to produce food for the general public.  It felt disappointing and frustrating,” he said.

“We bring in eggs and fertilize them. We raise them right from eggs. We take care of them all the way up,” he added, with a sense of both pride and pain.

In addition to Big Tree, McNeill also oversaw Mowi’s state-of-the-art Dalrymple hatchery near Sayward, which was “mothballed” in May, directly impacting the lives of about 20 people. But McNeill added a broader perspective: “That money is just gone. And that money is spent at grocery stores. It’s spent on sports teams. It’s spent social programs and all the fun things people like to do just enjoying life here. These people they’re laying off are gone.” 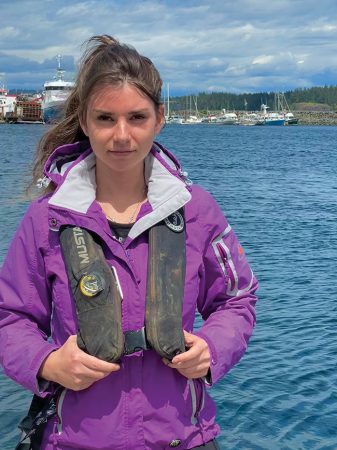 “A lot of people who taught me everything
I know about fish farming have either left or been laid off. It’s hard to see people close to retirement now trying to rethink the last five, six years of being employed,” said Kaitlin Guitard, lab manager at Mowi Canada West. “But I still believe at the end of the day that aquaculture is the future of sustainable protein production.”
Photo: Kaitlin Guitard

Debbie Willis, executive director of Campbell River Food Bank, agrees. In good times and bad, “all of the aquaculture companies support community endeavors,” she said. Mowi continues to contribute 600 pounds of frozen salmon filets each month to the food bank, but that quantity represents a cutback due to their curtailed operations, estimated at 30 percent of total production in B.C.

Mowi also permanently closed its four-year-old processing plant in Surrey, B.C., an employer of 80. The company decided to transfer primary processing of all salmon grown in B.C. to a Port Hardy plant and move value-added seafood processing to the U.S. Surrey Board of Trade head Anita Huberman pointed to the ripple effects on feed, milling, transportation, packaging, and warehousing businesses, emphasizing “We’re going to lose businesses. We’re going to lose jobs.”

Salmon farming in British Columbia has been “an economic lifeline” for the rural coastal Indigenous and non-Indigenous communities for more than three decades, according to the B.C. Salmon Farmers Association (BCSFA). A report calculated that the closure of the 19 farms could wipe out up to 1,500 jobs and $21.5 million in annual tax revenues.

All spring Mowi teams continued to dismantle sites in the Broughton Archipelago and Campbell River area. Feed pipes, electrical boxes, and stanchions were removed, along with items from the float houses. “I felt like I was taking apart years and years of people’s work,” said Kaitlin Guitard, who now has a new position as a lab manager.

Managing Director Diane Morrison came out to see the work of the “decommissioning” teams.

“She commended us for our efforts and keeping positive, but she didn’t say a whole lot,” said Guitard. “She looked out on the empty farms and was pretty quiet.  That’s what stood out to me.”