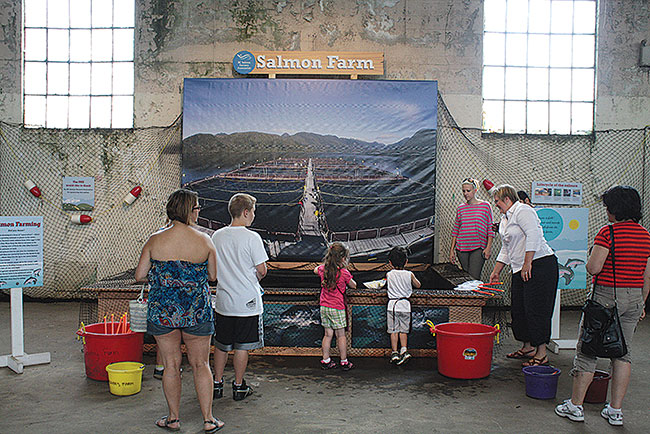 We can and must develop this sector that promises to grow incredibly healthy, sustainable food for Canada – and the planet’s – future, writes Timothy Kennedy, President & CEO of the Canadian Aquaculture Industry Alliance Credit: BCSFA

Canada’s governing Liberal Party announced during a federal election that it wants to see British Columbia’s salmon farming move to closed containment by 2025.

The commitment is terrible environmental, economic and social policy. It’s simply a call to shut down the industry. It’s bad environment policy because there is no science behind the decision, and today’s production, even with challenges such as sea lice management, is the most sustainable global animal protein. Further, governments choosing technology “winners” never have sufficient information to understand the unintended negative consequences of their decisions. Recent history is littered with good government intentions to choose environmental technologies that fail or create new problems. From an economic and social policy angle, should closed containment work, the remote and indigenous communities resurrected in Canada because of the sector will once again face steep decline as facilities move closer to major markets.

The Canadian seafood farming sector is young, vibrant and its seafood is among the most sustainable and healthiest in the world. We employ 26,000 Canadians, mostly in rural and remote communities where there are otherwise few job opportunities. In 2017, the sector generated a total of $7.7 billion in economic activity throughout the economy and $3.9 billion in GDP. Farmed seafood represents 36 percent of the value of all Canadian fish and seafood. But the opportunity is greater still.

Canada has the most bio-physical capacity for seafood farming in the world: nearly 80,000 kms of viable aquaculture ocean area is available. A comparison is Norway, which produces ten times the amount of farmed seafood, but has about one-third of the coastal capacity.

Readers recognize both the growing global demand for farmed product and the sustainability of the product. With an eye towards realizing Canada’s great opportunity, the work of our organization has been focused on advocating to our federal government for a federal departmental advocate for sustainable growth, a national sustainable growth target, a federal Aquaculture Act, and an integrated program for support.

These requests were closely aligned with the much-lauded recommendations of the government’s Economic Advisory Council, led by senior international business management advisor (and now Canada’s Ambassador to China) Dominic Barton. Barton identified aquaculture as a major area of economic opportunity for Canada. He indicated we could double in growth by 2028. Following this, the Agri-Food Economic Table, following Barton, repeated its praise of the sector and suggested ways that Canada could realize strong sustainable growth.

Much forward motion was brought to a brutal halt: in the final leg of the Canadian federal election, we now find the future of our marine production in the crosshairs of three political parties: the governing Liberal Party of Canada was the most recent to join the Green Party of Canada and the New Democratic Party in calling to move our innovative ocean-based farming in British Columbia to “closed containment systems by 2025.” Only the Conservative Party refrained from such a reckless and ill-founded platform commitment.

British Columbia is a well-known target for activists wanting to preserve the province from development. Canada’s energy sector is the most notorious target, but so is salmon farming: money flows across the border from large US foundations to fund activism against our sector. Joining them are an elite and well-connected group of Canadians who, convinced by protest science and wanting to preserve their fishing lodges, erroneously target the sustainable practices of our farmers as the reason for wild salmon decline.

Marine salmon farmers around the world are already moving towards the next generation system of extended life on land (i.e. “super smolts”) and less time in the ocean. Multi-stakeholder discussions, instituted by the Liberal government, were pointing clearly to this system as the realistic option in the near term and that full closed containment needed time to be proven out. Challenges such as land use, energy use, water use, waste removal, fish welfare and, most importantly, profitable operations, still need to be adequately addressed.

Canadian producers were on the cusp of major investments in hatcheries, technology improvements, and yes, considering marine closed containment pilot projects. Their intention was to continue to invest to constantly improve performance. Companies want to continue to invest in technology development in Canada, but here’s the catch: they can do this only if they have confidence in the support of governments for long-term investment. The party commitments requiring closed containment within a certain period of time break trust and seriously undermine confidence.

Responsible full grow-out closed containment will happen, but needs partnership and time to develop. We plan on working with whatever political party that is in power to move forward in a reasonable way to protect Canada’s marine environment while at the same time supporting marine farming, its sustainable practices and promise for good jobs in rural, coastal and Indigenous communities. We can and must develop this sector that promises to grow incredibly healthy, sustainable food for Canada – and the planet’s – future.

Timothy Kennedy is President & CEO of the Canadian Aquaculture Industry Alliance. With a background in environment & resources policy consulting and as an executive in the energy sector, he is a passionate advocate for Canada’s farmed seafood sector and has a vision for the potential sustainable growth for the sector in the global seafood marketplace.