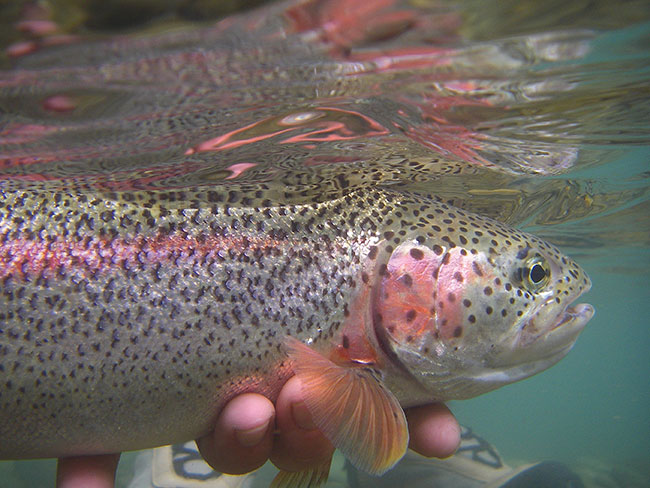 An aquaponics facility in Surrey, BC is growing rainbow trout as a supplementary crop to water lentils, a nutrient-dense aquatic plant (pictured) that lives on the surface of the water Photo: © michael / Adobe Stock

This month of May, the first young rainbow trout will arrive in Surrey, British Columbia at the first aquaponics facility of Vancouver-based company Pontus. Both trout and a highly-nutritious crop called water lentils will be produced organically.

The Surrey facility is nearly finished, 20,570 ft2 in size with the fish area comprising 1650 ft2. Construction began last June. Nine people will be employed at the facility, including Steve McArthur, founding partner and chief technology officer. The facility includes an area for fish processing and packaging, water lentil processing and packaging, a lab space, offices, a commercial kitchen for trout and water lentil product development headed by the company chef, and a dedicated studio kitchen for social media video production.

“We’ll produce 10.5 tonnes of rainbow trout a year, 12,000 trout harvested at 1.1 kg which is about nine months of age,” says McArthur. “We are getting older fish with our first delivery and so we’ll have fish ready to sell six months after May arrival. We have an agreement with a BC-based hatchery for monthly fingerling delivery and that will continue at this facility, but down the road at future facilities, we will have our own hatching, fingerling production and grow-out.”

Rainbow trout are among the toughest fish to cultivate, but McArthur and his Pontus colleagues chose them for that reason. McArthur calls rainbow trout ‘the princesses of the fish world,’ and says that if they can produce that species, they can easily pivot to producing perch or Atlantic salmon if needed.

Rainbow trout were also chosen because of the ready market at grocery stores and restaurants in BC. “We will process on site and also use the commercial kitchen to provide a wide variety of products depending on orders,” McArthur explains. “We will ship fresh and frozen, whole, head-on gutted, filleted, smoked, breaded and candied. We haven’t signed any contracts so far but we’ve had many discussions with retailers and restaurants about their needs.”

“We think we’ll sell a lot of sushi-grade fish to restaurants (for ‘poke’ bowls) and grocery stores in various forms,” McArthur adds. “We decided to have our own processing as we wanted to ensure we ship high-quality products. Every week we’ll have one day dedicated to fish harvesting. We don’t anticipate any labour issues. We are lucky because we are getting up and running at a time right now when there are people who are being laid off from the net-pen operations that are being shut down in BC. We will be able to hire some of those people.”

The organic feed is being sourced from Skretting, and McArthur anticipates an average feed conversion ratio over fish lifetime of 1.17. 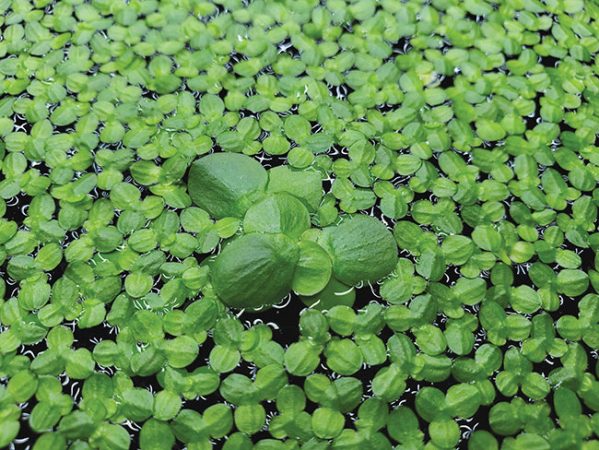 Tank system
The Pontus facility has 11 tanks, one for fingerlings and three sets of three tanks where fish will moved up in series once a month. The system has a water treatment zone, biodigester and two purge tanks. The adult run is 36-feet long with water turnover of the entire system occurring every 20 minutes.

McArthur explains that water flow is decoupled in that the fish RAS system has its own process flow and so do the water lentils. Mixing between the two will be very limited and two temperatures will be maintained. Fish water will be filtered, with the fish waste spending 15 days in the biodigester and then added to the water lentil tanks. The filtered water will go through a UV system and a moving-bed bioreactor where bacteria will convert ammonium from the fish waste to nitrite and nitrate. Some of this nitrate will also be ‘fed’ to the plants.

The system was designed by Marc Laberge of Quebec-based ML Aquaponics, who has decades of experience in the field. Laberge is also overseeing construction led by ICE Constructors from the neighbouring township of Langley . “We’ve been very detailed with the design and meeting all the regulations,” says McArthur. “The facility is entirely biosecure with air showers.”

The LED lighting for the water lentils is expected to provide all building heat. “We have a lot of lighting in that section, over 1,000 fixtures running 16 hours a day, and a complex HVAC system with air mixing and heat exchangers,” McArthur explains. “It’s designed by BC-based AME Group. I have worked with them on indoor aquaculture operations since 2017 and they have a lot of experience. We plan to have solar panels installed on the roof in the future.”

Before joining Pontus, McArthur owned Garden City Aquaponics near Victoria on Vancouver Island and operated it from 2015 to 2020. He cultivated black Nile and red Nile tilapia with various leafy crops such as lettuce, microgreens and herbs. He sold his fish to grocery stores and restaurants.

“In 2018, I had a meeting with Pontus leaders Connor Yuen and Alson Niu and they asked me to try growing water lentils in one of my nine grow beds,” says McArthur. “Pontus was incorporated later that year and contracted Garden City Aquaponics to grow water lentils. Later, they found the site in Surrey and moved all my aquaponics equipment into the lab space there in late 2020. I look forward to continuing a strong data-gathering mentality as we move forward with the trout and water lentils. Both products are highly nutritious, organic and in demand.”