2019 began full of promise for British Columbia’s salmon farmers then they found themselves at the centre of Canadian politics. 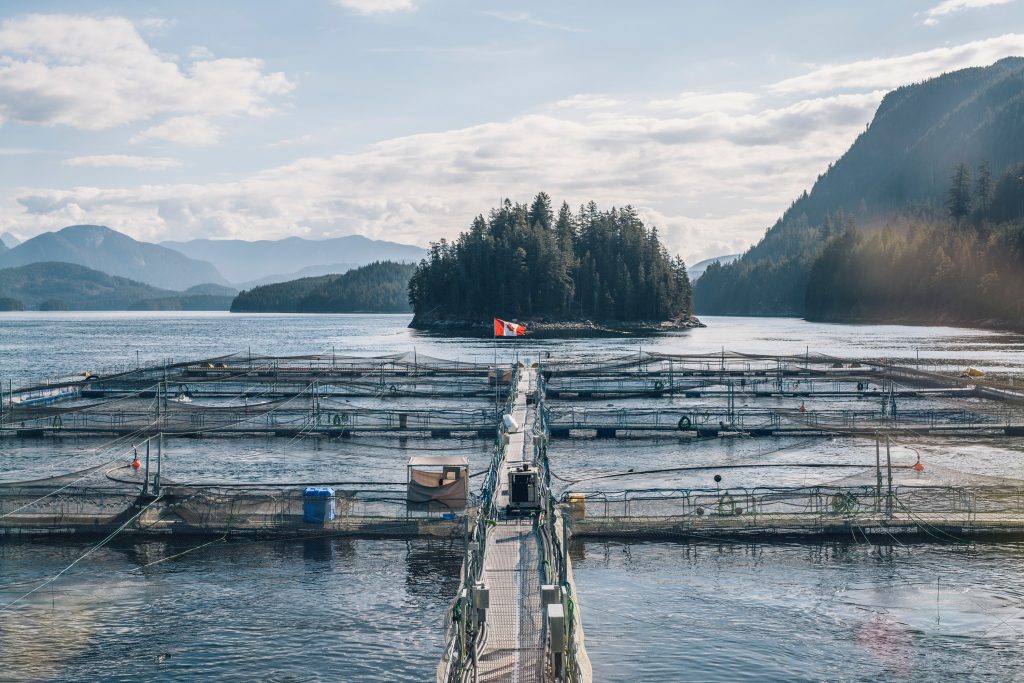 “Jovial” summed up the mood of John Paul Fraser as he took the call for this interview. Stepping away from the noisy crowd at the annual conference of municipal leaders in BC on September 25, the executive director of the BC Salmon Farmers Association (BCSFA) was happy the industry was not on the agenda this time. “Last year we were on the agenda. This year we have a booth in the exhibition hall where we’re serving our farmed salmon. We brought tons of it but I don’t know if we brought enough,” he says. One could hear the pride in the voice of a leader who helped see the industry through a difficult year.

But just four days later, Fraser would have more to worry about than having enough salmon to serve guests. Canadian Prime Minister Justin Trudeau announced that if given a second mandate, he would end net-pen salmon farming in British Columbia and transition it to closed containment systems by 2025. Canadians are scheduled to go to the polls on October 21.

The Liberal Party’s platform is “destructive, careless and flies in the face of making decisions about aquaculture based on science and facts,” Fraser would later say in an official statement. The entire Canadian aquaculture industry condemned the Liberals’ plan. 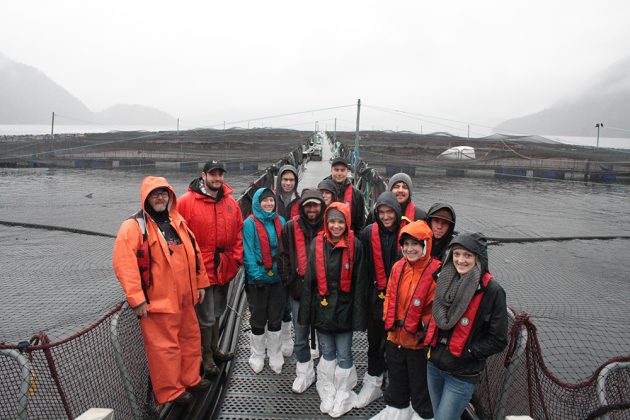 The Liberals’ aquaculture platform will have repercussions for the families of 7,000 middle-class workers in BC, says the BC Salmon Farmers Association (Credit: BCSFA)

Mowi Canada West and Cermaq Canada, interviewed also prior to the Liberal Party announcement, felt accomplished when looking back at 2019.

“Exciting,” was how David Kiemele, managing director of Cermaq Canada, described the year. “We’ve started on a path that’s long overdue. We’ve strengthened existing relationships. We’ve renewed our focus and commitment to responsible farming. We continue to focus efforts in supporting the health and wellbeing of wild salmon. We continue to focus and build on our employees and the culture in the business, continue to look for avenues for growth whether it be here in BC through new relationships or other provinces, and we continue to enjoy farming a very climate-responsible protein in a beautiful part of the world.”

For Mowi, “2019 has been certainly one where we’re finding a good demand for our product,” said Jeremy Dunn, director of public affairs at Mowi Canada West. “One that has seen us spend a considerable amount of time building relationships with First Nations, improving our dialogue in many areas and obviously the conversations and progress in the Broughton has been well publicized and that’s been important for our company as well.” 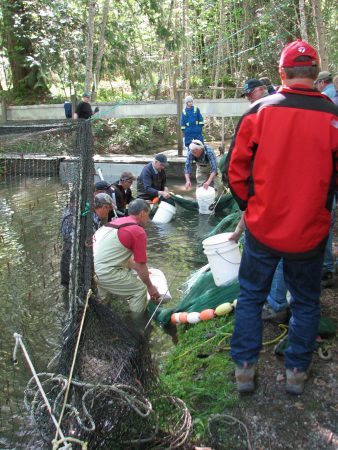 The agreement with First Nations in the Broughton Archipelago reinforces the importance of supporting wild salmon populations (Credit: BCSFA

Kiemele and Dunn were talking about the government-to-government negotiations in 2018 that resulted in a historic agreement on salmon aquaculture in First Nations territories.

The agreement entails the shutting down of 17 Atlantic salmon farms in BC’s Broughton Archipelago by 2023 because they are in the migration route of wild salmon. First Nations also wanted a role in governing activities on their traditional lands, thus a monitoring program was installed that will see them oversee the transition in the Broughton over the next four years. This includes monitoring fish health, sea lice and pathogens and diseases before and after fish are introduced into the fish farms.

Five of the 17 farms designated for closure have already been shut down as of September. Mowi, which owns 12 of the 17, viewed the deal as “a positive step toward building mutual goodwill, trust, and respect” between industry and First Nations.

Cermaq, which owns the five, also embraced the deal saying it would “help to protect and enhance wild salmon populations and ensure the continued sustainable and responsible production of farmed salmon.”

With a road map now laid out between the industry and the federal, provincial and First Nations’ governments, 2020 is supposed to be the year when the industry moves forward.

For Mowi and Cermaq, that includes continued negotiations with First Nations to reach agreements that would allow them to continue operating the rest of the 17 farms in the Broughton beyond 2023.

Kiemele of Cermaq Canada sees the next four years “as an opportunity to put ourselves in the best place possible for extending operations and relationships in the area.”

“And now we can actually see that agreement on paper put into action in practical terms. This will involve multiple visits to the site, developing thresholds for key criteria like sea lice and fish health with and in collaboration with the nations and then move that forward,” Kiemele said.

In the meantime, both companies aim to keep their annual harvest numbers steady despite the closure of some of their farms in the Broughton.

For Mowi to maintain production numbers averaging 45,000 tons of salmon annually, Dunn said Mowi is able to amend tenure agreements in other areas that allow for “modest increases” in production where it is environmentally responsible to do so.

“This might mean that a farm is increasing its maximum allowable biomass by 8 to 12 percent depending on the farm site and the area that we’re in. So you might see a farm that has eight pens becoming a farm that has 10 pens, for instance, and it would have a few more salmon stocked on that site. These are incremental growth that are allowed and are possible through detailed environmental assessment and monitoring, ensuring that the biophysical capabilities of that particular site can handle more fish with no real increase in the footprint of the operation,” he says. (Dunn left Mowii days after this interview.)

Cermaq produces around 21,500 GWE annually in BC. It is looking at multiple options within its existing sites “to make sure that we don’t see a drop in annual production and that’s something that’s been our mandate all throughout this process and continues to be so today,” Kiemele said.

“Now we are in a position to start to be a little more forward-looking,” said John Paul Fraser. “Not that we’re not forward-looking already–our companies spent a lot of time thinking of the next thing, the next competitive edge, the next innovation in fish health, in gear, equipment, new markets, the next value-added to a product–that’s always happening but as an industry, in partnership with government community, what does the future look like collectively? What does growth look like? What do we see 10 years from now? How do we get there?”  These questions he said would be discussed at the association’s Annual General Meeting scheduled on November 20. The Liberals’ plan to move the industry to closed containment systems by 2025 will influence those conversations. 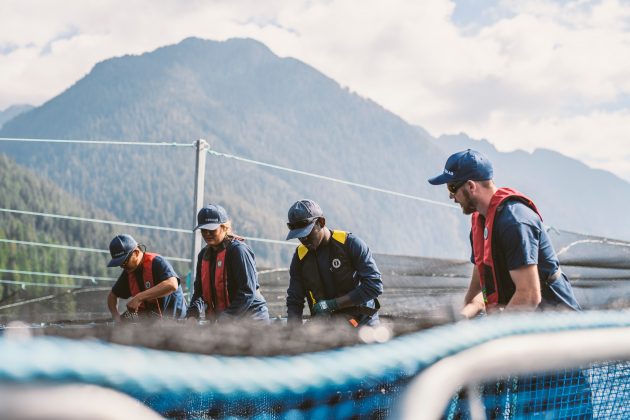 Cermaq Canada employees securing net at BC site. ‘People talk a lot about equipment and feed and technology, but we’re farmers and a huge element of this business are the people,” said David Kiemele, managing director, Cermaq Canada

We’ve been here before

The politicians’ pledge may not even happen, but for now it is a threat that looms over the industry. If the past year was any indication however, BC’s farmed salmon industry has weathered storms before.

“The progress made in the Broughton area in the last year has been remarkable and shows what can happen when people work together in British Columbia,” BC Agriculture Minister Lana Popham, said in an email to Aquaculture North America (ANA).

Fraser of BCSFA paid tribute to the salmon farming community. “I haven’t been in this industry for very long, but long enough to see that the people who have dedicated their professional lives to it are up for that conversation and they’re up for that engagement with communities to build that life that’s going to make you proud. I cease to be amazed at the level of skill that exists in aquaculture both on science, economic, technology and leadership and also the emotional intelligence that exists in aquaculture.”

“People talk a lot about equipment and feed and technology, but we’re farmers and a huge element of this business are the people,” said Kiemele of Cermaq.