BC First Nation: We will manage fish farming and fisheries on our land ‘with or without the Canadian government’ 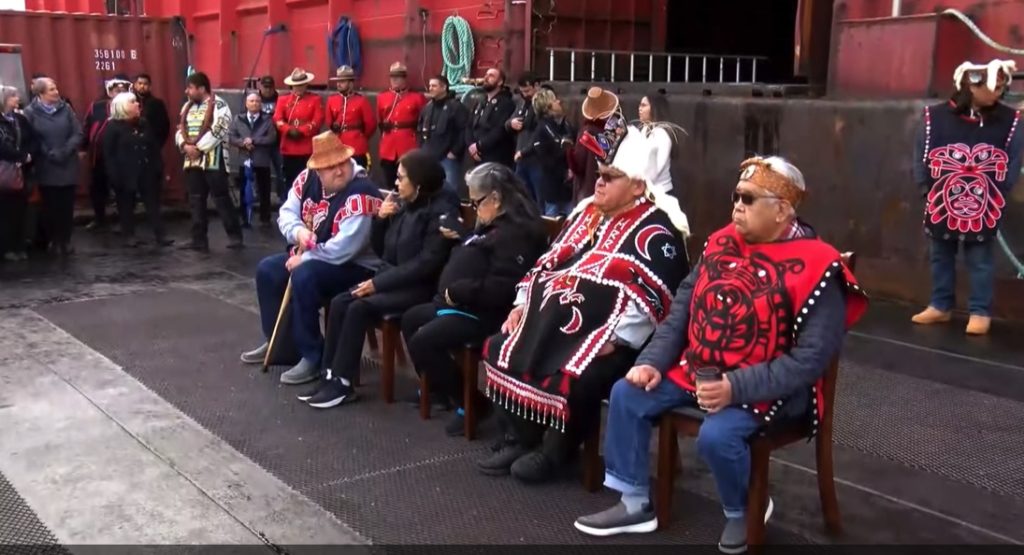 First Nation elders and guests gathered in Port Hardy, British Columbia on Friday (25 March) to celebrate the joint success of the Gwa’sala and the ‘Nakwaxda’xw peoples in the marine economy. (Photo: Gwa’sala-‘Nakwaxda’xw Nation)

Two Indigenous peoples in British Columbia today (25 March) re-asserted their authority over their territories “with or without the Canadian Government,” including how fish farming and fisheries will be managed.

The Gwa’sala and the ‘Nakwaxda’xw peoples – now known collectively as the Gwa’sala-‘Nakwaxda’xw Nation since being forced to relocate and combine as a single tribe in 1964 – plan to administer its own fisheries and aquaculture licensing regime “after a failure of the Canadian government to conserve their fish stocks through permitting of overfishing and adequately mitigate impacts from resource development.”

“Implementing local First Nations management practice is the only pathway to recovering fish stocks and supporting their local community economy at the same time,” they said at this morning’s cultural boat-blessing ceremony that celebrates their joint success in the marine economy.

The First Nation’s marine business has been working for the salmon farms along the BC Coast for the past nine years, hauling feed, transporting crews, and delivering specialty equipment and services. The company, called K’awa’tsi, now provides about $9 million in direct annual revenue and 23 jobs, with 16 of those filled by Indigenous people.

The Indigenous community is also building a co-governance body with their neighbouring Nations as part of a “North Island Aquaculture Zone,” which “will study the impacts of the farms and ensure that our fish, shellfish, seaweed and all other life remain healthy so that we have food for our community on a regular basis,” says Ethan Shaw, the Nation’s Salmon Farm Monitor.

“We have witnessed the decline of our wild fish in Smith Inlet where there are no farms. We need to take a stand and do right by our ancestors – and that means doing what it takes for our community by developing an economic base for self-government and self-determination.”

“The Gwa’sala-‘Nakwaxda’x people are committed to creating and sharing a prosperous future for ourselves and for our local communities. This is what reconciliation looks like. It’s happening in communities like Port Hardy. It makes the future look hopeful.”