BC Salmon Farmers respond to in-person consultations with Minister Murray 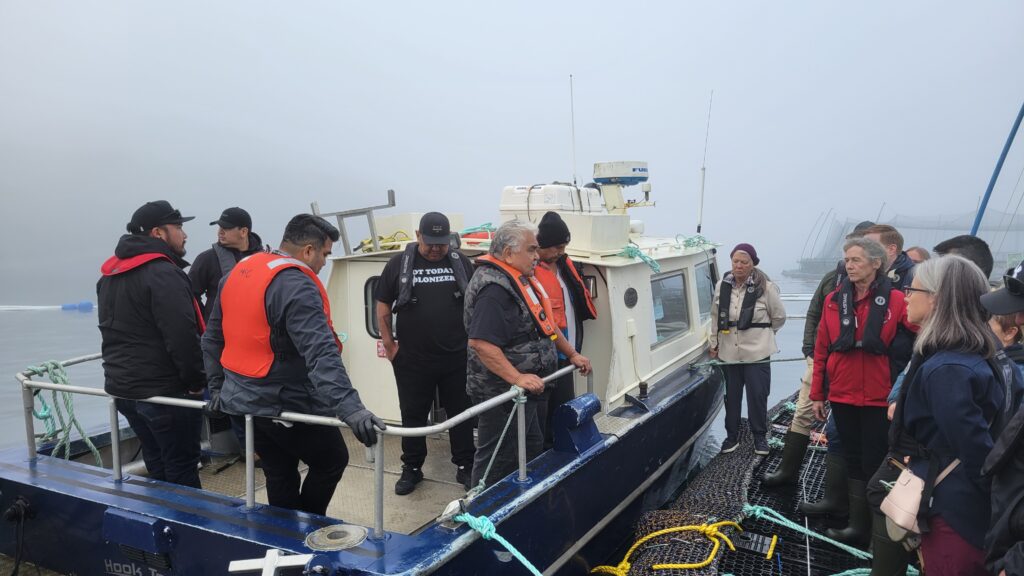 “We don’t see [salmon farming] as a significant risk. We hope the Minister understood that no matter what she’s going to decide, we’re going to be sticking by our rights and title. We expect the government to do the same,” said Isaiah Robinson, Kitasoo/Xai'xais. (Photo: First Nations for Finfish Stewardship)

BC Salmon Farmers had the opportunity to meet with the Department of Fisheries and Oceans and the Canadian Coast Guard (DFO) Minister Joyce Murray last week. Throughout the week, the Minister met with various salmon farming companies and other members of the BC Salmon Farmers Association (BCSFA) and toured several salmon farming facilities across Vancouver Island.

In addition to the tours, productive meetings were held between salmon farmers, suppliers, and the Minister, where she expressed her interest in co-developing a transition plan with the sector “that will provide a range of metrics and tools to meet environmental objectives and protect wild salmon.”

“Salmon farming is continuously evolving, improving, and innovating, which can come as a surprise to those outside of the farming community. It was a pleasure to meet with the Minister and her team to not only discuss these improvements but showcase them, as she visited several farm sites and a hatchery,” said Ruth Salmon, interim executive director for the BCSFA.

“It was heartening to hear that the Minister is seeking to work with us to support the development of the Transition Framework. In order to successfully drive further innovation and technology adoption, there needs to be flexibility to allow for various pathways. The ecosystems in which we operate, as well as the priorities of the Nations in whose territories we operate are diverse. We need to have a full suite of tools and options available to ensure we are meeting the expectations of the Nations, protecting wild salmon populations, and providing healthy and sustainable meals,” said Salmon.

While the salmon farming sector is fully committed to working with the Minister to develop this transition plan, it does have concerns about the rushed timeline that Minister Murray has set for this process. The short time frame set for consultations on the farmed salmon production areas in the territories of the Laich-kwil-tach, which has been referred to in the past as the Discovery Islands region, are of particular concern.

“The farms in these areas, are critical to the future of the sector, as well as to those First Nations who view salmon farming as a means to socio-economic stability for their communities. Given the importance of the production areas within the Laich-kwil-tach territories, our sector stresses the importance of those First Nations to be integrated into the larger discussion of the Transition Plan, instead of being addressed as a separate region,” added Salmon.

BC Salmon Farmers stated that they look forward to additional dialogue with the Minister around these important issues, as well as the opportunity to host more farming and processing tours in the future.