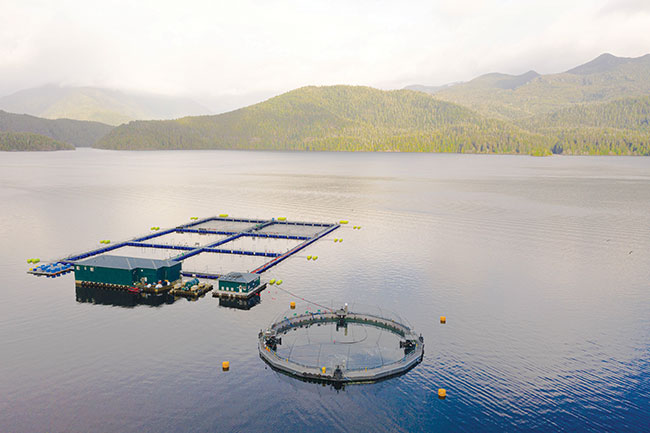 Semi-closed cage being tested at Cermaq’s Millar Channel farm site in BC. Innovations will be pursued when there’s certainty about the future of aquaculture, say stakeholders Photo: Cermaq Canada

The change in leadership of the federal government department in charge of regulating aquaculture in British Columbia is giving salmon farmers in the province some hope that things will change for the better.

Canadian politician Bernadette Jordan exited her post as Minister of Fisheries and Oceans Canada (DFO) following her defeat in her electoral district in Nova Scotia during the federal election this past September. Some saw her loss as a reflection of her handling of a dispute involving Aboriginal fishing rights in that province.

In British Columbia, Jordan’s December 2020 order to remove 19 salmon farms in the Discovery Islands area of BC by the end of June 2022 and to immediately cease restocking those farms sent shock waves across the aquaculture community. Some saw it as a political move and a disregard of scientific evidence showing fish farms pose only minimal risk to wild salmon.

BC’s farmed salmon industry is hoping the incoming minister, whom Liberal Prime Minister Justin Trudeau had yet to name as of press time, will find a path that will save “1,500 BC jobs, $21.5 million in annual tax revenues, and up to 10.7 million juvenile salmon and eggs,” which an independent study says will result from Jordan’s decision.

It is not the first time that farms in BC have been shut down in the name of wild-salmon conservation. Seventeen farms were decommissioned in the Broughton Archipelago roughly a year before Jordan’s tenure, but the industry and Indigenous communities met that decision with goodwill because they were involved the process.

“That was a challenging process, for sure, but one that did bring everyone together to create a process for how to move forward versus the way this decision in the Discovery Islands was executed,” recalls John Paul Fraser, executive director of the BC Salmon Farmers Association.

Getting clarity around the oft-quoted “transition plan” around the Discovery Islands order is on the industry’s agenda with the incoming minister.  The lack of “specifics and definition of transition has also created some uncertainty about the future and the direction,” Fraser says, emphasizing that having certainty is crucial for the industry to move forward.

“Innovation in aquaculture is not easy and certainly not cheap. It takes time and takes a significant amount of financial investment that is critical to build the kinds of systems that we’re all looking at and thinking about. But you can’t expect those funds not to follow confidence. So we will continue to strive for that certainty and hope that in the months to come, with the new government, and the new minister, we can work hard to address that.”

Fraser also hopes to see the new minister visit BC to see firsthand the opportunities that aquaculture creates in coastal communities.

“We haven’t had a federal minister come visit and meet our people for a very long time; the pandemic has obviously been a part of that but hopefully we could do that and create a really valuable opportunity to come have a look and learn and meet the people and see what we’re up to,” he says.

In view of Jordan’s decision, salmon producer Mowi Canada West is restructuring its operations in British Columbia so it could maintain its annual production volumes of 30,000 GWT on fewer sites and leaner manpower as the company estimates 200 staff will be let go by end of June 2022.

Mowi Americas COO Fernando Villaroel, in a presentation to investors in March, says the priority now is to secure Mowi’s investment in the BC by forging “local relationship and agreements to support federal and provincial advocacy.”

The aquaculture community is watching developments in BC, especially as the federal government aims to move the province by 2025 from net pen farming to other forms of production systems – a Trudeau pledge during the 2019 elections.

“If you’re an international salmon farming company investing in Canada, what’s happening in BC should make you nervous regardless of whether you’re investing in the east coast or the west coast,” commented Alan Cook, Mowi Canada East managing director, who started his aquaculture career at Mowi in BC in the late ‘90s.

Executive director of the Newfoundland Aquaculture Industry Association, Mark Lane, agrees. “We need more assurance from our federal politicians from coast to coast that they believe in aquaculture, that we have a future in Canada, and that the majority of Canadians support aquaculture,” said Lane.