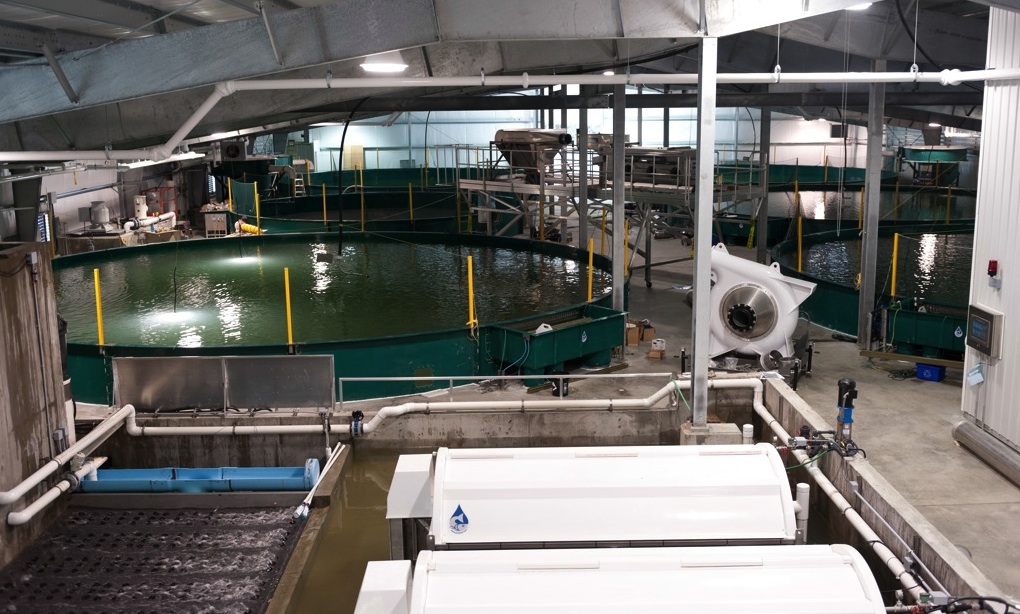 The $8.5 million dollar ’Namgis Closed Containment Project (NCCP) is aimed – initially at least – at proving the viability of producing commercial quantities of harvest-size Atlantic salmon on-land, using UV-disinfected brackish water. More specifically, they proponents hope to rear salmon in a profitable and environmentally sustainable manner, growing them to market size of three to five kgs in about 12 to 15 months.

The first fish entered the quarantine unit in March, 2013 and were transferred to large growout tanks last October. They are scheduled for harvest at 3 to 5 kg in March this year.

Dinneen, who admits that the NCCP is still at an experimental stage, is well aware that the program is being closely watched by many people from inside the aquaculture industry as well as by environmental groups and critics of the traditional net-pen salmon-farming industry.

The operation has been undergoing fine-tuning, refinement and commissioning in a number of areas ever since the land-based farm received delivery of its first cohort of 23,000 salmon smolts from Marine Harvest Canada last spring.

Those have since been followed by another group of smolts, roughly the same number, received in late October.

In the big indoor unit, water recirculation technologies constantly filter, clean and recycle the water so that the unit can make do with very limited amounts of make-up water. Usually as much as 99.8% of the water going through the five 500-cubic-metre tanks is recycled through the RAS.

Dinneen said the system captures virtually all of the fish-waste solids, which are then used as fertilizer.

It is hoped that the ‘Namgis Closed Containment Project could ultimately rear some 2,500 tonnes of fish a year following an initial trial phase that’s projected to produce about 470 tonnes.

Dinneen elaborated by saying that once the current module has proven itself, it can be expanded with four similar modules, which could employ perhaps up to a total of about 12 people.

“At about 2,500 tonnes, it’ll certainly be the biggest on-land, water-recirculating, closed-circuit salmon farm in North America and one of the biggest in the world,” he said.

Dinneen acknowledged though that there’s still a very long way to go to get to that point, particularly in refining the equipment and systems and optimizing operations and economics.

The NCCP has a contract with the Albion Fisheries fish-wholesaling company to market the salmon into the Canadian and US retail and food-service markets, with an emphasis on the western Canadian market. It will be marketed under the brand name of Kuterra. “Ku” comes from “Kutala”, which is salmon in Kwak’wala and “Terra” reflects the “land raised” aspect of the fish.

The land-locked salmon farm is owned by the ’Namgis First Nation, but it’s been noted that funding for the trial project came from a number of sources, including the Canadian government, Tides Canada, Save Our Salmon, and a number of other conservation and philanthropic organizations.

The operation is loaded with banks of monitoring devices that produce data that’s instantly available to computer-based storage systems, and Dinneen said a backup generator system had been installed and it has a cellphone-based alarm system so that the staff – some of whom live only about 10 minutes away – can be quickly alerted in case of an emergency.

Apart from himself, he said, there are two senior technicians and one junior one, who is currently part of an 11-month training program.