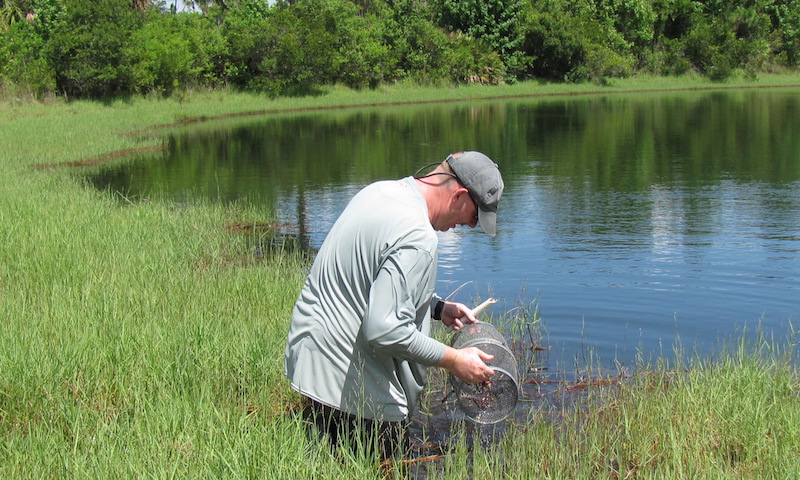 One of the most contentious issues surrounding aquaculture operations across the continent is the escape of non-native fish species and their potential impacts on native species and the environment. As such, researchers from the University of Florida’s Institute of Food and Agricultural Sciences conducted a study looking at the incidence of non-native escapes and Best Management Practices (BMP) compliance, which has shown very positive results for the industry in the state.

“One of the criticisms of aquaculture in regards to non-native species and sustainability is escape of non-natives into the environment,” says Dr Jeffrey Hill, University of Florida professor, extension specialist, and one of the co-authors of the papers and extension publications generated by the study. Hill says the study was highly recommended for funding by the aquaculture industry in the state, particularly the tropical fish aquaculture sector, which comprises the majority of non-native farmed species in Florida.

“Politically, at times, it’s definitely an issue,” says John Skidmore, president of the Florida Tropical Fish Farms Association and owner and operator of Golden Pond Tropicals Inc. “It comes up here and there. There are some non-native established fish here that were a result of the farming industry, but most of those have been established for quite a while. The vast majority of the tropical fish that we produce cannot survive free, so even if they get out into local waters they get wiped out.”

Under the Florida Department of Agriculture and Consumer Services, aquaculture operates under mandatory, outcome-based BMP. They are non-prescriptive, however, they contain provisions for many aspects of the operations including effluent, aquatic animal health and non-native species containment, among other aspects.

“One of our applied research channels is helping this idea of preventing escapement, evaluating best management practices, getting more information on those and helping producers comply with those regulations.”

The process of Hill’s work involved a review of BMP in the state, and then accompanying Department of Agriculture officials on their twice-yearly BMP inspections and touring 23 different fish farms in central Florida and scoring BMP compliance independently of the inspectors so scores could be compared after the fact. They also sampled from those facilities every month to determine if non-native fish were escaping.

“We were collecting literally from the effluent on the fish farms, and we had a sampling scheme that worked our way downstream through the ditches, which are typical in this part of the state to the more natural streams and wetlands, and then on to the larger systems.”

The results of the study were very positive to both aquaculture producers and the BMP, finding high rates of compliance by fish farmers. Non-compliance issues were generally very minor and easily corrected.

“There were cases of fish off-site, where some fish were escaping in small numbers,” says Hill. “That was pretty much one of the big findings – the rate of escapement is relatively small in number and the compliance was high. We did find some things that were related to reducing those problems of escape or non-compliance – having a detention pond or retention system helps immensely. We had a couple of facilities that did not discharge off-site at all and they had zero BMP compliance issues. Even those who discharged through a detention pond, there were very, very minor issues with those, if any.”

Skidmore says that the type of fish raised is a big reason for the low numbers of non-native species downstream from aquaculture operations – the majority of tropical fish raised in Florida aquaculture operations are completely incapable of surviving the more aggressive predators that lurk in the waters. Escaped non-native species were found primarily near effluent, with numbers dropping dramatically as researchers moved further away from the farms.

“Mosquitofish (Gambusia affinis) are a pretty vicious consumer of anything that escapes,” says Skidmore. “They attack by numbers. First, they’ll eat the eyeballs out and make the fish blind and then will just start pecking at them.”

Skidmore’s Golden Pond Tropicals was one of many farms included in the study. He says many fish farms were eager to participate in the study to help separate fact from fiction as it relates to these issues, but also to improve their own processes if necessary.

“We may have learned something that we could use to make our BMP even better,” says Skidmore. “If it wasn’t working, then we needed to do something about it. But for the most part, we found that it was working. Looking at a problem scientifically, we were able to get away from the noise that’s out there that’s not based on any science, that’s just based on supposition.”

Hill says that another indicator of the success of BMP in Florida is how they did not discover any escapes of conditional species which are regulated at a higher level than many of the tropical fish.

“We view it as a risk-based approach,” says Hill. “What are the risks of these species? Based on our research, we would say [tropical fish escapes] are not a major environmental issue. Obviously, you keep up with regulations, and we do risk assessments and do work on other species to make sure we don’t get those in the environment. In research, we didn’t find any escape of conditional species. So from the facilities that had a higher level of containment required because of the type of fish they had, we found no escapement of those types of fish form those facilities.”

Hill’s co-authored papers published in scientific journals and within Florida’s own land grant system contain a number of recommendations for aquaculture producers in the state to reduce the number of fish who escape from their operations. Though the tips were intended for the Florida aquaculture industry, many are applicable to operations around the world.

Aquaculture producers should make efforts to understand the process of escape and to determine the most likely points of escape in their facility. Producers should regularly inspect barriers and check effluents leaving the farm for the presence of cultured fish. Attention should be paid to any practices that may increase the chance of escapement, such as pumping. Where practical, detention and retention ponds should help.

Producers should also identify structural and operational strategies to maintain compliance with escape provisions that are in effect in their own jurisdictions. And most importantly, producers should take quick action to correct any escape issues which do occur.