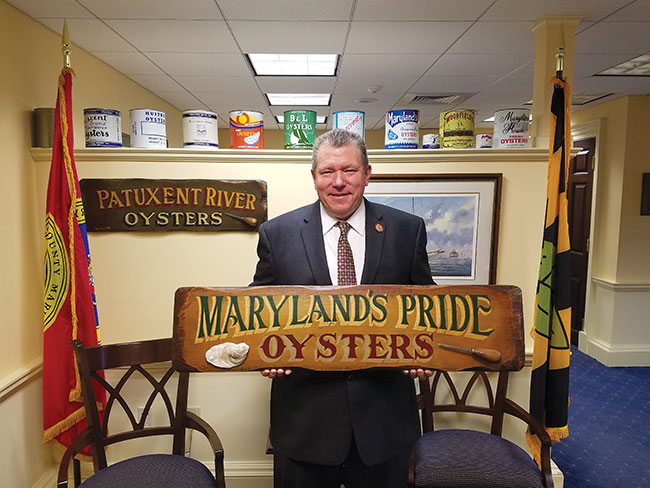 An aquaculture bill being proposed in Maryland may hold the key to resolving conflicts between oyster farmers and landowners in the state and, in the process, stem oyster thefts.

Thefts continue to be a big problem for U.S. oyster farmers (see ANA Mar/Apr 2020), but in Maryland, they are largely not prosecuted because a 2009 law precluded property owners from having a say in aquaculture operations in the waters near their properties.

Richard Fritz, state attorney for St Mary’s county where most of the state’s aquaculture leases are concentrated, believes the law infringes on the landowners’ riparian rights so he refuses to prosecute any case involving theft or damage to oyster farms in front of someone else’s property.

“I was a natural resource police officer for 30 years, so I am extremely familiar with the conflicts that exist between landowners and watermen. I have negotiated and been involved in quite a few of them,” said Bailey. “So I introduced this bill for aquaculture conflict resolution.”

SB711 is intended to compel the Department of Natural Resources to seek conflict resolution between property owners and farmers. If a property owner objects to a lease that’s 50 feet off their shoreline, could a compromise be reached to move that lease to 100 or 150 feet offshore?

“I believe that is the way to successfully manage this,” added Bailey. “If we give them some buy-in to be involved in the process, I think they will be the best protectors that you could ever have. They’re going to watch it, to make sure nobody messes with it.”

The bill was unsuccessful in the Maryland General Assembly in March due in part to the assembly adjourning nearly three weeks earlier than planned because of the COVID-19 pandemic. Bailey is planning to reintroduce the bill in the next legislative session in January 2021.