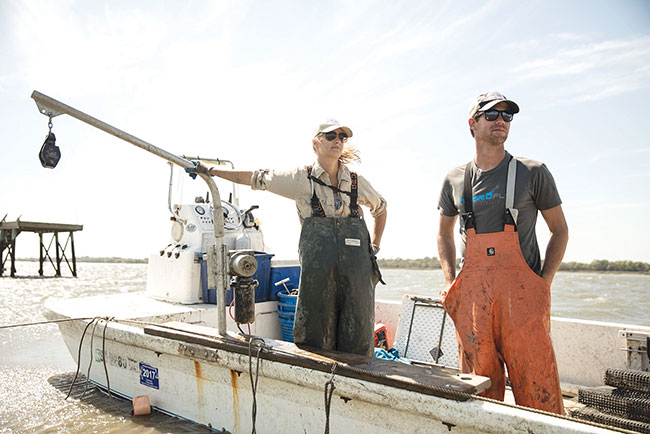 Caitlyn Mayer studied geology in university alongside her husband Peter Bierce but she avoided the most obvious career path ahead of her.

“A lot of people who studied geology end up working in the oil industry,” says Mayer. “It’s good to have environmentally conscious people involved in it but we held out for something that was more environmentally aligned with our ideals.”

Peter’s twin brother Thomas, who was involved in oyster farming at the time, saw the rising popularity of oysters and convinced the couple there’s business to be made supplying oysters to the raw bars opening up. Knowing the environmental benefits of oyster farming, Mayer and her husband were onboard.

“Oysters are just so integral to our community. We knew this could be an efficient and viable way to not just to create a business, but also to help recreate the environment in Charleston,” she says.

In 2016, the three formed Charleston Oyster Farm and put their first bottom cages in the water.

Today, the farm has around 50,000 Crassostrea virginica oysters in a little over 20 bottom cages, which is only 20 percent of the farm’s full capacity.

The very thick, heavy mud in the farm site makes bottom culture less than ideal, thus while the farm has been permitted for floating cages since 2017, neighbours kept appealing against it. Public attitude towards oyster farms is their number one challenge, says Mayer.

“The people seem really nice,” she says. “They say ‘we don’t have anything against what you’re doing, we just don’t want it near us.’ They just don’t want to have them around. It’s quite similar to what wind farms are going through — nobody is truly against the business but people let what the farm looks like to outweigh the benefits it brings to the economy and the environment.” 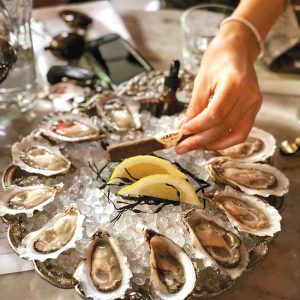 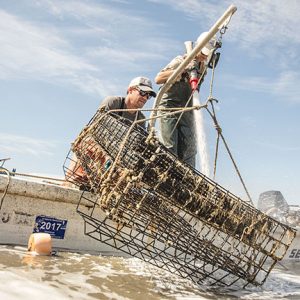 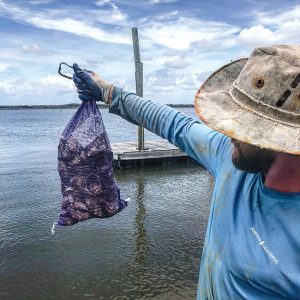 Thomas Bierce, Caitlin’s brother-in-aw, saw the opportunity for an oyster farm in Charleston

The tight regulations around oyster farming is another challenge, albeit less so than the “nimby”(not-in-my-backyard) attitude.

“Oyster farming is a young industry in South Carolina so it is highly regulated. At first, we could get a couple of crops a year and then as regulations tightened our harvest went down to one crop a year.”

Mayer also notes there is little in the way of established infrastructure and logistics for farmers to ship their product very far. Luckily, there’s demand within Charleston so they are able to sell their harvest locally.

“We refer to ourselves as a boutique farm. We’re very small, but we work really hard to create a very good product.”

Meanwhile, there hasn’t been much progress towards developing the logistics in the area because the market isn’t saturated enough, says Mayer, who serves as secretary of the South Carolina Shellfish Growers Association.

The association is hoping to change public opinion about oyster farms and floating cages in the area through education and outreach activities.