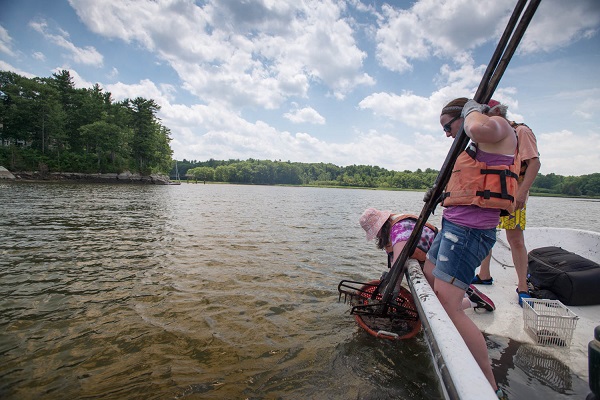 A team of undergraduate and graduate students collect oysters to look at environmental conditions that might favor V. parahaemolyticus. Photo provided by University of New Hampshire Communications and Public Affairs Researchers at the University of New Hampshire have discovered a method to detect a bacterium — Vibrio parahaemolyticus — that has contaminated New England oyster beds and made consumers ill.

In a major breakthrough in shellfish management and disease prevention, researchers at the University of New Hampshire have discovered a new method to detect a bacterium that has contaminated New England oyster beds and sickened consumers who ate the contaminated shellfish. The new patent-pending detection method – which is available for immediate use to identify contaminated shellfish – is a significant advance in efforts to identify shellfish harboring disease-carrying strains of Vibrio parahaemolyticus.

“Since 2012, the Northeast has been experiencing an ongoing outbreak caused by a non-native strain of V. parahaemolyticus that is endemic to the Pacific Northwest. The presence of pathogenic V. parahaemolyticus is rare in the Northeast as cooler water temperatures protect against bacterial growth,” said Cheryl Whistler, Associate Professor of molecular, cellular, and biomedical sciences, in a press release.

However, with the regions’ rise in ocean temperatures and unusually heavy, intermittent rainstorms, conditions have changed over time.  V. parahaemolyticus is the most common bacterial infection acquired from seafood in the world. There are an estimated 35,000 cases each year in the United States. In recent years, there has been an increase in the incidence of shellfish contamination, which has caused costly recalls of shellfish and shellfish bed closures in Connecticut and Massachusetts.

Some strains of the microbe cause disease and others do not and “a significant challenge for managing shellfish harvesting to prevent infections is that we were previously unable to tell the difference between this strain and harmless residents. The new detection platform will provide rapid, and more importantly, specific quantification of the invasive strain, we hope allowing more effective management of harvesting that will protect this important regional industry.”

The research is presented in the forthcoming issue of the Journal of Clinical Microbiology in the article “Use of Whole Genome Phylogeny and Comparisons in the Development of a Multiplex-PCR Assay to Identify Sequence Type 36 Vibrio parahaemolyticus.”