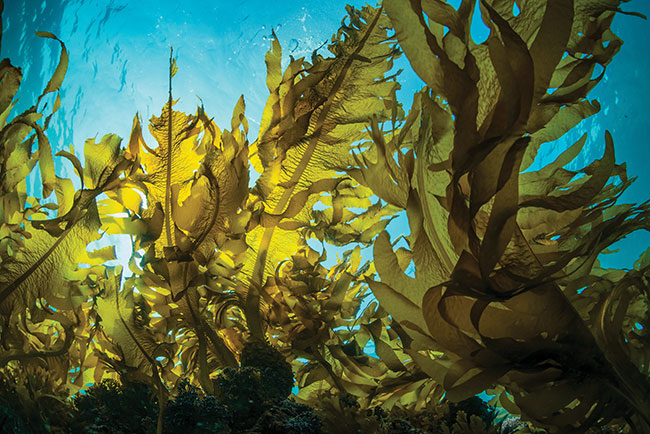 While media coverage has often cast controversial salmon operations in a harsh spotlight, seaweed and shellfish farms have been bathed in a golden glow, like an Instagram filter that subliminally suggests environmental benefits and sincere, small-scale entrepreneurs.

That reputation is well deserved and will serve the industry well as operations grow larger because, though exhausted from Covid, these farmers are pragmatic, smart, and not likely to be satisfied with the status quo. They’ve looked up from the mudflats and see new things on the horizon.

“The future is bright,” said David O’Brien, the acting director of NOAA Fisheries Office of Aquaculture, “but there’s a lot more work to be done.”  Here’s some of what’s ahead.

Expect to see public interest in seaweed and shellfish farming increase.
Awareness of aquaculture is growing as food shortages and the climate emergency intensify.  “Over the past few months, terrestrial farming has been under major pressure,” said O’Brien, pointing to the droughts and record-high fertilizer prices that have been making headlines.

Seaweed and shellfish culture, on the other hand, requires no inputs and, as a regenerative form of farming, is winning public praise. Research presented at the Northeast Aquaculture Conference and Exposition last April found that messages related to environmental benefits—versus jobs or affordable seafood, for example—rank as the strongest reasons to support marine aquaculture’s expansion.

Quantification of those ecosystem benefits will further impact positive public perception.  Case in point: oyster and clam aquaculture delivered US$2.8-$5.8 million in ecosystem services to remove excess nitrogen from the coastal waters of Greenwich, CT, according to a study last year.  Also improving water quality—and gaining fans—are over 150 community oyster gardens off the north shore of Long Island, New York, just across the sound.

On a larger scale, Island Creek Oysters has been working with Northeastern University and the Nature Conservancy to quantify the environmental impacts its Massachusetts farm is having on the local ecosystem, according to Chris Sherman, CEO.

Stay tuned for what environmental mitigation could mean for farmers.
Such activities have led to “a really positive dialogue” that has put aquaculture’s environmental benefits “more on people’s minds,” said Sherman. It’s sustainable and restorative.  And those benefits could have another tangible upside.

“There are great opportunities for both seaweed and shellfish farmers to be forerunners with innovative tools for carbon credits or even nitrogen credits for water quality issues,” he added.

“It remains to be seen exactly what the business opportunity for the industry is to leverage our impact there. But I think in the next few years, we’ll definitely see some breakthroughs on that front.”

These pillars “really demonstrate this very strong and growing cross-agency initiative for aquaculture development,” said NOAA’s O’Brien, who co-chairs the task force on the economic development plan. Members of that group, for example, include federal employees not only from the Departments of Agriculture and Commerce but also the Small Business Administration and the State Department, among several others.

To advance climate-smart food production through aquaculture, Washington is rallying many departments in a whole-of-government approach. “It’s a big deal,” O’Brien said.

Get ready for trade with the European Union (EU) to grow.
In February, the Biden Administration concluded negotiations to resume bilateral trade of live shellfish for the first time since 2011, starting with U.S. producers in Massachusetts and Washington and EU farms in Spain and the Netherlands.

Taylor Shellfish Farms, which had “a vibrant market” in Spain for manila clams before it was shut down in 2010, jumped on the opportunity and found demand is still there, according to public affairs director Bill Dewey.  The Washington-based company, which is the largest producer of aquaculture shellfish in the US, resumed exports to Spain last June.

“We are excited to have the ability to ship to Europe again,” Dewey said.

Adds Sherman of Island Creek Oysters, “It’s an opportunity to expand our horizons, which I think is good ultimately for the industry. It’s a big shift that I definitely expect to have a market impact in 2023.”

Keep an eye on Alaska, as the 49th state’s ‘mariculture’ comes on strong.
Although Maine grew more than 85 percent of the cultivated seaweed in the U.S. in 2021, Alaska, which only began issuing kelp farming permits in 2016, will be working hard at catching up—with more than a little help from the government.

As announced by President Biden in September, the Alaska Mariculture Cluster was among the 21 winners of the $1 billion Build Back Better Regional Challenge, a competitive federal grant program.

That means a $49 million award to boost both shellfish and seaweed production in Alaska, with projects that include an integrated hatchery network, workforce training, and a loan fund to help businesses grow.   The approach has been structured with partners which serve tribal, rural, and underserved communities. 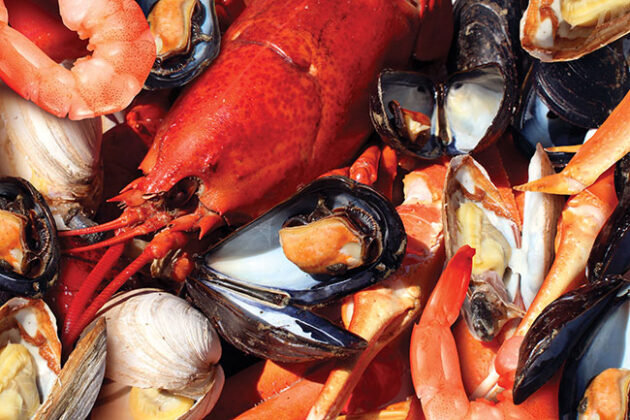 Follow how food production will morph formats to reach more people.
This year, part of Maine-based Atlantic Sea Farms growth strategy has been to “kelp everything”— going beyond frozen and fermented retail products to wholesaling seaweed in various formats as an ingredient for cheese, noodles, crackers, and dietary supplements. Starting in October, new plant-based crab cakes will feature Atlantic Sea Farms kelp.

The Island Creek team is also looking at how to bring oysters to customers in new ways, such as frozen or canned formats.

“Delivering a fresh product is an expensive endeavor,” says Sherman.  “New formats can help us bring this food product to people along all points of the economic spectrum, plus reduce the carbon footprint and supply chain.

“To do that, it’s also about scaling up production and achieving efficiencies in a way where we can deliver the product at a more affordable price.” He believes such innovation could come in the next year or two.

Atlantic Sea Farms, which prides itself as a model for doing well by doing good, houses seaweed hatchery operations, processing, consumer product development, and marketing under one roof. It does everything except actually grow the kelp, but it supports its network of 27 partner farmers, mostly lobstermen, with everything from free seed to lease application assistance.  It’s a structure that works, as evidenced by a record-breaking harvest of almost one million pounds of kelp this year.

Island Creek Oysters, on the other hand, built its vertically integrated company from the core of a farm.  As top chefs at restaurants—and the White House—began featuring its eponymous oyster, it launched hatchery operations, a distribution company representing over 100 farms, a retail business, and a restaurant group.

Likewise, Hoopers Island Oyster Company in Maryland started as a grower and expanded not only into hatchery operations but also equipment manufacturing.  When managing partner Ricky Fitzhugh, an entrepreneur at heart, saw needs in the industry, he started businesses to meet them.  In August, he announced a new oyster restoration division that works with environmental groups and watermen associations to plant spat-on-shell on reefs in the Chesapeake Bay, the largest estuary in the US.

Don’t expect workforce challenges to disappear, alas.
Like other companies, Fitzhugh acknowledges the difficulty of recruiting and retaining employees today. “I don’t see that changing any time in the next year or so,” he added.  That’s another reason Hoopers Island is moving forward aggressively with labor-saving equipment.

With customers in the U.S., Canada, and Japan, its products range from nursery tanks to farm gear to sorting/grading equipment.  Fitzhugh points in particular to the industry’s first laser-guided processor, which allows a single operator to grade, sort, and package more than 6,000 oysters an hour.  Another product, a shell chipper, increases shucking production by about 40 percent.

At Hoopers Island, the equipment division accounts for approximately 60 percent of company revenue, proving the value of new lines of business.

Look for cultivation of other shellfish species to accelerate.
Harmful algal blooms (HAB), diverse and frequent, have become an increasing threat in coastal regions globally.  Researchers have learned that different algae species impact different types of fish and shellfish.

“In the last 10 or 15 years, everyone has grown a lot of oysters. Particularly in the Northeast, the industry’s become pretty monolithic and could become subject to some sort of large-scale shift in the environment, like an algae bloom,” said Sherman.

To manage that vulnerability, farmers are putting on the hats of risk managers and exploring differentiation.  At Island Creek Oysters, founder Skip Bennett “has been working almost exclusively on R&D for other species,” said Sherman. Bay scallops, surf clams, and even hard clams all remain possibilities for the future. Island Creek already offers seed for all of these species from its hatchery.

“Making sure the technology is ready so that we can capture the opportunity when things do shift is a big priority for us,” Sherman said.