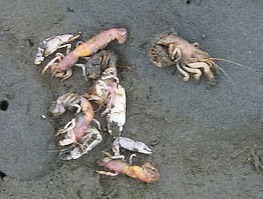 Washington growers caught between a rock and a hard place

Burrowing shrimp actually refers to two species, ghost shrimp and mud shrimp, which inhabit the same tidal flats from California to Alaska.  The same areas that are cultivated for oyster and clam production.

Burrowing shrimp do just that, they dig and live in holes, that can be up to a meter deep and as dense as 100 per square meter.  Those holes and the shrimp’s habit of stirring up the sand, destabilize the seabed.  The result is a quicksand-like muck. Grown men have been know to sink to their hips.  As a bottom-cultured oyster grows and matures, it may sink in the muck and be smothered.

Things weren’t so bad when the native Olympia oysters prevailed.  Olympias clustered together and formed reef structures that float on the sand.  Olympias and the burrowing shrimp existed together.  But in the 1920’s Olympias in the Willapa Bay and Grays Harbor oyster beds were overfished to extinction.

Growers came in and replaced them with the faster growing Pacific (Japanese) oyster and moved up the tide zone.  “The native Olympias grew in the low intertidal and subtidal zones,” explains Brett Dumbauld of the US Department of Agriculture Research Service.  “The Japanese oysters are planted higher in the intertidal zone where the shrimp are more abundant.”

The industry coped until the early 1960’s when the shrimp population exploded.  Scientists point to a number of changes.  Spring freshets may have cleaned out some of the larval shrimp.  “We can kill them in the lab with fresh water,” comments Dumbauld.  But dams now control river flooding. Predator fish like herring and sturgeon have been harvested and those that remain find the bays less hospitable with increased silt in the runoff from area logging.  And ocean temperatures are rising.

The solution in the 60’s was to spray a pesticide, carbaryl, a potent neurotoxin.  That worked until the early 2000’s when a legal challenge and public pressure persuaded growers to phase out the chemical by 2012.

Kim Patten, Pacific County Extension Director and Extension Professor at Washington State University started to look for more natural alternatives.  There is a long and creative list – electric shock (the shrimp burrowed deeper), sprayed concrete (they poked through before it dried), propane in the burrows (it wouldn’t ignite), spicy habanero peppers, high pressure water hoses, even dynamite.  But nothing worked.

Frustrated growers (a $35million industry and ¼ of the US production) looked to chemicals for help.  They settled on the pesticide imidacloprid.  It could be used in much smaller amounts than cabaryl and was effective in paralyzing the shrimp so they would suffocate in their burrows. The US Environmental Protection Agency gave approval in 2013 and in April 2015, the Washington State Department of Ecology issued a permit to apply imidacloprid in areas of Willapa Bay and Grays Harbor.

But the Willapa Grays Harbor Oyster Growers Association (WGHOGA) picked up a very hot potato.  Imidacloprid is a neonicotinoid (think neonics and bees) and the subject of much controversy.  It also had never been considered for use in water and, unlike cabaryl, it dissolves.

Public backlash was swift and critical.  Chefs balked and threatened to cancel orders, social media twittered away and within a week WGHOGA had cancelled their permit before spraying a drop.

What’s next?  “The level of new shrimp recruits this summer and fall is alarming and doesn’t bode well for the long term of the Willapa and Grays Harbor industry, unless something can be done to deal with the problem,” says Patten by email.

Dumbauld has been monitoring recruitment movements for a while.  “Like most animals, the shrimp are most vulnerable in their early stages,” he points out.  Dumbauld has been working with water temperature and salinity levels as a means of controlling larvae, but those methods also have environmental impacts.

“We currently have no new viable control options available, and I am locked out of doing just about any type of control work without an NPDES (National Pollutant Discharge Elimination) permit.” says Patten.

Patten doesn’t know if the growers will apply for a new permit, “If they do go forward we don’t know when, or the conditions that they will request. Because of the time frame required to issue a permit, there will be no treatment in 2016.”

Growers are looking at alternate growout methods.  But the weak substrate may not hold the infrastructure needed for suspension techniques.  And any new gear will come at a cost.

Ironically, there is a non-native parasite, an introduced isopod that preys on the mud shrimp.  It sucks the shrimp’s blood and females do not have the energy to reproduce.  The isopod limits mud shrimp populations in some areas, but in other areas larvae drift in on ocean currents and the ghost shrimp remain healthy.

“I am left to just doing monitoring of recruits, reassessing the impact threshold levels, some trapping /covering work, and we are writing up all our previous work for publication.,”  says Patten. “None of these will result in something that will resolve the problem.  All of this is very frustrating- seeing this huge need, but having my hands tied.”