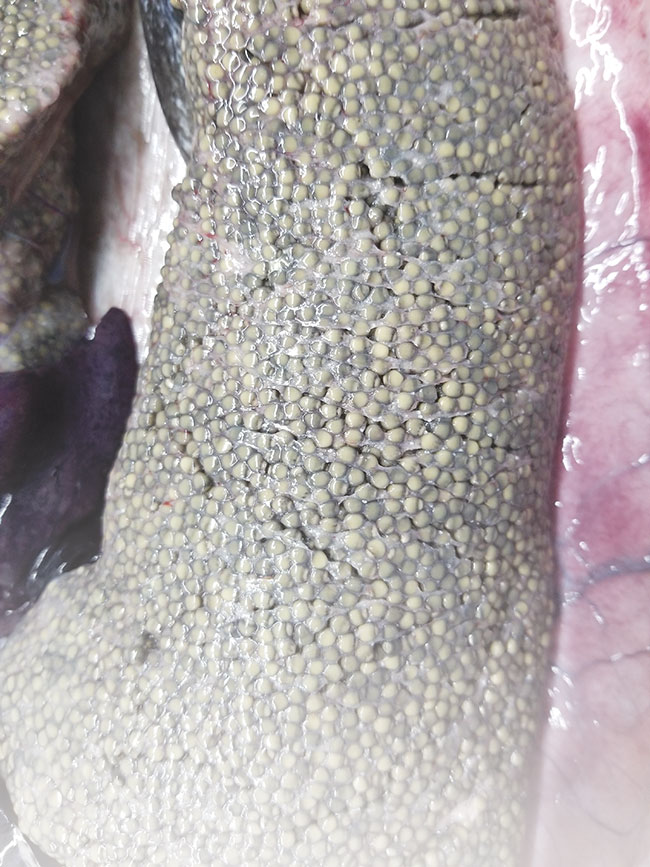 One can’t blame marine biologist Hana Wilms for fondly referring to her father and co-worker as “caviar master.” After all, Auggie Wilms does more than manage the day-to-day operations of Tsar Nicoulai Caviar Farm as farm manager; he also samples regularly one of the world’s most expensive food, all in the line of duty.

If that sounds like a dream job, it doesn’t mean it’s an easy one. It takes years to develop the skills to determine the sturgeon roe’s readiness for harvesting by examining its most basic qualities – taste, color and size. The wrong choice can hit the company’s bottom line. One also has to have patience because caviar production takes over eight years from start to finish.

Given the size of this prehistoric fish (they can grow up to 7-feet long) it takes up to four people to harvest one. On the day of the harvest, Wilms and his team go into a 50-foot diameter tank containing a number of sturgeon with total biomass of 16,000 to 20,000 lbs. The fish in the tank have been pre-selected to be good for caviar for that year. The four grab the fish and turn it upside-down to expose its belly, where Wilms makes a very small incision.

“We’re very fast. We do a very small incision right over the ovaries. We’re staying away from the middle of the fish where the GI tract is. You don’t want to go too high where the other organs such as liver and spleen are. You want to stay in the lower third of the fish on either side of the GI tract,” Wilms says.

He then sticks into the incision a tube smaller in diameter than a drinking straw and sucks up a small amount of eggs. Like a diamantaire examining a diamond for color, clarity, cut and carat, Wilms carefully inspects the precious roe under good light and checks them for readiness.

The team also looks at the fat in the ovaries; leaner ovaries make processing of the roe much easier and the final product better.

And then he checks for what is arguably the most important quality of all: taste. “You put them in your mouth, roll them around, see if they’re firm. You want to make sure it’s not off-flavor. It should taste buttery.”

“And then I eat it,” he laughs, but he’s serious. His pride in the end product, sold under the regally named brand Tsar Nicoulai Caviar is undeniable. “If you selected correctly, it’s not hard to eat,” he says.

If the caviar passes the quality test, the fish are moved out of the production tank into a purge tank where they will stay for about 10 days to two weeks in pure, fresh well water. “This is to clean their system out and to make sure there’s no off-flavor,” says Wilms.

The farm harvests 20 to 30 fish a day during harvest season from January to early March. “We sample them one last time just to make sure that our selection was correct—if they taste good and if they look good,” he says.

The team also checks to ensure the fish have not re-absorbed their eggs (a process called atresia). It is a capability unique to sturgeons under conditions of environmental stress. “Because of the season changing, say, the days are getting longer and it’s getting warmer, the fish can re-absorb their eggs,” Wilms says.

When the fish pre-selected for harvesting end up getting rejected because the roe doesn’t meet the criteria, they are given an additional two years to mature. “Each time they go into a cycle without being harvested, the ovaries come back leaner. There would be very little fat in the ovaries and the eggs are bigger. So it’s a good thing if you can give your fish a couple of years more after they mature and they do their cycle a couple of times. You’ll end up with a much better product and a much better yield.”

Marketers love to use the word “handmade” or “hand-harvested” to imply artisan craftsmanship behind products, and at Tsar Nicoulai, the words are more than a promotional maneuver.

“Our focus is and always will be craft, not volume. We obsess on producing the world-finest white sturgeon caviar. If our quality is large, great; if it’s medium or small that’s just fine as well. Our foodie compass is always pointed to healthy and delicious caviar. It has helped us grow as a business for the last 20 years. That one key value always resonates with our patrons and in the end they are the ones that support our success,” says Ali Bolourchi, vice president at Tsar Nicoulai Caviar Farm.

Farm’s origins
Although raised in the United States, Ali and his father Mark—who owns the farm—grew up proud of their Persian heritage. Ali fondly recalls visiting his grandfather’s sour cherry farm in Iran as a young boy of 10. “Eating a sour cherry rice dish as a kid was a key influencer. It gathered friends and family to share the delicious farm-to-table bounty,” he says. In his mid-20s, Ali and his father visited the caviar-producing areas of North Iran, home of the legendary Beluga caviar.

Their heritage and those experiences perhaps made them realize they’re destined for a career in farming. While they went on to pursue other careers, the two eventually made their way to caviar.

“Previous to our farm acquisition we had a food business that sourced similar products locally and internationally. Ultimately we felt that farming done by our team would produce superior product quality and better sustainable efforts. When my family was forced to leave Iran in 1979/1980, we brought with us a passion for farming to the USA. Our hope as our food business grew was to one day get back to our roots in farming and do so under California sunshine. It reflects our new home and we wanted to give back to our land and our community,” Ali says.

The opportunity presented itself when the owners of Tsar Nicoulai in Wilton, California sold the business in 2015. Says Wilms: “They (the previous owners) had such a hard time getting the fish to spawn. It takes a lot of time to choose the right females to begin with, more so to get them to the state where you actually have eggs hatching. Once you have these hundreds of thousands of little fry, the work continues for seven years keeping them alive, happy, and eating well. It’s a difficult, time-consuming process. You’ve got to know what you’re doing, and you have to understand your system. We’ve been spawning every year since we took it over, which has been a huge plus for this farm.” Aquaculture experts at the University of California-Davis, who in the 1980s started conservation efforts in the state by breeding indigenous white sturgeon (Acipenser transmontanus) in captivity, provided the farm with science-based support, says Wilms.

He adds that farming a species native to the area was a plus. “Inherently, our conditions are well suited for the white sturgeon. They also produce more eggs than, say, green sturgeon that produce really beautiful, large eggs, but their yield is so small that to raise them commercially really isn’t the most practical option.”

Tsar Nicoulai’s signature grade has rich buttery flavors with a hint of brine. Whole Foods stores and high-end restaurants in the US sell the company’s caviar production

Farm manager Auggie Wilms harvesting delicate roe. ‘You want to touch the roe as little as possible while keeping the ovary intact,’ he says

This fish produced roughly 14 kg of finished caviar, the largest of the season

Marine biologist Hana Wilms selecting males in the purge tank that have already been sexed to process for meat. The females are moved into another holding tank. Flipping them over onto their backs makes them calm, making it easier to move them

Total acreage of the facility is 25 acres

Butter lettuce from the green house can be found at Bi-Rite supermarkets in San Francisco, CA

Advances in feed are key
Wilms says advances in feed technology have been a game-changer. “There’s been a change in the last three years to feed that’s being fed to females that you’re going to harvest for their ovaries. Feed can reduce the amount of fat on the ovaries to some degree. But that’s important, that speaks to a much better endproduct. That’s pretty new over the last three years.”

“After water, feed is the next most important component,” he adds. “That was one of the biggest hurdles the industry had when they first started—how to feed the fish. Let alone how to feed the larvae and the small fish when they were first hatched.”

Describing the advances in nutrition in broad terms, Wilms says: “It’s just how the feed has changed, for instance in the percentage of fat to protein. Every sturgeon farmer will relate to this.”

“We use what’s called ‘no-LAP’ (no-land-animal product) feed from EWOS. It has no poultry or other animal byproducts, just fish such as menhaden or anchovy as its base. It is really a clean, beautiful feed, and the fish love it.

“It also speaks to our demographic,” he continues. “The people we’re selling our caviar to want to know we’re not using something that might have chicken meal or pork blood. That’s important to who we sell to. We like using a feed like that too. It’s clean.”

Latest venture
Aside from successfully getting the sturgeon to spawn, the Bolourchis and their team have transformed Tsar Nicoulai into a fully integrated operation that utilizes all parts of the fish. Three years after acquiring the farm, they built a smoke house to smoke sturgeon meat, now sold at Costco in the United States. Tsar Nicoulai Caviar is sold at Whole Foods and at high-end restaurants in the country. “Every last bit of the fish is completely utilized. It worked out really well,” says Wilms.

Tsar Nicoulai boosted its efforts toward sustainable aquaculture with the installation of an aquaponic system. “We have two greenhouses that went up just over a year ago. We’re using the aquaponics system to filter out our fish water and to use those nutrients to grow butter lettuce,” says Wilms.

Ali adds: “We produce a thousand heads of lettuce a day and are testing many exciting new herbs and microgreens for our client base. You can currently find our lettuce at Bi-Rite markets in San Francisco; they feature local delicious food items. Thankfully our lettuce has been a hit and most importantly each head of lettuce we sell reduces our farm’s discharge and keeps our whole environment working together.”

Another innovation in the works is the installation of solar panels to power the farm. “So the only input to success outside of mother nature’s bounty would be the talented staff that make the farm the award-winning land it is,” says Ali.