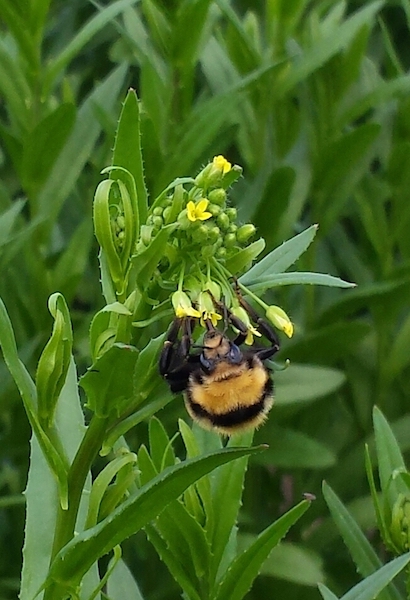 Bee forages on camelina flowers at a nursery in Canada. Mechanically-extracted camelina oil has been found safe for consumption by juvenile salmon and trout With fish oil prices having dropped

One of the primary names in camelina production sees potential in camelina oil for use as ingredient for aquaculture feed but says selling it as a substitute for fish oil “will require the right customers and the right framing.”

Grushcow, CEO of Smart Earth Seeds, says camelina should be appealing because of its ability to replace fish oil, the potential to grow the crop in soil unsuitable for other crops, and camelina’s ideal Omega 3:Omega 6 (N3/N6) ratio in comparison to other substitutes such as canola oil or soybean oil.

But with fish oil prices having dropped, selling the product requires communicating the true value of the product to the right customers, Grushcow believes. “Sustainability often has a price tag associated with it. We don’t see this (camelina oil) as a commodity product – we’re not going to be competing with soy bean and canola because this product has unique aspects to it. If guys really want to support these new emerging feeds they have to have a strategic vision in order to do it. That’s a multi-year process, not just looking at the commodity prices every six months and making your decision based on that.”

In April, the Canadian Food Inspection Agency (CFIA) has approved mechanically-extracted camelina oil for use as a feed ingredient for farmed salmon and trout.