Camelina – a source of oil for fish feed 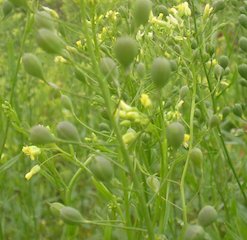 Currently Grown in Europe for more than 3000 years

If the proportion of talks in the fish feeds and nutrition session at Aquaculture Canada 2015, held in Nanaimo, British Columbia earlier this month are an indication, I would consider investing in camelina farming in Canada.

Camelina sativa, is a “new” oil seed being explored as a substitute for fish oils and fish meals in aquaculture feeds. Camelina is actually an “old” crop, native to Europe and central Asia. It is known to have been grown in Europe for more than 3000 years.

Among its other attributes,  the amounts and ratios of omega 3:omega 6 fatty acids make this grain an excellent candidate for fish feeds as well as being superior to other oil seed crops such as canola.  Camelina is high in omega-3 (35%) and omega-6 (25%) with a ratio greater than 1.

Presentations in this session showed results from diet modifications using different proportions of camelina for various species, Atlantic cod, Atlantic salmon and rainbow trout as well as fish of different sizes or stages of development.  Although results varied with species and size of fish tested, the partial replacement of fish oil and meal with camelina oil and meal is promising enough that considerable investment is being made in the development of seed and crop testing in western Canada.

A presentation by Mr. J. Grushcow from Smart Earth Seeds Inc demonstrated the impetus to move forward and begin commercial crop production, in this, the 7th year of camelina field trials for the company.  Camelina shows great promise as it can be produced in marginal lands. Unlike other oil crops, camelina is frost tolerant, drought tolerant, performs well in light soils and requires little fertilizer.  This makes the crop excellent for culture in southern Saskatchewan, southern Alberta and central British Columbia. In addition, the company has been able, through breeding, to increase the size of seed in order to make sowing easier and more effective.  Currently, Smart Earth Seeds is working with Central Plains Federated Coop to contract grow 5000 acres in south west and south central Saskatchewan.

But all was not camelina in this session, a presentation by J. Trushenski from the Centre for Fisheries, Aquaculture and Aquatic Sciences in Carbondale Illinois demonstrated the need for more information on the actual biological requirements for fatty acids by fish.  As often happens in science, a well-designed experiment provided surprising results.  In this case, the substitution of fish oils with other oils from other sources was being tested on striped bass.  Beef tallow was chosen as a negative control, which to the surprise of the researchers produced very similar results to the traditional fish oil based diet. Further work is being undertaken to determine the actual requirements for fatty acids as well as the functional roles of long chained poly unsaturated fatty acids.

For more information on camelina production and its application in fish feeds, see www.smartearthseeds.com.