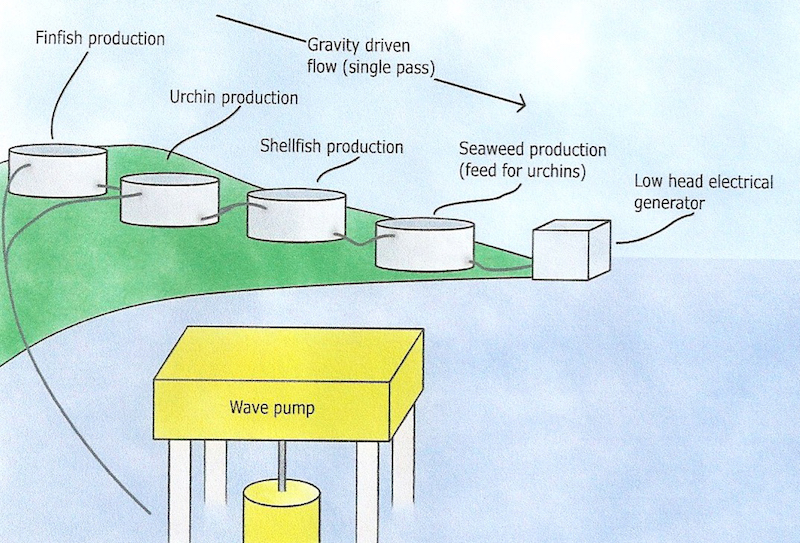 The collapse of the Atlantic cod fishery in the 1990s devastated the economies of many coastal Newfoundland communities. While many have survived through a combination of a much-reduced fishery, government funding, and offshore or out-of-province employment, none of these are sustainable long-term solutions.

Sea-based aquaculture (fish farming in net pens) has provided stable employment in some areas, but only where there are suitable sites with protected, deep inlets with significant tidal or river-current flushing.

Sites that were close to the open fishing grounds with minimal near shore currents were prized by small-boat fishers, but wind and wave protection were a secondary concern. Thus there are many towns and villages that are far from ideal sea-based aquaculture sites.

While land-based aquaculture would be possible in many coastal villages, the profitability of the industry is limited by the cost of pumping water to and through the shore-based infrastructure. Many existing coastal settlements do have an abundance of energy available in ocean waves. The harnessing of this energy to pump water ashore at low cost will enable the development of profitable shore-based aquaculture that will provide sustainable long-term economic activity for these communities.

Shore-based aquaculture has the additional possibility of containing and directing effluent from the production of one species to another that can use it as a feed source (e.g., fish effluent delivered to filter feeders). This effectively “biofilters” the fish production effluent while producing other marketable products (e.g. scallops, seaweeds) at little or no extra cost.

Scientists from the Burin Campus of the College of the North Atlantic (CNA) located in Stephenville, Newfoundland, have been conducting a research project in Lord’s Cove, a small fishing community at the southern end of the Burin Peninsula. The project has the overall goal of developing a sustainable land-based multi-trophic aquaculture system utilizing wave energy as its power source.

Development of the wave-activated pump is occurring concurrently with the design, installation and commissioning of a cascaded pilot-scale Integrated Multi-trophic Aquaculture (IMTA) facility in Lord’s Cove. In this pilot farm, the effluent from the finfish (the only organisms receiving an external feed input) is directed to sea urchin production tanks and finally to algal culture. The algae produced are fed to the urchins, who consume this and any organic sediments coming from the finfish. Suspended organic particulate matter in the urchin effluent will nourish the scallops, and the algae will reduce the dissolved inorganic load before the water is returned to the ocean (Fig. 1). Until the wave pump development is complete, water for the farm is being supplied entirely by electric pumping.

The program is undergoing scale model and sea-based prototype testing of the wave-driven pump. As part of the design process, the wave energy resource and bathymetry at the site were measured and documented. As a result, CNA now operates the Wave Energy Research Centre (Fig. 2), which is now permitted for the testing of wave energy absorbers and similar devices: it includes data acquisition (wave environment, weather and device performance monitoring) as well as the necessary infrastructure to support these studies, and is ready to host and collaborate with other wave energy developers.