Can you keep them on the farm? 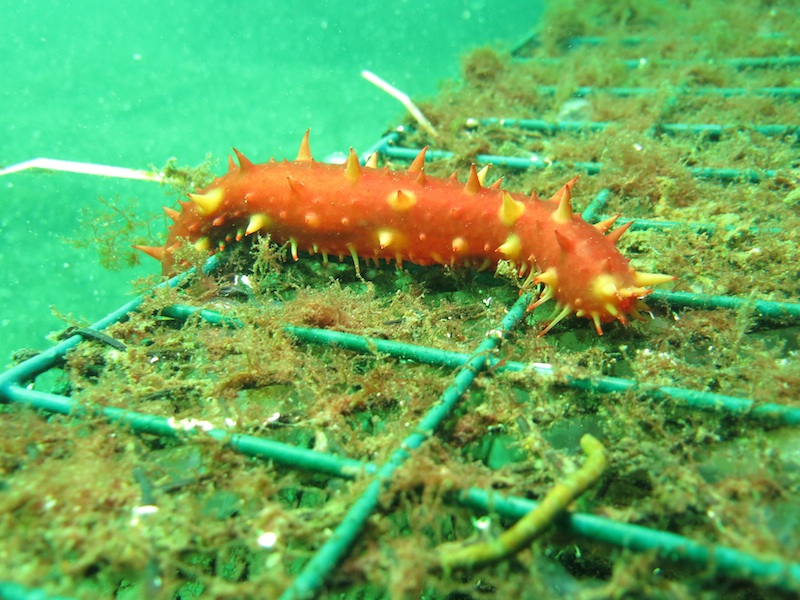 Market demand for sea cucumbers makes them attractive for aquaculture. The challenge could be keeping track of them. They are benthic grazers and research findings are that they can travel up to 40 feet a day in search of food .

The California sea cucumber (Parastichopus californicus) is native to British Columbia and 1,400 tonnes of wild product were harvested from BC waters in 2012 for a wholesale value of $6.5m CAD according to the Seafood Year in Review, BC Ministry of Agriculture. Due to market demands, there is interest in increasing the harvest through aquaculture production or by transplanting wild juveniles to existing shellfish leases.

Research, led by scientist Chris Pearce and biologist Dan Curtis at the Fisheries and Oceans Canada Pacific Biological Station in Nanaimo, BC and undertaken in collaboration with industry and First Nations partners, is providing information to some key questions. Growth and survival of sea cucumbers under existing shellfish leases and movement of sea cucumbers in and out of the leases along the seabed are being examined in several projects undertaken since 2011.

Data from one project has shown that sea cucumbers, held in benthic cages beneath shellfish deep-water long lines, had good survival of greater than 85 percent over their first year of growout and grew best at a density of 1.5 individuals per square meter of cage surface area compared with densities of 6 and 15 individuals per square meter.  At the lower density, it was estimated that a 30g juveniles will reach a harvestable size in 4–10 years depending on size preferences of the market.  Although, Pearce cautions that, “growth is dependent on many other factors, including food availability, which makes it site and season specific.”

Sea cucumbers are benthic grazers and move in search of food. Keeping them on the lease is a concern. Adult cucumbers were monitored for several seasons at a site below an existing oyster farm. According to Pearce “Our lab results have shown that sea cucumbers can travel up to 40 feet or 12 meters per day” and “our field research has proven they are active all year, moving both on and off the lease, though they are more active in the summer.” “We also found greater numbers moved off the lease in the winter, which is likely in response to less food being available on the lease during that time.”

These projects are just the beginning of research needed for the development of sea cucumber culture industry in BC. Pearce states “there are many other questions to be answered such as whether natural barriers can prohibit movement of sea cucumbers off the lease, if artificial containment is needed what configuration is economically feasible, and what is the optimal size for out-planting juveniles for maximum growth?”

For more information on these and other sea cucumber research projects, contact Chris Pearce, Chris.Pearce@dfo-mpo.gc.ca.