Canada is the second country in less than a year to decide that genetically modified salmon is safe to eat and poses no threat to the environment. 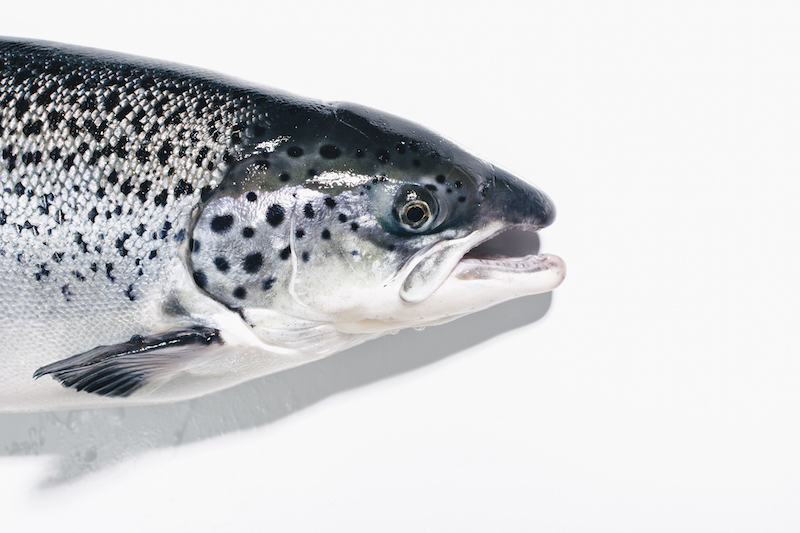 Health Canada announced on May 19 that it has approved genetically modified salmon as safe for consumption Credit: AquaBounty Consumer acceptance of controversial product remains to be seen

“We are pleased to receive the approvals of the various authorities of Canada, which means we can produce, sell and eat our AquAdvantage Salmon in Canada,” Ronald L. Stotish, AquaBounty CEO said after the announcement in May. “We thank the scientists in the Ministries of Health, Food Inspection and Fisheries of the Canadian Government for carrying out their assessments diligently and confirming the safety of our salmon for both the consumer and the environment.”

In what is a highly controversial decision, especially in the traditional salmon farming community and consumer groups, Health Canada, the department of the Canadian government responsible for national public health, ruled that AquaBounty Technologies’ genetically modified (GM) salmon does not pose any risks to food safety. Furthermore, the agency stated that fillets from the salmon are as safe and nutritious as fillets from other farmed salmon.

Called “Frankenfish” by some critics, AquAdvantage salmon is unlikely to find a place in many major US food store chains (see sidebar) despite a similar ruling last year whereby the US Food and Drug Administration (FDA) decided the genetically enhanced fish was safe.

The fish has become a lightning rod for activism against genetically modified organisms. And its path to approval has been a long, hard-fought and contentious battle between politicians and bureaucrats, sparking lawsuits in both countries challenging the production and sale of the fish in North America.

The eggs are hatched at a facility in Bay Fortune in Prince Edward Island (P.E.I.), Canada. They are then exported to Panama, where they’re grown in land-based tanks.

“The campaigns led by various organizations to boycott or label AquAdvantage salmon appear to be driven by reasons other than health or safety, and do not appear to be based upon any known scientific or medical facts,” the company’s communications director, Dave Conley, told Aquaculture North America (ANA). “We remain confident that consumers will find AquAdvantage Salmon to be a desirable and delicious product.”

In a summary of their decision, Health Canada and the Canadian Food Inspection Agency found no difference in the safety or nutritional value of AquaBounty Technologies Inc’s engineered salmon in comparison to other farmed salmon on the market and thus will not be labeled as genetically modified.

“In every other way, the AquAdvantage salmon is identical to other farmed salmon,” said the agency in a statement. “Following this assessment, it was determined that the changes made to the salmon did not pose a greater risk to human health than salmon currently available on the Canadian market.”

The Health Canada decision comes about six months after a suit by environmental groups to stop hatchery production at P.E.I. in federal court failed.

Ever since the FDA approval of the AquAdvantage fish in November 2015, US and Canadian wild fisheries, and environmental groups have been up in arms in criticizing both countries and have even challenged both the US and Canadian governments in court.

The Canadian Aquaculture Industry Alliance (CAIA) did not criticize the government’s decision outright but rather insisted that the organization’s members don’t plan on changing their farming protocols based on the ruling.

“Our farmers have no plans to change farming practices, which already produce the highest quality fresh salmon that is in high demand by consumers in Canada and abroad,” according to a statement provided to Aquaculture North America. “We have confidence in the Health Canada system and the scientific risk assessment process that was conducted. The decision does not impact us. Our members will continue to focus on growing sustainably raised farmed salmon in their natural environment.”

The CAIA added it welcomes the House of Commons Agriculture Committee’s plan to study the labelling issue and looks forward to participating in that process.

“Our members have no intention to farm GMO salmon and change their farming practices,” he said. “We don’t see any market opportunities for our members. As we agree with the government’s effort to label GMO products in the future, we will not be making any changes to our farming protocols either way. We provide sustainably grown salmon to our customers and will continue to do so.”

In the US, the Center for Food Safety argues that the production of the altered fish poses unknown dangers to the nation’s food, health and environment.

In February, after pressure from congress, the FDA backed off its initial decree that the genetically modified salmon did not require special labeling and banned the import of GM salmon until it issues the product labelling guidelines.

In March, environmental and food-safety groups in the US sued the FDA and the US Fish and Wildlife Service, accusing the agencies of not fully considering the genetically altered fish’s potential environmental impact.

On the heels of Canada’s approval of GMO salmon, Friends of the Earth US and a coalition of more than 30 consumer, health, food safety and fishing groups released updated numbers showing that nearly 80 major food retailers have so far committed to not selling genetically engineered salmon, regardless of what government decision makers have to say.

“Amidst irresponsible approvals, the growing number of commitments from retailers demonstrates there is no market for GMO salmon,” said Dana Perls, senior food and technology campaigner with Friends of the Earth. “Retailers and restaurants are wisely listening to their customers and rejecting GMO salmon.”

Albertsons Companies, owner of Albertsons, Safeway, Vons, ACME, Shaw’s and others, stated its commitment to not sell GMO salmon.

“Albertsons Companies, and its family of stores, have no plans to carry GE salmon. The seafood products we offer will continue to be selected consistent with our Responsible Seafood Policy and our partnership with FishWise,” said Albertsons Companies Senior Vice President, Jonathan Mayes in an email.

Despite these hurdles, AquaBounty’s Conley said the company hopes retailers will come around. “We hope retailers will resist unfair and inappropriate pressure from special interest groups to deny consumers the opportunity to try our product for themselves,” he added.