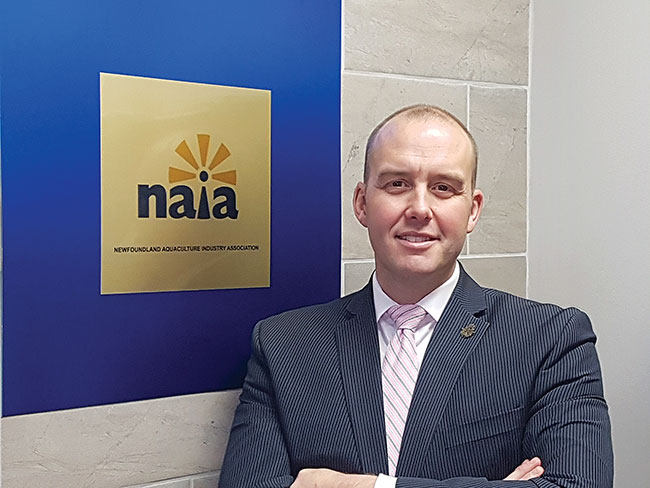 An aquaculture industry in transition, one brimming with game-changing innovations, will greet participants at what is touted to be the largest edition of the Cold Harvest Conference and Trade Show from September 24-26.

A beacon of Hope
Newfoundland’s rising stature as farmed salmon producer does not surprise Mark Lane, executive director of the Newfoundland Aquaculture Industry Association (NAIA), the event organizer. While other salmon farming locations, such as British Columbia and Washington State, are facing intense scrutiny, Newfoundland enjoys support from the provincial government and the local population.

“Eighty-percent of the Newfoundland population support aquaculture. Fourteen-percent do not support it and the rest are undecided, but there’s appetite from the people because of the economic benefits, the long-term, meaningful, well-paying jobs that the industry offers. And because the people have embraced aquaculture, so too have our politicians,” says Lane, citing results of a 2019 survey. The widespread support among the local population–86 percent–is made even more remarkable by the fact that a similar survey conducted a year before showed that only 56 percent either support or strongly support the industry.

Lane says given the province’s 29,000 kilometers of coastline and with roughly 90 percent of Newfoundlanders living by coastal waters, “we have a historical attachment to the sea, through harvesting the sea via traditional wild capture fisheries,” he says.

Cod drying next to traps in Bonavista, NL, Canada. Newfoundlanders saw aquaculture as ‘beacon of hope’ after the cod fishery was shut down in July 1992 Credit: Adobe Stock

“We’ve got the real estate, public support for salmon farming, and we’ve got political support. If you look back to 1992, rural coastal communities in Newfoundland were decimated with the closure of the cod fishery. Hundreds of thousands of Newfoundlanders have faced a very morbid future. They now see aquaculture as a beacon of hope.”

He continues: “Municipality leaders often reach out to me, asking, ‘how do I get aquaculture into my community?’ We’ve seen the impacts we heard you speak about, the social economic imprint that we’re leaving in communities where we’re operating.’ People want a piece of that pie.”

Grand Falls-Windsor, a coastal town of roughly 15,000 people, is one of those municipalities. It envisions itself becoming an aquaculture hub, much like Campbell River is to British Columbia’s farmed salmon industry. “This is a community in central Newfoundland that has no ocean. But they were really setting themselves up to be the Campbell River of Newfoundland. What I mean by that is that because of the services that they have for families, they feel that they are the best place to host the headquarters for these larger companies or service supply companies,” says Lane.

Gael Force Group of Scotland, a provider of industry equipment and services, has already set up an office in Grand Falls-Windsor. Lane predicts more investors are coming, not only to the town, but to the province at large. In July, 11 Norwegian companies looking to partner with local salmon aquaculture companies visited salmon farms in Newfoundland. “There’s a couple more salmon companies, which will be nameless at this point, who are interested in investing in NL,” he says.

Growth forecasts
Newfoundland and Labrador’s aquaculture industry is worth over $200 million annually to the provincial economy. Its value is bound to grow as the industry flourishes further. Under “The Way Forward and the Aquaculture Sector Work Plan,” both industry and government have committed to double commercial salmon production from 2017 figures to 50,000 MT by 2030, and commercial mussel production to 10,750 MT. The number of year-round jobs supported by aquaculture will more than double, from 1,000 to 2,100, it predicts.

The Mckinsey Global Institute forecasts an even bigger growth for the industry. The think-tank predicts that by 2030, NL’s aquaculture sector could be producing more than five times current volumes, exceeding 100,000 metric tons annually. Fully realized, increased production of sustainably farmed seafood, coupled with a substantially more robust and integrated supply and services network through the value-chain, could contribute up to $600 million in GDP and generate more than 7,000 additional jobs by 2030, it said.

Record-breaking numbers at the upcoming edition of Cold Harvest is an endorsement of the province’s growing stature in the industry, Lane believes. As of July, 300 people have already registered as delegates, a figure that’s “about 500 percent higher than what it was this time last year,” he says. He anticipates between 500-600 attendees.

The number of exhibitors is will also be a new record. “We just sold out at 52 booths. This time last year we had roughly around 10 trade show booths sold.” He said negotiations are ongoing with the venue for an additional area to accommodate more exhibitors.

“We’re trying to attract as many people as we can to assist with growing the industry. It will be the best Cold Harvest ever,” he says.