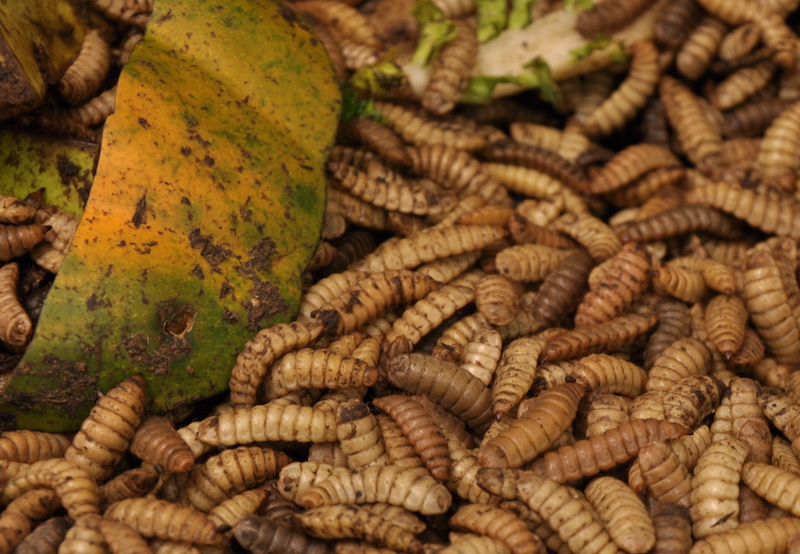 Enterra Feed Corporation, based in Langley, British Columbia, has received approval from the Canadian Food Inspection Agency (CFIA) to sell its whole dried black soldier fly larvae as a feed ingredient for salmonids, including farmed salmon, trout and arctic char.

The approval makes the company the first to market and sell the product to aquaculture feed manufacturers in Canada. This is the first Canadian approval of an insect-based aquaculture feed ingredient, and follows the CFIA’s approval using this same product in feed for chicken broilers last year, the company said in a statement. Enterra received a similar US approval for use in salmonid feeds in 2016.

Canada is the fourth-largest producer of farmed salmon in the world, according to the Department of Fisheries and Oceans. In 2015 the farm gate value – the net value when it leaves the farm – of salmon and trout in Canada was $850 million.

“Aquaculture feed producers have been keenly awaiting this approval and we look forward to supplying their needs immediately,” said Andrew Vickerson, Chief Technology Officer, Enterra. “Fish eat insects in their natural environment and our product is a healthy, digestible and renewable source of protein and fat that can replace less sustainable ingredients, including fish meal and soybean meal.”

Production of fishmeal, which is a standard aquaculture feed ingredient, can deplete wild ocean fish stocks and is subject to substantial price fluctuations. Soybean meal requires significant agricultural inputs that could otherwise be used more efficiently to grow food for people.

“Insects are a natural source of digestible protein and fat for fish, including salmon and trout,” said Dr Brad Hicks, a veterinarian and partner in Taplow Feeds, an aquaculture feed manufacturer. “This product will contribute to healthy, active fish and is a great alternative feed ingredient.”

Enterra says its insect-based feed ingredients are sustainably produced with a long-term price guarantee. The company collects pre-consumer recycled food — deemed as waste product — from farms, grocery stores and food producers and feeds it to black soldier fly larvae, which grow rapidly under controlled conditions. Once mature, the larvae are processed into renewable feed ingredients in the form of Whole Dried Black Soldier Fly Larvae, Enterra Meal (made of de-fatted larvae) and Enterra Oil (extracted from the larvae).

Enterra says its sales have tripled each year since its Langley farm opened in 2014. Through its proprietary process, Enterra has converted tens of thousands of metric tonnes of pre-consumer waste food into sustainable feed ingredients for its growing customer base. The company plans to expand its existing facility and establish additional farms in Canada and the US to meet the increased customer demand anticipated to result from future US and Canadian approvals of a complementary feed product, Enterra Meal. These approvals are expected in 2017.