Peter Chettleburgh, the founder and former owner of Aquaculture North America (ANA), and fellow industry veteran, aquaculture research scientist Cyr Couturier, were honored by the Aquaculture Association of Canada (AAC) at its annual conference for their contributions to the aquaculture industry. 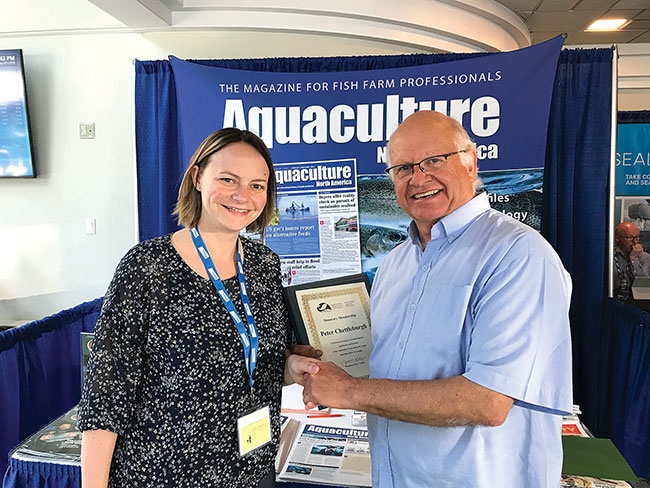 Chettleburgh and Couturier were awarded honorary memberships to the AAC.

Chettleburgh was ANA publisher from 1985 to 2017. “Peter has flown the flag for Canadian aquaculture publishing, providing fish farmers in the region with Aquaculture North America, and fish hatchery managers in over 90 countries with Hatchery International,” said Joanne Liutkus, outgoing AAC president.

“Sticking closely to the publishing formula that made Peter so successful, both publications are now under the new ownership of Annex Business Media and remain the go-to industry news resources for aquaculture professionals,” Liutkus added.

Chettleburgh traced his start in publishing to AAC.  “The farmed salmon industry was growing very quickly in 1984, ‘85, ‘86. It was quite remarkable. So I knew about aquaculture when I got approached to take over the publishing of AAC’s official organ. Life is so often that way; I just happened to be at the right place,” he says.

He transformed AAC’s official bulletin into a national industry publication and renamed it Canadian Aquaculture.
“I thank the AAC for the beginning of my career. That AAC magazine became Northern Aquaculture from 1991 to 2009, and ultimately Aquaculture North America,” said Chettleburgh.

Chettleburgh was also instrumental in the launch of RASTECH, a new international magazine dedicated to  recirculating aquaculture systems.

Couturier: leader and mentor
Cyr Couturier, chair of Aquaculture Programs at the Marine Institute of Memorial University of Newfoundland, was fêted by the AAC for becoming a pillar of the organization since its early days. He holds the distinction of being the first ever student elected to the board of AAC in 1990, and for the multiple leadership roles he held over the past 27 years in the association, including as president-elect for four terms.

“Cyr has encouraged and found ways to get as many of his former and current students as possible to attend Aquaculture Canada and make it affordable to them,” Liutkus said.

“Personally, Cyr has been mentor to myself and many students from the Marine Institute at Memorial University. He inspired our continued participation in the AAC. He’s done the same for countless other students since the 1990s. He has been a major supporter and advocate for the success of AAC and students, and his vast array of volunteering speaks to this. We cannot think of anyone else more deserving of this award,” she added.