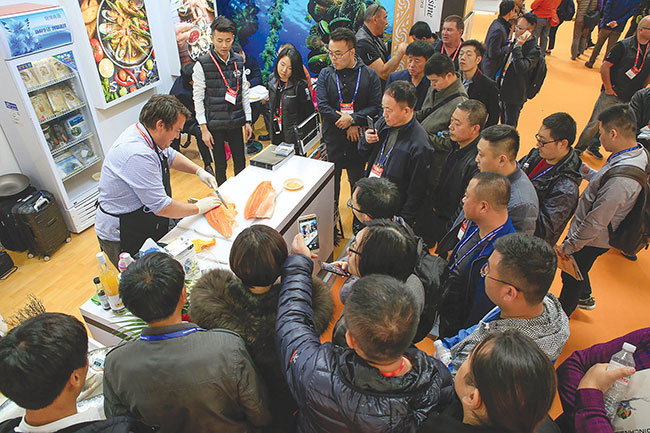 Demand for Canadian seafood in the world’s most populous country has been growing in recent years and 2019 was no exception.

Some discussions at the seminars held during the event centered around the ongoing trade dispute between China and the United States, and that American companies sourcing seafood from China are moving out into neighbouring countries, like Vietnam, for their processing requirements to mitigate huge duties on imported seafood products to the US.

“This may augur well for Canadian producers once the current trade agreement is ratified with the US, and that is expected soon,” said Cyr Couturier, Aquaculture Scientist at the Marine Institute of Memorial University, who attended the event.

Couturier observed that Canadian seafood of the farmed and wild varieties continue to be in great demand in the rest of Asia. “Hopefully we can continue to supply more of it to these newer markets.  The demand always exceeds the supply of farmed seafood, salmon in particular, so there is a glaring need to expand Canadian production to access these newer market opportunities,” he said.

Exports of Canadian seafood to China saw the largest growth (25 percent) at $194 million in 2017, followed by Japan (13 percent) at $40 million, according to latest data available from Fisheries and Oceans Canada (DFO). Overall seafood exports in 2017 totalled $6.9 billion, of which farmed Atlantic salmon accounted for $909 million.

The Canadian contingent at the China Fisheries & Seafood Expo (CFSE) was the largest group of exhibitors from outside China. Farmed seafood companies, among them Cooke Aquaculture and Fanny Bay Oysters, accounted for approximately a quarter of the floor space in the Canadian pavilion. Dozens of farmed seafood sales staff represented more than 10 Canadian farmed seafood categories in attendance.

CFSE is now the largest seafood trade show in the world, surpassing Seafood Expo North America (SENA) in Boston and Seafood Expo Global (SEG) in Europe held each year. So much so, that the show will move in 2020 to a new venue in the city of Qingdao with 140,000 square meters of floor space to accommodate the 1,600 exhibitors and 40,000-plus visitors expected to attend.