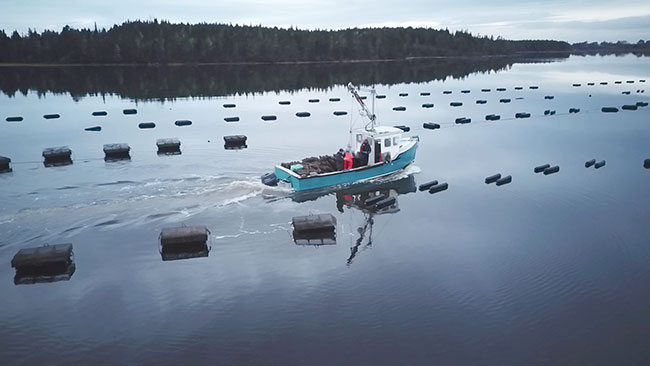 Argyle currently has five sites with oyster farming activity by two companies. The town hopes to increase that number with the proposed Aquaculture Development Area Credit: Municipality of Argyle

The town of Argyle in Nova Scotia, Canada, is planning to build a “business park on the sea,” as part of a broader effort to promote oyster aquaculture in its waters.

Acquiring numerous approvals from more than one permitting agency is typical for potential aquaculture lessees anywhere, but under the proposed Aquaculture Development Area (ADA), the sites identified will have already undergone environmental impact assessment, a review by multiple provincial and federal departments, and consultation with stakeholders.

“As Council, we focus on the assets we have in the region, which is ideal conditions for oyster and other aquaculture growth. Our interest in establishing an ADA is to remove some of the barriers of entry in this complex market, supporting new and existing companies in this industry and providing more opportunities for our residents to work, live and play here,” Argyle Warden Danny Muise said.

Charlene LeBlanc, Argyle’s community development officer, said the potential operator wishing to use the space will still have to apply for an aquaculture license and lease from the province.

She noted however that the permitting process would be “much faster and less onerous because the area has already gone through a rigorous assessment for that activity.”

“Biophysical and oceanographic data is available, meaning you will know the average phytoplankton, pH, temperature and salinity, etc of your site. You are aware of what the bottom looks like, the current, proximity to wharves, and three-phase power, where the navigation routes are, and the proximity to lobster fishing gear. The concept is much like shopping for a lot in a business park on land, except it is on water.”

The ADA has yet to be approved but the interest is high, added LeBlanc. “We have been getting calls everyday since we announced it.”

Argyle currently has five sites with oyster farming activity by two companies, and another company soon to receive three leases. Under the proposed ADA, 19 sites have so far been identified. The leases will vary in size, ranging from 4 to 20 hectares.

“Oyster aquaculture is environmentally friendly, and has always been very well received. The lobster fishery has an important presence in our municipality and we value their input and want to avoid their lucrative fishing grounds. Recreational boater routes have also been considered with every site chosen,” LeBlanc said.