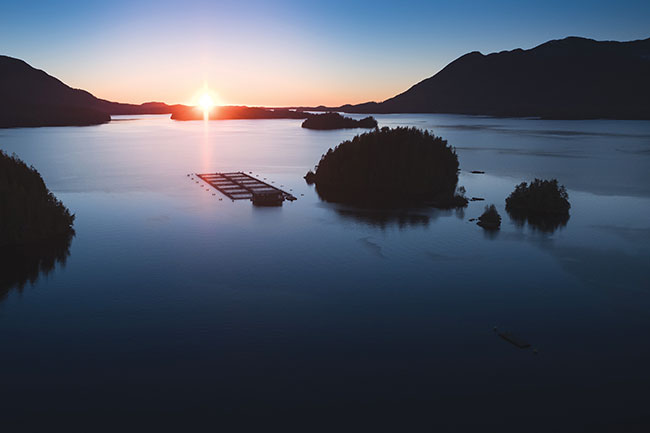 A new empathy for the experience of First Nations emerged for Cermaq Canada Managing Director David Kiemele, and that seems to have set the tone, as Cermaq and Ahousaht Nation worked together to renew a protocol agreement this spring.

“I don’t pretend to understand completely, but it’s given me a bit of insight as to how potentially some Indigenous nations have felt in previous years if they weren’t consulted,” he said. “Historically, that’s happened more times than not.”

The new protocol agreement announced in late May “brings focus to the priorities of the Nation” and provides a “roadmap for how Cermaq will farm in their territory” for the next five years.

With regards to sea lice management for example, “we asked them to share with us what they thought was adequate,” said Kiemele. The resulting protocol cut the current federal threshold in half.  “It is a challenging standard, absolutely. But doing everything we can to achieve it addresses the concern of the nation. And so that’s what we need to do,” he said.

The agreement also calls out the pursuit of further innovation, such as a semi-closed containment system (SCCS).

“It definitely has the interest of the leadership of the nation,” said Kiemele, announcing that Cermaq Canada is going to start a second trial in a few months.

There is also some “exciting preliminary work” on potential electrification of some of these sites, which require more energy for fish life support. With good prospects for federal funding for clean energy production, such a project could also bring hydro power to some remote areas and homes, in addition to the enablement of technology to counter sea lice.

“Just last week the chief was out walking some of the territory with our staff and consultants to see if we can run hydro-power to the site,” said Kiemele.

And here lies the key contrast: the collaboration. In fact, work on the new protocol took place for close to two and a half years. Hasheukumiss, Richard George, acting Ahousaht Tyee Ha’wiih (head chief) for his father Maquinna, was new to this role, and “wanted to take his time, and, thankfully, do his homework as to what exactly he was agreeing to,” said Kiemele.

Moreover, when Cermaq came to the table, it did not automatically assume that the nation would approve an extension. “There’s been a lot of conflict in the industry over the years because there hasn’t been that discussion or that table set.”

The new protocol also stipulates that sampling results are shared with the nation as part of the ongoing process.

Ahousaht representatives come to the Cermaq farms, observing the farmers and the fish and operations like mechanical delousing.

“They see what we do with their own eyes, instead of reading some posts by an activist somewhere,” said Kiemele. “And this is the way of doing business now and in the future,” he said.