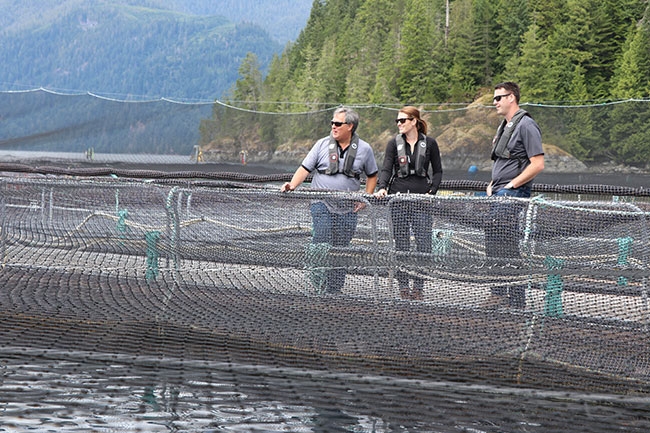 Poseidon Ocean Systems of Campbell River, British Columbia, will install its new cage system design for the first time at Cermaq Canada’s Fortune Channel site.  It will be in the water in August and stocked with Atlantic salmon in November, says David Kiemele, managing director of Cermaq Canada. “I’m excited to be buying from a local company,” he adds.

Substituting rounded, continuous pipe for the traditionally used rectangular floating billets reduces the impact of wave and current action on the cage, according to Poseidon. For farming operations that prefer steel platforms, this design gives them the flexibility to move into more extreme waters.

A second new design feature is that power and feed lines, as well as air hoses, run underneath the deck instead of on top of it.  Clearing the walkways is a plus for workplace safety and makes it easier to accommodate different types of equipment, like forklifts, on deck.

The newly conceived system is engineered so that nets attach to brackets built into the steel frame underneath the deck, rather than the inside rails of the cage.  This disperses the weight of the nets evenly around the entire cage and helps thwart an inward pull which would create unwanted stress on the cage structure.

Poseidon Ocean Systems was founded by Matt Clarke and his wife, Heather, just over three years ago.  The company won the 2018 awards for Excellence in Innovation and Technology, as well as New Business of the Year from the Campbell River Chamber of Commerce.

Prior to Poseidon, Matt Clarke was a marine engineer manager at Marine Harvest (now Mowi) for four years. He has had hands-on experience retrofitting older cage systems for what goes on at a farm today.  In this new design, Clarke was able to anticipate a lot of details, down to creating uniformly spaced sockets into which predator net support frames can be placed.

“So many things that add up to a really big change” is how Clarke describes the system.

Poseidon had worked with Cermaq on other projects prior to the Trident system, according to Kiemele.  This new system has been “engineered to a very high level,” he says. Clarke adds that it is “backward-compatible”—engineered to take advantage of current investments, but able to integrate future features.