Changing the face of aquaculture

Ingenious companies around the world are accelerating innovations at an unprecedented pace to make fish farming more sustainable. One of them is AgriMarine TechnoIogies Inc (ATI), a developer of marine aquaculture containment systems. ATI is a subsidiary of AgriMarine Holdings Inc, a portfolio company of Toronto-based Dundee Corporation.

The British Columbia company is busier than usual these days, says AgriMarine Director Sean Wilton. “We have lately been working on a lot of closed containment systems because it’s starting to look like there’s a sweet spot in the industry where you get a crossover of functional benefits with cost. The cost of (floating) containment is obviously higher than net pens but lower than in land-based,” he told participants at the Aquaculture Innovation Workshop in November.

AgriMarine has been at the forefront of salmonid closed containment aquaculture for nearly two decades and pioneered the development of marine-grade floating closed containment systems for over 10 years.         In 2014, it formed ATI to focus on delivering its market-ready sustainable technology solutions to clients around the world.

ATI has less than 10 employees, which is relatively small in the world of technology innovators. But while the competition has started getting bigger — in both the size of their deployed systems and their engineering and R&D budgets — Wilton believes “bigger is not always better.”

The greatest challenge for any smaller innovator, he says, is to stay relevant once they have proven the value of their technology to larger players in the industry.

“We are meeting this challenge by leveraging both the depth of our practical experience and our flexibility and responsiveness that we enjoy being a smaller private company,” Wilton says.

“Our floating closed containment technologies, both tanks and raceways, address all of these issues in the same fundamental manner. We use solid or impermeable wall structures in the rearing containment vessels to isolate the husbandry environment from the ambient surface-water conditions, and draw cleaner, cooler water largely free of algae and sea lice from depth to supply the fish with as close to ideal culture conditions as are available,” he told Aquaculture North America (ANA).

In 2012, AgriMarine acquired West Coast Fishculture (Lois Lake) Ltd, a finfish farm in Powell River, BC, which produces 1,200 MT of steelhead annually. Starting out as a net-pen operation, it added closed containment because high water temperatures in the summer led to high mortality rates. There are currently six tanks deployed, displacing approximately 18,000 cubic meters of water and accounts for three quarters of the farm's standing biomass. Plans are underway to transition fully to closed containment.

AgriMarine’s floating, semi-closed containment systems optimize the rearing environment for the steelhead, says Wilton. “Having our own farm and our own engineering group in-house allows us to learn and live what it takes to use floating closed containment in a real-world commercial environment. We have direct feedback from end users to designers and back again, and this is giving us a very rapidly developing practical knowledge base of the technology and its use,” he says.

He adds that sea lice are not an issue in the steelhead farm. “There are no sea lice in the lake. Our challenge is that it gets too warm in the summer. Key for us is the ability to isolate culture temperature from the ambient water around us so we bring cooler water up from depth of about 30 meters below our tanks.”

This allows water in the tank to be maintained at 13 to 14˚C whereas the surface water temperature is as high as 26.5 ˚C outside the tanks. As the farm transitions to all contained systems, the tanks are operated alongside nets, allowing them to collect comparative data. Traditionally, net pens in freshwater lakes see marked spikes in mortality levels during the summer. In contrast, AgriMarine's tanks and raceways have seen greatly reduced mortality rates that are in line with industry norms at saltwater marine sites.

Two tanks were delivered to a Norwegian specialist post-smolt producer over 2016/2017. The client has completed two crop cycles and reports excellent health and accelerated growth with both cohorts reaching target weight seven weeks ahead of schedule.

The company's tanks are certified to the Norwegian NS9415:2009 construction standard — a very rigorous set of technical standards and quality control procedures enforced for all marine equipment in Norway.

“We believe we were first to achieve NS9415 certification for our floating tank technology two years ago and in some ways are still leading as we have more commercial production cycles through our technology than anyone we know of,” Wilton added.

"Combined with government incentives for Green Sites and other R&D support measures in other countries, some competitors have taken the lead in deployment footprint and we have to keep innovating to make sure those large well-funded engineering teams don’t catch up or pass us technologically as well,” he says. 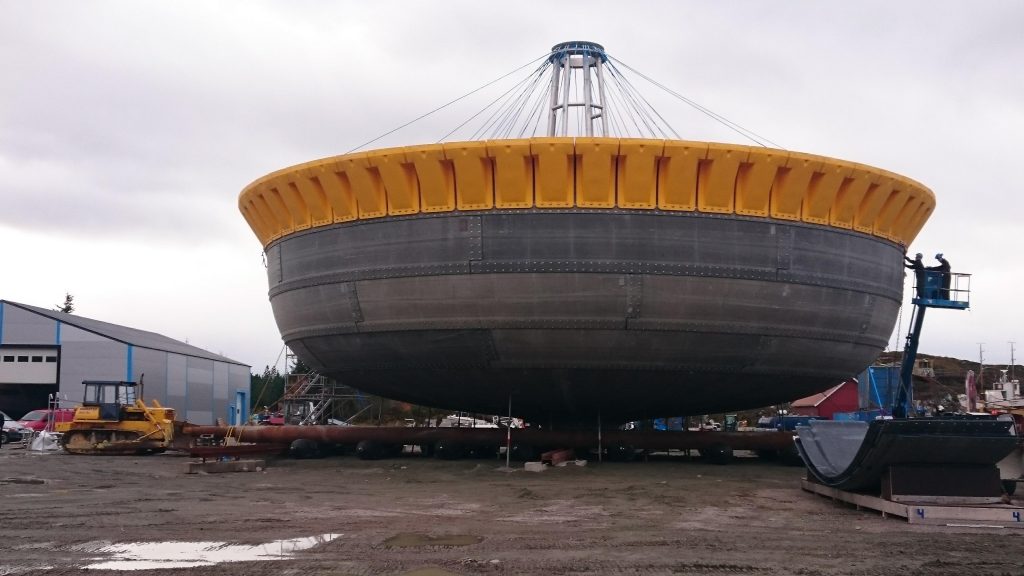 The first of its kind in Norway
Print this page