New research on how aquaculture can adapt to climate change 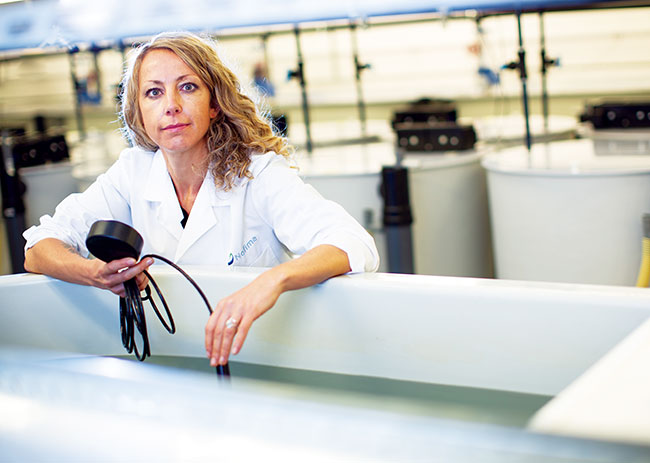 In the real world, climate stressors do not occur in isolation. Yet, much research has focused on the impact of single factors, like temperature.

Long-time collaborators Dr. Elisabeth Ytteborg of Nofima in Norway and Dr. Lynne Falconer of the University of Stirling in Scotland took on the challenge to delve into the complexity of climate change in aquaculture. The result is a new paper offering a targeted and detailed analysis of climate change impacts, risk assessments, and adaptation planning.

Its title feels like a call-to-action, “Insight into real-world complexities is required to enable effective response from the aquaculture sector to climate change.”

The research, some three years in the making, brought together climatologists, modelers, biologists, and industry stakeholders. Its publication in PLOS CLIMATE last March comes at a time when climate events have already affected aquaculture production worldwide—prawns in Bangladesh, mussels in Greece, and salmon in Canada.

“Climate change may seem like a distant horizon, but impacts are already occurring. To adapt, producers need knowledge. This paper brings forth key research findings in ways that we hope are very accessible and customizable,” said Ytteborg.

Focusing on salmon aquaculture in Norway, the researchers identified seven key stressors: sea level rise, storms, temperature (air, sea), extreme temperatures and heatwaves, ocean acidification, deoxygenation, and precipitation. Then, they set a broad scope for which they would examine climate impact on salmon aquaculture—not only the grow-out phase, for example, but the entire spectrum of production stages (breeding and hatchery, juvenile, grow-out, and processing), as well as the wider supply chain (feed and transport).

With such an ambitious charge, the team pinned down the links between climate stressors and their impacts through an extensive review of research literature and industry news.

An important finding was that almost all impacts were linked to multiple climate stressors.

“Climate stressors are interlinked and you have to consider all of them,” said Ytteborg, who has authored 57 publications at Nofima, a leading food research institute based in Norway.

Asked for an example of this multifactorial impact, she points to salmon mortality events in Atlantic Canada.

“From research trials, we know that salmon can withstand temperatures up to 23 C,” she said. “But, if you take into account the complexities of the environment as well as real-life activities at the farm, high temperature alone is not what the fish actually experience.

“In Canada, the fish had been handled for sea lice treatments three weeks before, then the temperature increased and the oxygen also dropped at the same time. So, the fish started actually to die at only 17 C. These are the real-world complexities of multiple stressors.”

In the published research, the comprehensive analysis of these stressors yielded not only an in-depth discussion but also a matrix that readers can download and open in Excel.

“We are hoping that this spreadsheet will be used in discussions between researchers and industry as they prioritize which projects to pursue,” said Ytteborg.

But adapting in the real world will bring challenges. “Not all adaptation responses are suitable at all locations, and there may be interactions between them that influence how effective they are,” added Lynne Falconer, who is a research fellow at the Institute of Aquaculture at the University of Stirling.

“Industry will need to make decisions on what to prioritize. Some responses will be farm-specific, while others will be industry level,” she said.

Examples of adaptation responses include technology that is already available, such as oxygen pumps, as well as longer-term strategies.

“In addition to what we identify in the paper, there are also transformative changes such as species diversification,” she noted.

The paper can also serve as an organizing tool or model for thinking about climate impact for other species, production systems, and environments. The approach could be applied to other sectors, from mussel farming in New Zealand to land-based finfish production in California.

The researchers also stress that adaptation is a process, and the study is a starting-point. “One of the key points in the paper is to embrace knowledge gaps rather than ignore them. Adaptation plans should also acknowledge where there are uncertainties and a lack of knowledge,” Ytteborg said.

While knowledge gaps exist and real-world complexities present challenges, research like what Ytteborg and Falconer initiated is moving aquaculture forward in its ability to contribute to the global food supply.