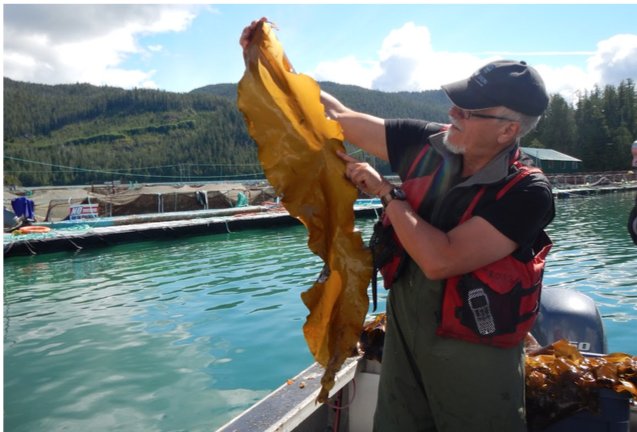 Results from the second year of a kelp-growing study by partners BC Salmon Farmers Association and North Island College (NIC) show good potential in growing seaweed within salmon farm tenures.

Farm tenures are very large (20 to 30 hectares) and while the cage array is small in relation to the allocated space, this area is needed to accommodate the anchoring system, Cross explains.  “So we have a lot of space within the tenure that could be potentially developed for additional species.”

In 2015, the US-based Ocean Sciences National Center for Marine Algae and Microbiota estimated the global value of primary and intermediate seaweed products at $10 billion a year.

“The whole world does it (grows seaweed),” says Cross.  “I believe it is the number one species in aquaculture on the planet.  Asia harvests 7 million metric tons of sea plants a year.  But we don’t do it.” That may change, considering the positive results Cross’ team has had growing sugar kelp Saccharina latissima on salmon farms over the last two years.

The study is looking at the technical aspects of growing kelp, the socio economic potential of growing a second species at salmon farms and the market potential and business case for the seaweed.  Funding is a five-year, $-million Natural Sciences and Engineering Research Council of Canada grant and operated in partnership with the BC Salmon Farmers Association members Cermaq Canada, Grieg Seafood and Creative Salmon.

Broad frond kelp is indigenous to northern latitudes. “Every region has a different species,” says Cross.  “It grows in the lower intertidal zone up to about 15 meters in depth.”

“We generate the seeded lines in the lab,” explains Cross.  Mature plants ready with reproductive spores are induced to release the spores into an aquarium full of sterile seawater.  A 30-cm-tall, two-inch PVC pipe is closely wrapped with sterile string and placed in the aquarium.   A bubbler keeps the spores in suspension and full spectrum lights and suspended nutrients create an environment that eventually leads the spores to settle.

“They would settle on something like a rock in nature,” Cross points out. “But in the aquarium the only option is the string on the PVC.”   They attach as microscopic spores and start to grow as tiny plants.  “When you look at it around Christmas the whole unit is brown and fuzzy,” Cross adds.  “It looks foul but that is actually the plants starting to grow on the string.”

The twine is carefully unwrapped and re-wrapped onto a 0.25-inch poly line, giving about 50 meters of line with seeded kelp attached.  “Those lines can be put full length in the field for commercial production,” Cross says.  “For our studies we cut them into five lengths.”

The first year of the study (2015) looked at the growth of kelp seeded on lines in an array around one farm site.  “That was awesome,” says Cross.  “It worked really well. We could show at that site we were getting 40- to 50-percent growth really close to the farm and that tapered off as the nutrients were diluted downstream.”  He says the nutrient signal was detectable up to 150 meters from the cages.

In January 2016, 31 farm sites around Vancouver Island each received three vertical six-meter seeded lines.  The best growth for the kelp occurs in the spring and the lines were pulled for analysis in June.  “You can seed out at any time of the year, but during the summer there are lots of invertebrates that will eat small kelp.  They grow extremely fast from March to June,” says Cross.

The study measured growth performance (frond width/length, color and biomass) for three-depth ranges on each line 0-2, 2-4 and 4-6 meters.  Performance over the spring growing season ranged from 10 cm at one site with the poorest conditions, to 298 cm at the good performing sites.

They are looking at the data now, but Cross says a good site would have fairly good water flow and some up-welling so there would be natural nutrient mixes.  Kelp likes high salinity and cooler to moderate temperatures of 10-12 C.

“We will marry the performance data with the salmon farmer’s water quality data base and correlate it,” says Cross.  “We picked a range of salmon sites to test, as salmon are more tolerant to a range of salinity than kelp. Salmon can tolerate mid 20s parts per thousand while kelp like 30-32.   If you grow kelp in brackish water you can’t do it too deep.”

Tissue samples were submitted for micronutrient analysis as well as carbohydrate, protein and water content.  “This kelp concentrates iodine,” says Cross.  “So it is a great source.

For the next phase, starting in January 2017, the team will test a focused commercial scale production at one or two of the best sites.  Tissue analysis and growth performance will be completed on a 14-day sampling schedule from May through July.  “We will be looking at how much we could produce and what kind of markets are within North America,” says Cross.  “We want to now if this can create a secondary industry with jobs and socio-economic impact, so a business case study is in the works.”

Salmon farmers don’t want to go into the business of kelp farming, Cross points out.  But they will certainly be open to co-culture opportunities at their sites.”

“I am happy with the positive media this project gets,” says Cross.   “As far as mitigation goes, you wouldn’t be able to measure impact on nutrient levels unless you had full commercial level of production.”

“The fact that we can detect the nutrients and actually sequester some of that nitrogen and turn it into kelp means that we are actually pulling it out of the water so it’s a scale up after that,” Cross says.  “Because kelp produces oxygen we are looking at whether there are any other benefits such as helping with season fluctuations in dissolved oxygen.”

“We have a coast that could really crank it out.”