“Aquaculture water is a very dynamic environment,” says KC Hosler, project delivery manager for Pentair, from his office in Nanaimo, BC. 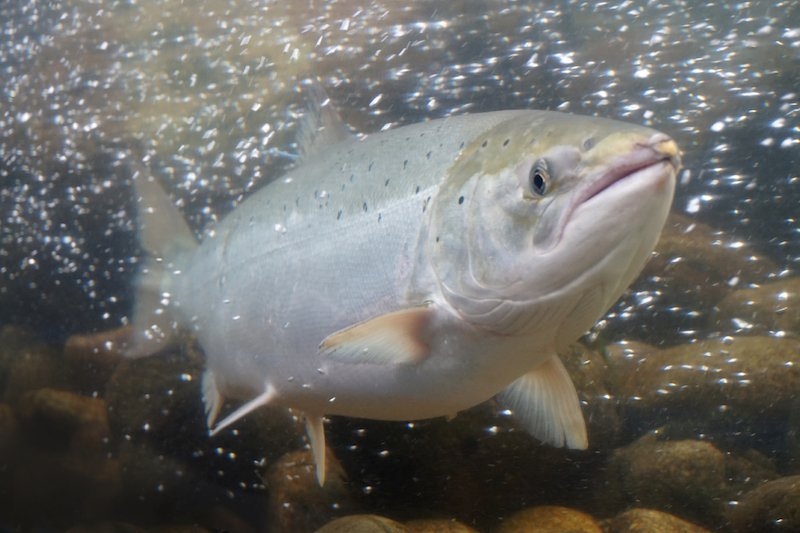 Pentair’s sea pen aeration and sea pen oxygenation systems use similar equipment to inject gases into the water, yet they have different applications, to solve different challenges. Hosler outlined two ocean conditions — phytoplankton blooms and low-oxygen events — and explained how the systems can help to mitigate them.

“When net pen operations use aeration systems in BC, it’s primarily for plankton mitigation,” explains Hosler. Plankton, or algae blooms, cause fish health issues, can create a low-oxygen situation, or in extreme cases, can even be toxic to the fish. “Aeration is creating a few different effects in the water that are beneficial for the fish,” he says.

Air bubbles rising from the diffusers help to decrease the density of the water above and that induces a vertical flow of water from depth to draw in water that is of better quality. “That water might be free of plankton, it might be higher in oxygen, or potentially a different temperature,” says Hosler.

As the bubbles rise they bloom up and that vertical energy is converted into an outward radiating flow, says Hosler. “The bubbles spill out in all directions and create an outward flow at the surface that is pushing water away from that air source,” he says. This helps push away from the pen plankton that may be at the surface.”

“By introducing air bubbles into the water you are also creating gas transfer,” says Hosler. “Some of the oxygen that is contained in that air is absorbed into the water in the pen, helping to boost the oxygen level or make more oxygen available to the fish.”

An aeration system is centered on an air supply of one or more compressors and an accumulator tank. That air is distributed to all points of use by piping systems. There are flow control panels at the pens themselves that distribute the air to diffusers. “The diffusers are deployed on a grid pattern to equal area coverage and we select the diffuser locations to suit the conditions at a site including pen size, water depth and number of fish in the water,” Hosler explains.

The compressors can be rented from local suppliers Hosler points out. “Many of our customers prefer to use that as an operational expense as opposed to a capital expense,” he says. “The maintenance and service of those compressors then falls to the vendor who is supplying them.”

The system again distributes oxygen to each of the pens using a flow control panel and deploying a different type of diffuser, again on a grid pattern, to introduce fine bubbles of oxygen into the water at a given depth.

“When we diffuse the oxygen into the water it is usually at much lower volume than aeration,” Hosler points out. The bubbles are much smaller to create lots of gas-to-liquid interface.

Hosler says there is more complexity with oxygen equipment. “Oxygen generation systems usually require a diesel generator to supply power and usually need to be housed in a separate building, so there is much more need for up-front design to implement them.”

Cermaq Canada operates 28 farm sites around Vancouver Island BC. Brock Thomson, regional production and special projects manager, says they use a variety of technologies to manage water conditions including aeration and oxygen systems and feed management, during plankton and low-oxygen conditions.

“Depending on the severity of the situation, aeration or oxygenation systems have proven to improve the local environment and fish behavior,” says Thomson. “Across our facilities, aeration systems are deemed a seasonal necessity.”

Thomson says low-oxygen levels have become a “regular production challenge.” “Low DO levels are also a seasonal issue at many of our locations,” he says. “In most cases the low DO events have not increased in either frequency or severity, however the duration of the season has increased.”

“Oxygenation systems have been used in limited locations where we feel we get the greatest return on the investment,” says Thomson, adding that such systems are “dramatically more costly than aeration.”

A low dissolved oxygen (DO) situation can be a result of high plankton mass, high water temperatures, or an up welling of deeper low oxygen water.

It is standard practice to reduce feed during low-oxygen events so as not add the stress of digestion to the fish, but that too has an effect on growth. If oxygen levels fall too low, the fish die.