Consumer behavior is changing, so is aquaculture 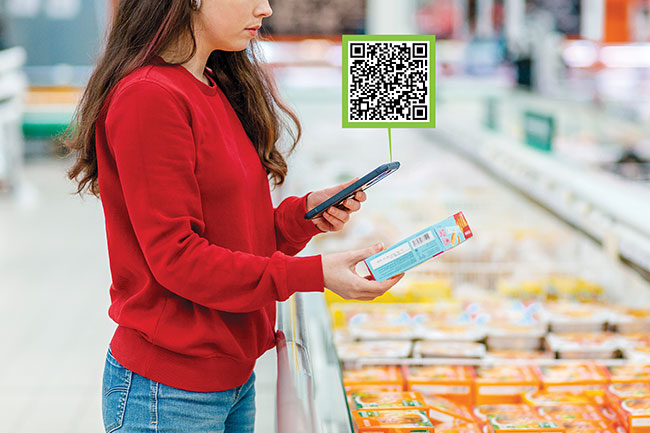 The time when a QR code on a package of seafood will reveal its carbon footprint is on the horizon Photo: © KUBE / Adobe Stock

The time when consumers can simply scan the QR code on a package of fish to find out its carbon footprint per serving size is not too far on the horizon.

Consumer shopping behavior is changing, with many now shopping consciously and demand for sustainable brands is rising, he says.

“In the early days, most consumers have not been very aware of sustainability issues, they were more of a B2B issue. Major buyers, like Walmart, set sustainability goals; from their chairman to their board of directors and down to their buyers, they are very aware of the issues and they work directly with certification programs to make sure the products they offer meet their criteria. But this is now moving toward the point where the eco-labels are recognized by consumers.”

Chamberlain’s observation squares with various consumer surveys pointing to shifting consumption behaviors. In one of them, over 60 percent of consumers surveyed by consultancy Accenture said they are now making more environmentally friendly, sustainable or ethical purchases.

He said future QR codes on the final packaging, when scanned, will enable the consumer to see the full provenance, sustainability credentials and more importantly, the product story: “Here’s a picture of the farmer, here’s how it was raised, here’s a map of where it came from. All that stuff is coming, even to the point where the nutritional label says the total fat, carbohydrate and sugar, cholesterol and greenhouse gas emissions per serving size.”

Chamberlain was speaking at an online forum this past fall, called Aquaculture: Seafood, hosted by Nonprofit Report founder Mark Oppenheim. Chamberlain and fellow panellists, Sebastian Belle, executive director of the Maine Aquaculture Association, and Jim Parsons, president of the Northwest Aquaculture Alliance, discussed the state of US aquaculture, with particular focus on the regulatory environment and consumer perception of farmed fish.

Belle noted that seafood is the only category of animal protein not farmed domestically as widely as other proteins, such as turkey, poultry or beef or swine, leading the United States import 90 percent of seafood from other countries. The emergence of international standards, he said, levels the playing field “because it essentially helps us compete and it raises the bar for farmers in other countries.”

Parsons acknowledged that the cost of regulations on US aquaculture represents a high percentage of the cost of doing business in the country. As Aquaculture North America reported earlier, a 2019 study on the regulatory costs on US salmonid farms showed annual regulatory costs per farm averaged $150,506, and $1.23 per pound. Small farmers are burdened the most – around 16 to 18 times more than large farms.

But it is because of these regulations that “there’s almost no better certification in the world than saying our aquaculture products are ‘US-Farm Raised’,” said Parsons.

Looking ahead, although the common approach to development has been to scale the industry, the three industry officials agreed it shouldn’t come at the expense of the environment.

Said Chamberlain: “I think that there’s a consensus that the way we do things now can’t be directly scaled; food production systems already account for 25 percent of greenhouse gas emissions. We’re already seeing that climate change is advancing and that we aren’t moving quickly enough. We can’t just scale what we’re doing. We have to find a different way, a greener, more efficient way. We can probably double (current production) but we need to do it in a way that generates a lot less impact per unit.”

“Eat seafood,” Parsons told the virtual audience.  “Be aware of what’s in your seafood case. Ask questions about it. Ask if it’s local, get to know some of the local aquaculture farmers in your area. Go, visit an aquaculture farm. We keep hearing this misnomer that we all have ‘factory farms’ out there and actually that’s very far from the truth. Aquaculture farmers are right in the water or down in the mud with their products. Get to know what we’re doing now.”